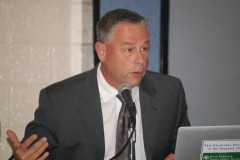 Before the Brick Township Board of Education convenes in public Thursday night, members will discuss the position of the interim superintendent, a copy of a meeting agenda shows.

Richard Caldes is currently serving as interim superintendent in the absence of Superintendent Walter Uszenski, who is suspended pending the outcome of a criminal case involving educational services provided to his grandchild. It is not clear whether the board will seek to oust Caldes from the position Thursday night, but for much of January, the district had been collecting resumes of candidates for the position.

According to information obtained after filing an Open Public Records Act request with the district, applications for the position began being accepted Jan. 12 and ended Jan. 26. Candidates were asked to provide a letter of interest and resume by that date.


The position advertised was an “anticipated vacancy for the 2015-16 school year,” the document said.

Caldes’ contract was extended through the end of the 2015-16 school year in Nov. 2015, however the agreement includes numerous termination clauses under which the board could appoint a new schools chief. Before taking over for Uszenski, Caldes served as Educational Specialist for the district. Prior to that role, he served as principal of Brick Memorial High School.

The public portion of the meeting begins at 7 p.m. Thursday night at the Brick Township High School auditorium.