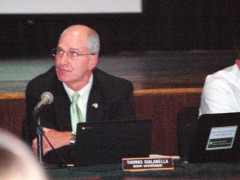 Brick Township school board members got strict instructions from the Ocean County Executive Superintendent of Schools heading into a meeting Monday following a failed attempt to introduce a spending plan last week.

“His instructions were that the meeting not adjourn until we have a tentative budget,” Interim Superintendent Thomas Gialanella told board members.

Five out of the seven members of the board turned down a tentative budget proposed by the district’s administration last Thursday. The budget would have used a loophole in the state’s tax cap law to raise expenditures by $7.1 million and hike taxes by $5.7 million. The board rejected the plan after residents criticized the level of spending and school officials gave conflicting accounts of how employee contracts will affect the budget going forward.

Gialanella, for his part, defended the increased spending and taxation, arguing that boards of education should approve budgets each year that increase expenditures and tax levies the maximum amount allowed by law. His comments drew the ire of multiple residents who attended the meeting, arguing that Gialanella, who earns a $177,000 equivalent salary plus a pension from a previous superintendent’s position in Jackson, was being “disingenuous” for calling for automatic tax increases each year.

Gialanella defended his comments, saying boards should “take advantage” of the 2 percent each year to avoid “losing ground.” Still, he left the door open to tweaks in the budget, which is expected to be subject to a formal hearing and final vote April 28.

“As we get closer to the April 28 date when the final budget is due, our pencils get a little bit sharper because we’ll have better numbers,” he said.

The meeting will begin at 6 p.m. at the Technology Training Center, a conference area in the central administration building at 101 Hendrickson Avenue.