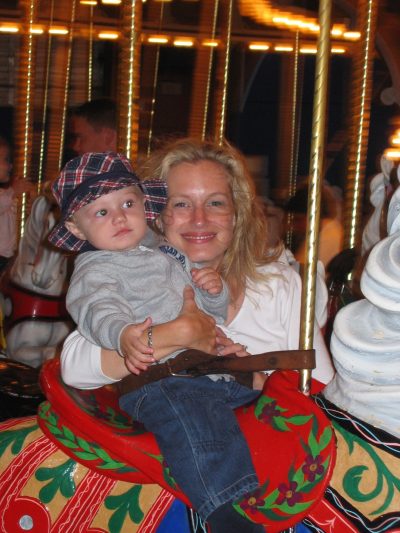 This week my boy turns thirteen.  He will be ushered into his teenaged years, that period which is supposed to be so difficult, so devoid of communication, so trying to one’s soul.  Here’s a secret though, shared between you and me.

I actually think we had his teenaged years when he was a toddler.  At least that’s what I’m hoping, because Mommy is a lot more tired now than she was a dozen years ago.

Justin became a “tween” two years ago, and I admit part of me was waiting for that other shoe to fall, for his aggression to return. I waited for his strong will to assert itself even more than before, for us to struggle to communicate with one another.  What I found however was except for when his OCD takes over, for the most part things have gotten so much easier.  The boy “who’d never sleep” runs to his bed each night.  We now last through entire movies at a theater, and even make it over an hour at the beach (I admit, it’s work, but we make it). When we travel to relatives’ houses he’ll do the “work” we bring along for him, and we’re usually good for three or so hours at a party.  He will amuse himself for long periods of time at home, either on his DVD player, the computer, or watching his favorite Baby Einstein videos on tv.


The truth is we’re not on 24/7 surveillance anymore.  And it is completely, utterly liberating.

So much has changed with him from the days where insomnia reigned, eating was for sissies, and my arms and legs bore those bluish/greenish/purplish patches on a frequent basis.  My boy has matured, has come into his own.

Echoes of his former self still exist.  He still can’t go for more than an hour without a hug or kiss.  He still loves some of the games of his “youth,” yet adores it when my husband sneaks up on him and tickles his tummy. He still revels in my singing his baby song to him each night.

Remnants of his past remain, as when he gets frustrated with his stupid parents who can’t figure out what he wants.  But with his burgeoning communication skills on his iPad these instances are much fewer and far between, and most of the time, that sweet boy I held curled like a comma in my arms still resides.

I love that sweet boy.

This week and next we will celebrate you (Mommy extends birthdays as long as humanly possible), and there is so much to be proud of, so much for us to rejoice in on your special day(s).

We celebrate how hard you work at school, how your perserverance has inspired so many around you.

We celebrate your ever-increasing vocabulary, because it eases your frustration and is always a thrill to hear.

We celebrate your tenacity when acquiring a new skill, how you won’t give up until you’ve mastered it.

We celebrate your abundant affection, which you bestow upon everyone in your posse.

We celebrate your intelligence, and the doors it’s opened to enrich your world.

Most of all we celebrate your unbridled joy in most of your moments, something I never thought I’d witness years ago.

Happiest of birthdays to my boy, we love you so much!