Brick Township’s real estate offerings include one of the widest ranges of options in New Jersey, from $60,000 condominiums to $5 million oceanfront estates. That economic reality is reflected in the township’s school system, a recent report from the state shows.

Included in the state Department of Education’s annual School Performance Reports for the 2014-15 school year are statistics on economic diversity and even the languages spoken at home by students’ families. What the reports show is a student body – depending on the school – that includes students from all walks of life.

As the township’s student body becomes more mixed at the middle and high school levels, elementary school reports are the best to glean information on the economic divide. The data shows that, while the Warren Wolf school is a relative outlier in terms of percentages, other schools have a significant share of their student bodies coming from economically disadvantaged homes, doubling that of other schools in the district.


Next to Warren Wolf, Osbornville Elementary School has the next-highest percentage of economically disadvantaged students, at 47.9 percent. Veterans Memorial Elementary School is similar, with 41.5 percent, and fourth is Emma Havens Young, with 41.1 percent. 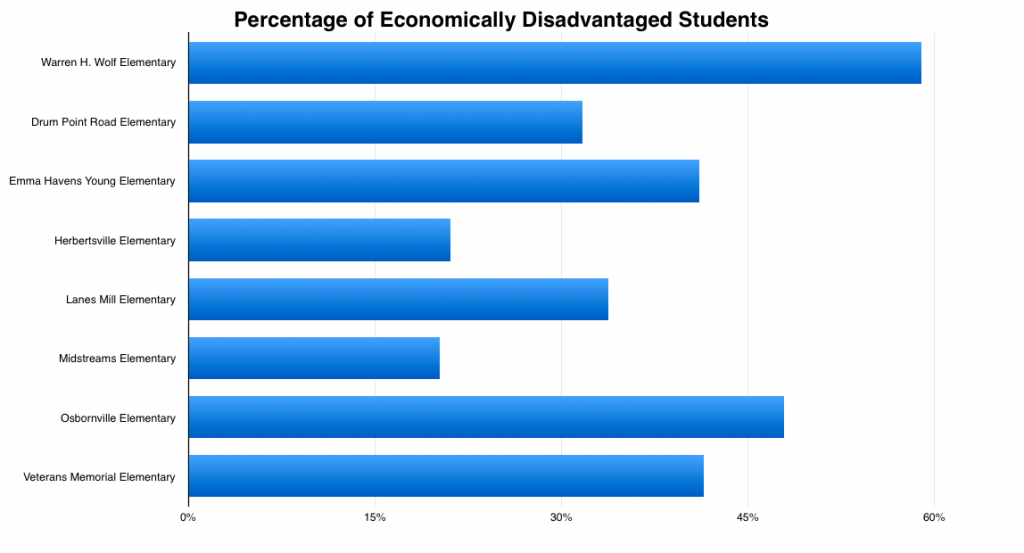 At a midpoint is Lanes Mill Elementary School, with 33.8 percent of students coming from low-income families, and Drum Point Road, with 31.7 percent.

The district’s two remaining elementary schools have much lower rates of economic disadvantage. Students at Midstreams Elementary School were the least likely to be economically disadvantaged – 20.2 percent of the student body is so classified – with a similar percentage of Herbertsville Elementary School student, at 21.2 percent.

Economic disadvantage, the data shows, does not always translate to the number of children who come from immigrant families that speak a language other than English at home. The school with the lowest percentage of students from English speaking families was Osbornville, at 82.9 percent, followed by Emma Havens Young, at 87 percent. All of the remaining schools ranged from 97 to 99 percent of students coming from English-speaking homes.