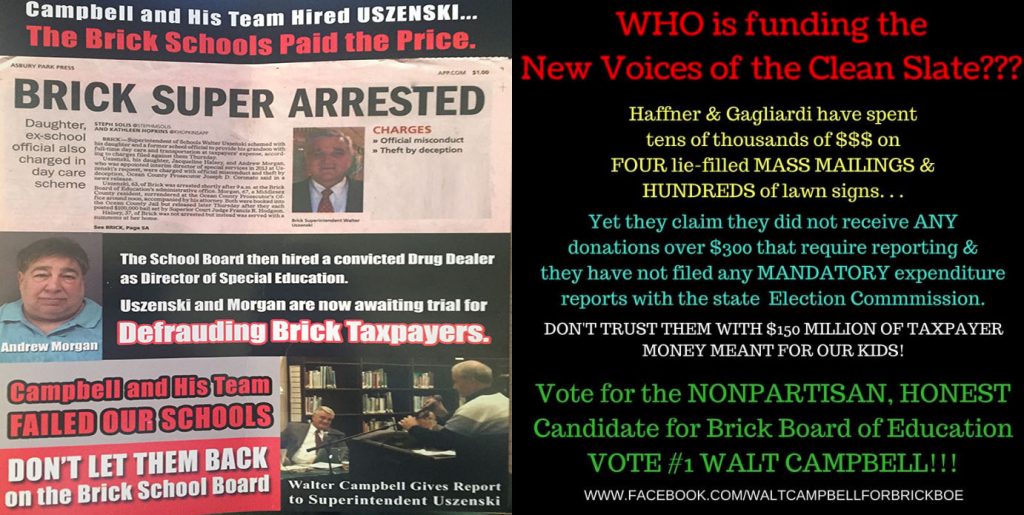 Advertisements released by two competing tickets for Brick school board in 2016. (File Photos)

This year’s race for two seats on the Brick Township Board of Education has turned nasty, with the usual flutter of glossy campaign ads, signs and allegations traded by opponents.

This round, most of the mud-slinging has been between Walter Campbell, running solo, and Daisy Haffner and Melita Gagliardi, running under the “New Voices for Brick” slogan and aligned with the current board majority.


Earlier this election season, we reported on duplicate advertisements and claims being made by candidates for school board in both Brick and Toms River. While board races are non-partisan in nature, it is common for parties to tacitly support some tickets of candidates. Shorebeat has learned that the Democrats have been supporting Haffner and Gagliardi, while the township’s Republican organization has been asking members to support Victor Finamore and John O’Rourke.

While all of the candidates for board seats this year have placed roadside campaign signs across town, only one ticket – Haffner and Gagliardi – have sent campaign mailers. The rest of the candidates have focused their campaign strategy on gaining a social media following. Campbell’s campaign has been the most vocal, part of a long-runnig dispute with the current board majority over volunteer work he completed for the district’s former Facilities Committee.

In the latest campaign mailer, the Haffner-Gagliardi ticket continued the dispute, but also invoked the case of suspended Superintendent Walter Uszenski, who has been accused of providing educational services for a grandchild who may not have been entitled to them.

The ad claims that “Campbell and His Team Hired Uszenski.” That claim is true. Campbell was a member of the Board of Education on May 29, 2012, when Uszenski was hired. Minutes for the May 29, 2012 meeting have been removed from the school district’s website, however reporters’ notes from the time indicated Campbell, along with Sharon Cantillo and former board members Larry Reid, Kim V. Terebush, Len Cuppari and Susan Suter voted in favor of the hiring.

Another claim in the ad is that “the school board then hired a convicted drug dealer as Director of Special Education.” While this statement is true, it is misleading. Campbell was no longer a member of the board when Andrew Morgan – who did, indeed, have a criminal record for drug offenses – was hired.

The advertisement also features a photo of Campbell standing at a lectern, addressing Uszenski, attempting to create a link between the two men. Through research, Shorebeat concluded that this photo was a screenshot from a video taken during the Dec. 17, 2013 Board of Education meeting. Campbell, who was not a member of the school board at the time, was giving public comments on facilities improvements in the district, since he was serving as a volunteer member of the Facilities Committee at the time.

The reverse side of the advertisement states, “The prior board wasted $1.5 million on the wrong windows – and nobody was held accountable.”

For a previous report, Shorebeat staff spend hours exhaustively combing through past meeting minutes and documents that were requested under the state’s Open Public Records Act. In conducting the research, we found no evidence to support the claim that the board decided on the “wrong” windows or went against the recommendation of an architect, as has been alleged in the past. The documentation showed that the the architect of record at the time, Jerry Rubino, provided information on two competing window systems, but never made a concrete recommendation on which one the board should purchase. One of the systems would have been cheaper upfront but inefficient, while another, more expensive option, could cost more upfront but would provide better energy efficiency over its lifespan. The committee ultimately chose the more expensive option.

You can read Shorebeat’s full report on the controversy here.

Campbell has also made allegations against his opponents through social media.

He alleges that Haffner and Gagliardi spent “tens of thousands of dollars” on four campaign ads this election season. Records obtained through the state Election Law Enforcement Commission database indicate that the Haffner-Gagliardi ticket raised $10,250 during the last several weeks of the campaign, primarily by transferring funds from their individual candidates’ accounts to a joint account.

“Yet they claim they did not receive any donations over $300 that require reporting,” the ad goes on to say. While it is true that the campaign has not reported contributions in excess of $300, there is no way to confirm Campbell’s allegation, and state election laws exempt . The campaign also alleges that the campaign had not “filed any mandatory expenditure reports” with the state. The Haffner-Gagliardi campaign has filed numerous disclosure reports this campaign cycle, including three “48-hour” reports listing last-minute influxes of money, as well as two “C-1” reports and a “D-2” report with the commission.

If a group of candidates spends more than $12,300, they must also file an R-1 form, which is a more complete accounting of the campaign’s donations and expenditures, and lists all contributions in excess of $300. If the campaign only received the $10,250 reported in the weeks leading up to the election, the filing of such a report would not be required.

Editor’s Note: As is customary, it is our policy to disable comments on stories on Election Day in order to prevent electioneering or unconfirmed allegations to be posted in the comments section.