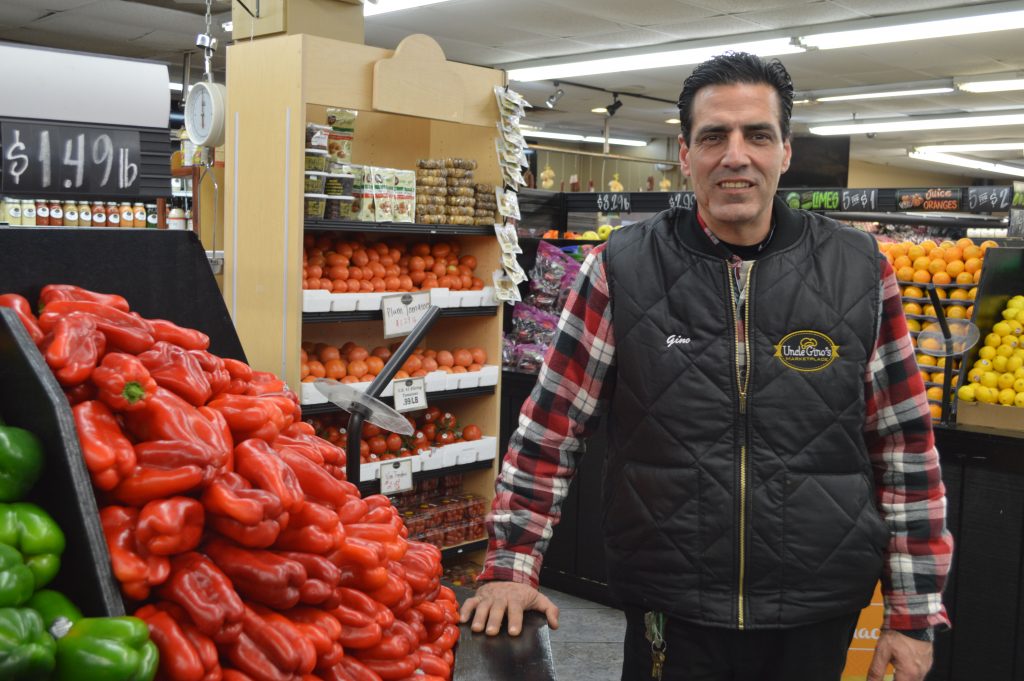 Gino Palummo’s father came to Brooklyn from Italy in 1968, leaving most of his family behind, and took a job as a stock boy at a local market. Four years later at age 19, he bought the store.

With that, the legacy of the family in the supermarket industry began. Palummo eventually brought his family to America and partnered with his brother to expand the business to seven Palummo Brothers stores in Brooklyn and Staten Island. His son, Gino, was born the same year the first store opened and he, too got into the business, eventually rising to vice president of Key Food, a large supermarket cooperative in New York.

After years in the industry, the younger Palummo thought it was time to go back to his roots. He opened his first store, Uncle Gino’s Market, in Manalapan in 2015 and opened his second store Nov. 1, 2016 in Brick at the former Top Tomato location.


“I came full circle, back into retail,” he told Shorebeat this week, explaining that what made him want to return to the local business was a lack of the old-time values, freshness and sense of community his father’s stores once had. “I’m honored when people walk in my store. They’re taking home food to put on the table to feed their mother, their father, their kids. It has to be quality.”

Customers one day this week strolled through the aisles of the 7,000 square foot retail space, picking up fresh produce, fresh meat and poultry, a full slate of food items, and a wide selection of prepared meals and soups offered daily. Though much smaller than Shop-Rite and other massive supermarkets, Palummo believes his store can compete on price and best the competition on freshness and one major intangible – trust.

“We handpick everything off the truck, he said. “We get deliveries seven days a week if we need to. Perishables are everything.”

Some items that can be left on the shelf for seven days are removed after four to guarantee customers receive the best quality products, Palummo said. But in addition to the food is service that is reminiscent of those stores his father and uncle once ran in New York during a different time.

“It’s a throwback,” Palummo said. “They tell me that it’s like the old days when they grew up in Brooklyn or Jersey City. You walked in the store and you knew the butcher, you knew the cashier, and everyone knew each others’ kids.”

Creating a second Uncle Gino’s Market in Brick has taken a tremendous amount of work. It’s not uncommon for Palummo to work seven days a week and put in 13 hour days. One staff member told a reporter Palummo personally oversees all of the store’s operations. In the short amount of time since taking over the Top Tomato space, Palummo said he has cleaned the entire store from top-to-bottom, powerwashed everything, added brighter lighting and new paint. A new floor is next on the list.

“We wanted to brighten is up,” he said.

In addition to buying and selling items, a special part of Uncle Gino’s Market involves making prepared dishes and side dishes each day. The food sold at the store are served on Palummo’s own table at home.

“I have an outstanding chef, plus my dad’s and my grandmother’s recipes,” he said, adding that the original chef at Top Tomato, who left to work at his store in Manalapan, has returned. “Our grab-and-go section is pretty big, and then we dedicated half our deli case to different things, like stuffed artichokes, stuffed peppers, all those thing you like but might not have the time to make.”

A catering menu is now in the works.

Polummo said the “Uncle Gino” name came from not only plenty of nieces and nephews, but the tendency of his own employees and friends of his kids to refer to him as such. A resident of Farmingdale, Palummo said he always becomes involved in the communities he serves, including donating food to organizations or youth sports pasta parties. But most of all, he said, trust is earned, and he’s in Brick for the long haul as his family business grows.