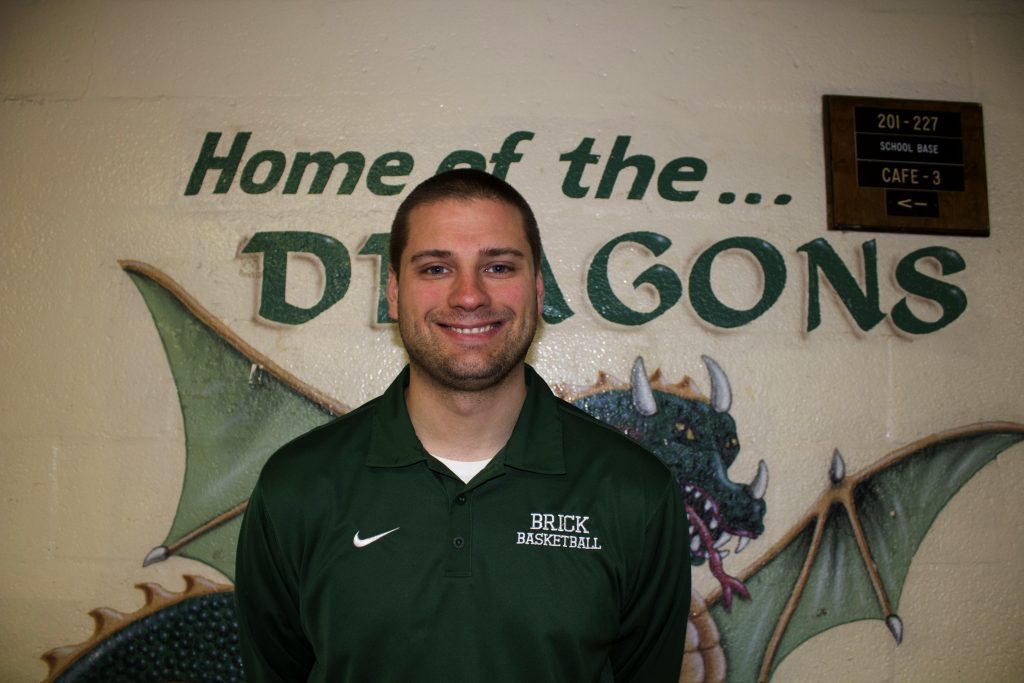 Mike Gawronski is proof that you can go home again.

Once upon a time Gawronski was a pretty fair player on the Brick Township High School boys basketball team. Now the Green Dragons’ head coach, he played well enough to score 1,315 career points for third on their career list. And his No. 14 jersey was retired by then-coach Joe Lewis. It’s the lone jersey to never be worn again in Brick boys basketball history.
Gawronski was a winner, too, as he led Brick to the Shore Conference Class A South title as a senior, graduating in 2007. The Green Dragons went 19-9 overall for their best record in program history.

“I was fortunate to have great teammates around me–guys like Tom Paterno, Tim Reddan and F.J. Lucchetti (now a Brick assistant coach),” Gawronski, 28, said. “It was easy for me to get great shots and luckily I made some of them. They gave me the opportunity to score as many points as I did. My teammates deserved the honor as much as I did.”


Gawronski has guided the Green Dragons to back-to-back winning seasons. Gawronski. who has completed his fifth season at the helm, led Brick to a 14-11 overall record. The Green Dragons went 7-7 for third place in the eight-team Shore Conference Class A South. They played in two postseason events, falling to Manasquan in the preliminary round of the Shore Conference Tournament and succumbing to Lawrence in the first round in NJSIAA Central Jersey Group III.

During the Christmas break, Brick competed in the four-team Monroe Tournament, beating the host school in overtime in the second game afer dropping the opener. The Green Dragons went 13-12 for the first winning campaign of Gawronski’s tenure.

“Brick is not known for being a basketball town,” said Gawronski, who was also assisted by Chris Cordiano, Joe Smyth and Chris Golden. “In our first two years here, the coaches would check us off as an automatic win. Now, they know they are going to be in for a battle. They know we will not be pushovers. Next, we hope to compete for the Class A South title and build the program up one step at a time.

“I am really enjoying myself. Coaching is a lot of fun. I am blessed with the coaches I have. They help me out tremendously. I love our players. They were a great group of kids. We never had any problems with discipline or with them not doing well in school.”

The team’s “heart and soul,” according to Gawronski, was Danny Venezia. The 5-foot-10 junior guard averaged 4.8 points and 4.8 rebounds per game through 25 outings. He handed out 56 assists. Venezia is a two-year varsity starter.

“He was not going to start as a sophomore,” Gawronski said. “but he proved me wrong. He played great defense and worked his butt off in practice. He was not afraid to get on loose balls.”

Venezia came up big in a win over Brick Memorial.

“He scored 15 points in the fourth quarter to help us win the game,” Gawronski said. “He knew we needed help and he was able to take over the game.”

Gawronski said Venezia is a solid young man off the court.

“He’s a straight A student and a member of the Fellowship of Christian Athletes and the National Honor Society,” Gawronski said. “He hopes to attend Navy (the United States Naval Academy). He should be able to get in as he is that type of a kid.”

Shane Williams, a 6-foot-3 sophomore guard, led Brick in scoring, averaging 14.4 points per game. He picked off an average of 8.6 misfires per contest and handed out 73 assists through 25 games. He shot 71 percent (44-for-62) from the foul line.

“He easily can be one of the best players to come out of Brick–if not the best,” Gawronski said. “He started a couple of games for us as a freshman. He can take over a game at both ends of the floor. He did not play like a sophomore. We’re looking at him as a future all-shore player and a 1,000 career points scorer. So far, he has scored 493 career varsity points. He has a big year ahead of himself in terms of being the focal point of our offense as he can score in a variety of ways.
“He has the mid-range game and he can pull up and hit the shot. A lot of guards try to keep him out of the paint, but he has the best footwork I have ever seen from a young player. He has a couple of different post moves. He needs to work on his ball handling. He is difficult to guard. When teams double teamed him, he showed great court vision and was able to find the open man, giving us a lot of open shots.”

Noah Buono was another productive player, scoring a norm of 12.6 points per outing and averaging 7.6 rebounds per game while dishing off 53 assists. Buono gave the Green Dragons a 6-foot-5 senior guard.

“He was definitely a versatile player,” Gawronski said. “He is long connected and can shoot. He has great range. He had either five or six 20-point games for us. He shoots the ball very well off screens and off the dribble. He is a gym rat. He always worked on his game. He would put up shots–even after our shoot around in practice. We beat Wall badly on a Saturday and he did not play well. I saw him on a shooting machine putting up extra shots after the game. That shows the type of dedication he had to the program.”

Senior point guard Brandon Williams finished among the top three players in the Shore Conference in assists with 162. The 5-foot-10 Williams averaged 6.7 points and 3.0 rebounds per games. He is the brother of Shane Williams.

“Brandon was our glue guy to be honest,” Gawronski said. “Our team knew we would go as far as he would take us. He has phenomenal court vision. He was like a coach on the court. One of the things we loved about him was we could put him on any guard and he would not only slow him down, but shut him down. He was our best defensive player. I gave him the keys to the car and he ran the show for a lot of the time.”

One of Class A South’s tallest players was Anthony DeStefano, a 6-foot-6 senior forward. He averaged 8.7 points and 5.3 rebounds per game and handed out 13 assists through 25 games.

“He made a huge improvement from last season in terms of statistics and as a leader,” Gawronski said. “He was our big man in the paint. He blocked a ton of shots and had either eight or nine blocks on put backs and alley-oops. He was a freak of an athlete as he has a great 17-foot shot and big men did not want to guard him. He was pretty much automatic at all times. He had some huge games for us.”

Doug Boor, a 6-foot-1 senior guard, averaged 4.1 points and 2.7 rebounds per game and handed out nine assists through 25 games.

“He was our biggest surprise this year,” Gawronski said. “He shut his mouth for four years and knocked down threes (18 this season). He gave us an energetic boost off the bench.”

Gawronski will serve as one of two coaches of the East team, which will oppose the West club in the Boys Senior All-Star Basketball Game on Thursday, March 23 at 7:45 p.m. at the Pine Belt Arena in Toms River. Brandon Williams will be a West alternate.

Shane Williams and Brandon Williams were named to the All-Class A South first and second teams, respectively. The honorees were chosen by the Shore Conference Basketball Coaches Association. 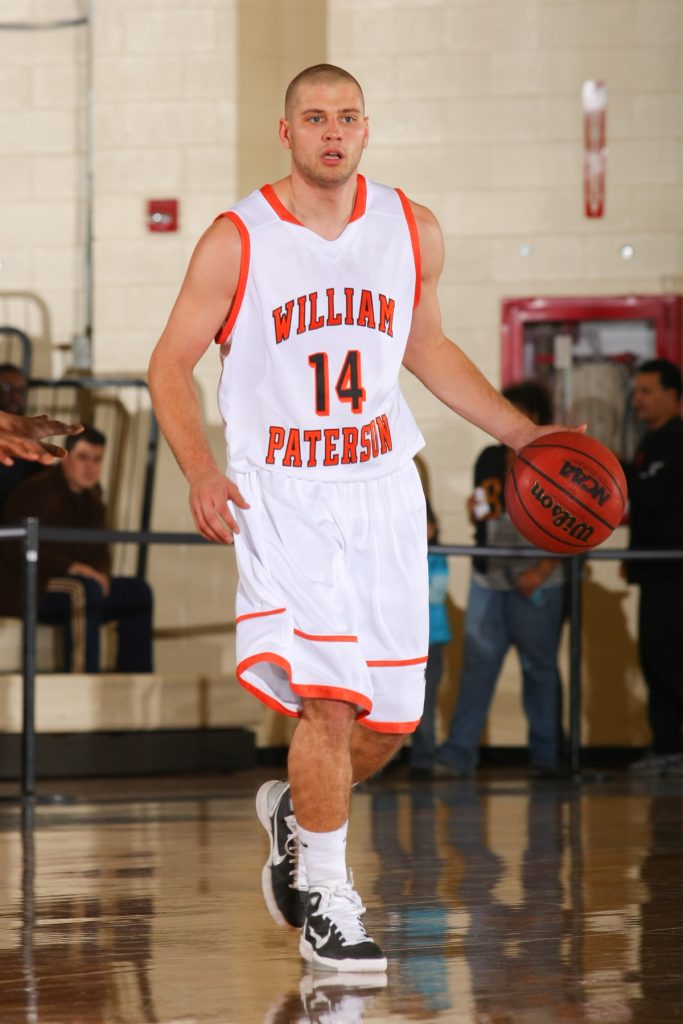 Gawronski played four varsity seasons for the William Paterson University Pioneers. He competed on one New Jersey Athletic Conference Tournament championship team. He was an assistant coach at the NCAA Division III school when it captured one NJAC Tournament. Gawronski, who received a Bachelor of Arts Degree in business management in 2012, teaches business subjects at Brick.

“It’s truly a blessing each day when I go to work,” he said. “It’s a blessing to coach at the school that really changed my life. To look up at that championship banner from my senior year and to have the opportunity to get the program back to where it was is a great challenge. I hope to be here for a long, long time.”