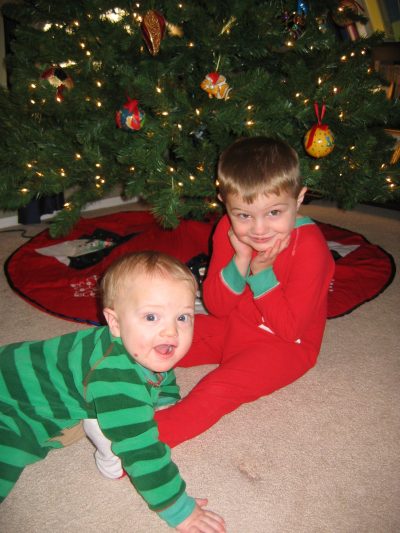 This coming Sunday I will celebrate my fourteenth Mother’s Day as a mom, and I thought it would be nice if I wrote you both a little note to say thanks for making me one.

I’m not quite sure how it happened that I have a teenager and another kid in double digits when I still feel (inside!) like I’m twenty-five, but here we are.

I always wanted to be a mom. Although I wasn’t so much into Barbies and dolls when I was little I was into your uncle (until he could move around and get into my stuff), and I just naturally gravitated toward babies and kids. Actually liking children was one of the reasons I ended up being a teacher (there were others, the phenomenal pay was not one), and from an early age I knew I wanted two. One of the things that cemented my relationship with your father was that he knew he and his wife should never be outnumbered by their progeny.

He was a keeper.

If you haven’t realized this by now your mom is a planner, and I admit I once had a different idea of how things were going to turn out. I learned a lot from being an educator, as in only hope for happy and healthy, which, despite autism, I got.

And for that boys, I am eternally grateful.

I admit, that twenty-something year plan I had in mind did not include autism. I did not think I’d have two kids with the disorder, one mildly affected, one severe. Autism was just not on my radar. I’d had a few students with Aspergers in my career, and occasionally there’d be something about an autistic savant on tv, but autism wasn’t really a household world at the turn of the century.

Although I’m certain that for those families with kids who have it, it was.

So when I was carrying you Justin I never often entertained that any of my kids would be autistic, or would have anything more to worry about than possibly being very short (a gift from me) or a bit clumsy (a gift from Dad). I really felt like if I gave both my kids a five star womb hotel it would all work out. I thought I had some control.

But the truth is the universe had a different plan in mind for all of us. Justin, you really showed signs from birth, signs like not sleeping and awful reflux that we attributed to colic and being a difficult baby. Zach, you developed typically until eighteen month when following an illness you lost all your works, developed a rash along the entirety of your body, and most distressing, lost the light in your eyes.

Honestly, you two really made me work for that mom title. I initially thought I’d have a leg up on parenthood after teaching all those years, but as John Snow would say, “I knew nothing.” For years, I worried you two would never sleep (that worry was for me and your dad too). I worried you’d never eat anything other than a carb (and while I get that urge, it’s not always the healthiest path to take). I worried you’d never have friends. I worried we’d never be close (I could have ditched that one early). I worried you’d both never be happy.

Years passed (some required more chocolate and wine than others), and somehow, without my noticing it, life became easier. Justin, when you are not in the throes of an OCD obsession you are productive, happy, content. Zach, as you’ve matured it’s become so much easier for you to navigate school, social situations, and those ever-increasing life choices. I still carry the worry, don’t get me wrong. Every single day I worry about creating a stellar life plan for your adulthood Justin. Zach, I still worry sometimes about your life plans of a wife, kids, college, and owning the rights to Minecraft (it’s good to have dreams).

I still worry. I always will. But I can honestly tell you at this present time I no longer carry around the dread.

Zach, I want to thank you for being such a help with your big brother (even though sometimes you don’t want to).

Justin, I want to thank you for working so hard and for the stellar behavior you display for everyone at your treasured school.

Zach, I want to thank you for always challenging me to see things from a different point of view, and for widening my world.

Justin, I want to thank you for teaching me patience and the ability to open my mind to different kinds of happiness.

Zach, I want to thank you for your infectious laugh and for not making fun of me for having to google answers to all of your many questions.

Justin, I thank you for the glory that is your “nighttime self,” for the satisfied grin and kiss you bestow on me every night, and the fierce hug I get before you slip into slumber.

I love you both.