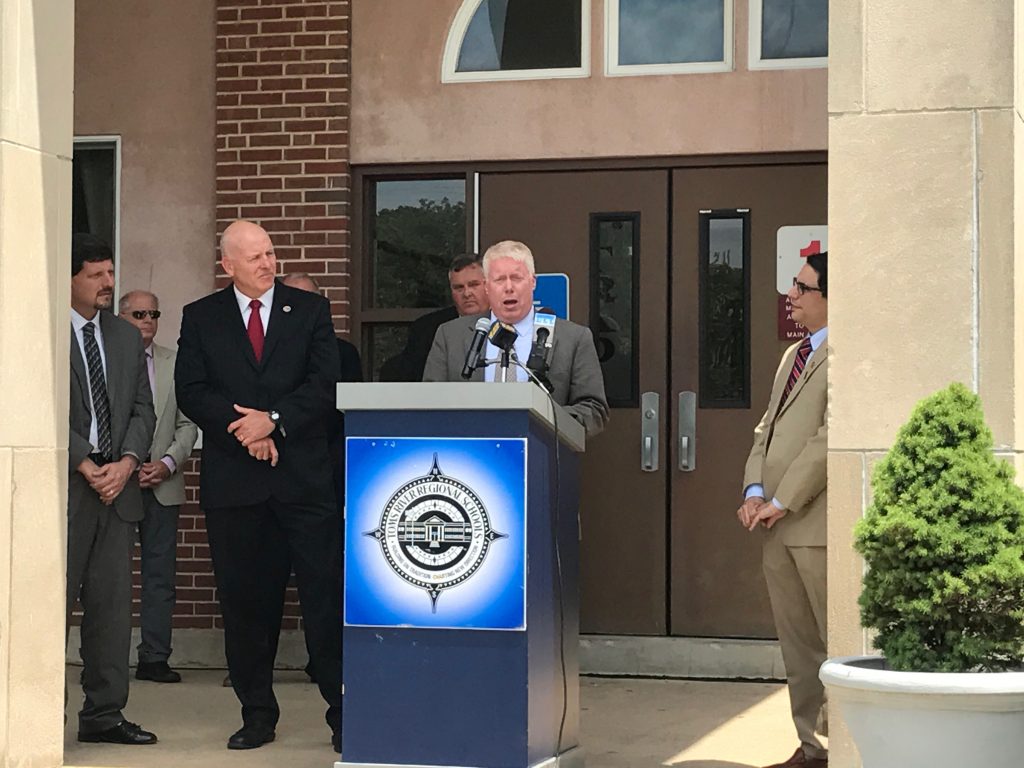 Brick would see its state aid cut by $2.2 million and neighboring Toms River’s aid would be cut to the tune of $3.3 million under the plan hatched by the two Democratic legislative leaders. Most of the officials from both towns who gathered at Toms River High School South on Wednesday called on Gov. Chris Christie, a Republican, to veto the plan if aid is not restored.

“Our school board is standing in full opposition to this so-called fair funding plan,” said Toms River Regional school board president Ben Giovine. “We call on our legislative leaders to work in a bipartisan fashion to find a formula that is fair to all of our diverse districts in our great state. Failing that, we would call on our governor to veto this plan outright.”

“At the end of the day, this was not a legislative plan,” said Holzapfel. “This was a plan that was designed by two people – Senate President Sweeney and Speaker Prieto.”

Holzapfel said out of $140 million in new school spending statewide under the plan, $100 million in additional funds will be sent to Democratic districts, while districts such as Brick and Toms River will see cuts.

Brick Mayor John Ducey, a Democrat, joined GOP elected officials in asking for the funding plan to either be modified to restore the aid or turned down completely.

Ducey said Brick and Toms River residents have already faced storm cleanup costs, a tax base that has not recovered, and were punished with the state’s gas tax increase last year since residents of the two towns are most likely to commute to work.

“Fairness is every single community being treated the same,” Ducey said, calling on Christie to veto the school funding portion of the budget if state aid is not restored.

Students Will Suffer Most

Interim Brick Township schools superintendent Thomas Gialanella said the district’s budget and tax rate has already been set for the  2017-18 school year, and if the cuts go through, officials would be left with no choice but to reallocate funds and, potentially, cut staffing and programs.

“We’re in the midst of hiring right now for our budget that was approved in March,” said Gialanella. “We’ve already planned and hired people for the programs – what can we do now?”

“Will this affect kids? Yes,” he continued. “There will be cuts to programs we will not be able to sustain.”

“We’re going to be looking at staffing issues, larger class sizes and cutting programs,” he said. “It is really beyond comprehension that you can start talking about those types of cuts days before the budget goes into affect.”

Gialanella, like his colleague Toms River Superintendent David Healy, also said athletic programs will come under review. Healy said “pay to play” fees could be an option. Gialanella said he’d like to avoid that scenario.

“I think when you go to those extremes, you start to lose support from your community,” he said. “You don’t want to punish kids or parents for playing a sport or being in the band.”

Gialanella said neither he nor the Board of Education favors changing the tax rate, an option that to his knowledge is not available in the first place.

“The Board, in collaboration with the Administration worked hard to keep our tax rate low, prepared a budget that provides an excellent opportunity for our students, and makes some much needed capital improvements,” Board of Education President John Lamela said in a prepared statement. ” Now in late June we are told that we will lose almost $2.2 million dollars which will result in making deep cuts. At this late date it is not only unfair but will hurt the students of Brick Township.”