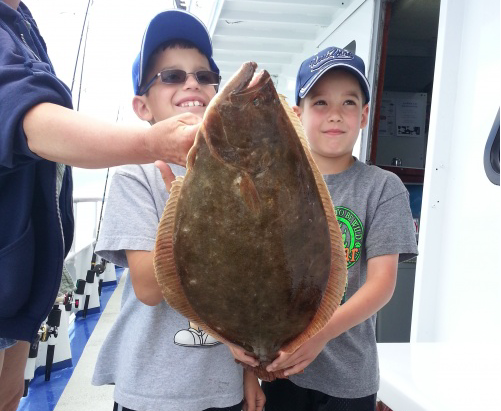 Two happy, young anglers with their catch on board the Norma-K out of Point Pleasant. (Photo: Norma-K crew.)

Sharkin’ from shore is heating up, reports from across the area said this week, but fluke fishing has been slow in the back bay areas.


The bite has largely depended on the species being targeted, anglers reported over the last week, with blues and small sharks accounting for a good chunk of the catch.

“The big bluefish have moved back in the area after three days of northeast winds,” a report from Grumpy’s Tackle said Thursday. “Reports of bluefish 8-14 lbs. were taken on bunker and mullet.”

The blues were mainly being caught in the suds, though the back bay was still holding an occasional snapper here and there, reports said.

But sharking was the activity that has really heated up in the last week. Sand tigers were caught off Island Beach State Park and other local beaches, primarily on fresh bunker, with one angler reporting to Grumpy’s that he fought a fish for 30 minutes before landing it.

“Night tides are seeing more and more shark activity,” a report from The Dock Outfitters in Seaside Heights said. “Heavy wire, large hook surf rigs, baited with a whole or half of a large bait fish is the way to go.”

Good shark fishing (at night) was also reported to the folks at Murphy’s Hook House in Toms River.

While sharks are a fun species to battle, most anglers are after fluke this time of year. The tasty bottom fish has been more elusive than in the recent past, with the back bay bite cooler than it’s been in quite a while. Strong westerly and southerly winds have been blamed for the slow bite (in some areas) and ocean temperatures much cooler than usual may have spooked the species away from some of its usual seasonal haunts, many have surmised.

Still, some fish have been caught in the right place at the right time.

“As normal for this time of year in the surf, small blues mostly on cut baits with fluke moving in and out of the cuts, pouncing on bucktails and all sorts of strip and live bait combos,” the report from The Dock said.

Over the last few days, ocean water temperatures have gotten warmer, so it can be predicted that the bite will re-energize in its usual locations. But because of the odd start to the season, the best bet for a catch might be in shallower, warmer waters on an incoming tide. In the ocean, it is likely that the reefs will hold fish as they usually do now that the temperatures have improved and the winds have calmed down to what we’re used to.

On board the Gambler party boat from Point Pleasant, keeper fluke up to 4-pounds and keeper sea bass up to 3-pounds have been biting, with the action changing a bit day-to-day on the fluke. Anglers on board were also catching hake, sea robbins and sand sharks during the trips.

A strong current may have accounted for a so-so day on board the Norma-K in Point Pleasant earlier this week, but with the waters calmed down, anglers began finding fish, a report said.

“Fish have been caught on whole squid and bucktails,” a report said. “We are fishing in rough bottom so be sure to bring extra tackle with you.”

It will be an interesting weekend of fishing, as the unusual weather and strong winds have largely moved out, giving anglers the first opportunity for some normal patterns of fishing to emerge. We may do a mid-weekend report to update you when we hear what’s happening.

As always, we welcome your catch photos and tips. Show off your photos by sending them to daniel@shorebeat.com.