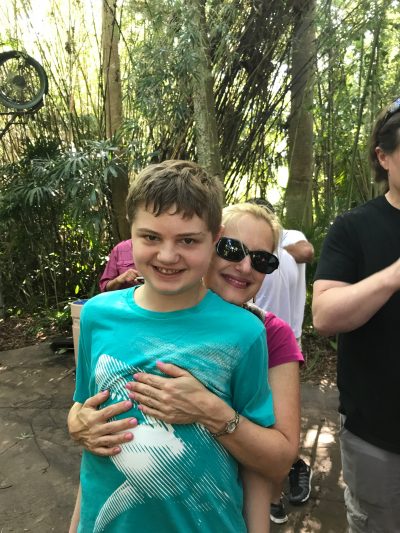 It’s that time again folks- time for my post-mortem on our semi-annual Disney trip with the McCafferty clan.

Just in case someone’s eyes are starting to roll in a “nice that they can afford this” way, I will send a shout out to Grandma who paid for most of this trip, and to whom we are all eternally grateful that I even have the opportunity to take my kids on vacation.


And while I’m being thankful, I must include Justin.

This year we changed things up a bit and went to Magic Kingdom one day, and Universal Studios for two days. We had never been to Universal before, and to tell you the truth I held my breath on this one, as sometimes new things are not Justin’s forte.

Yup, even when that something new is an amazing amusement park.

I will share with you all here that he was magnificent. I will also share with you all that I had practically every minute of our three day trip planned for maximum “Justin enjoyment,” which was absolutely necessary. I knew where we’d eat each day and what time. I had a plan B that included half our group with a planned itinerary of what to do if Justin found the Harry Potter attractions to be of no interest. I had sketched out which rides and attractions we’d probably do and in what order. I even built in bathroom breaks.

In other words, I was in my A-type glory.

Taking in the sites is also not Justin’s forte.

We had the same success at Universal, but I will tell you that the real reason we were able to enjoy the trip and I was able to see the joy on my youngest son’s face when he visited Diagon Alley and Hogsmeade was Justin. Our first two trips to Florida were somewhat rocky with him, ranging from issues on the plane to sleeping to asking to go home every two seconds. This year it was as if the gods aligned for everything to come together. Except for the first night Justin slept as well as humanly possible in a bed not his own. He wasn’t ill. He waited. He was patient. He didn’t try to escape activities that held no interest for him.

I know. I need a moment for that last sentence.

And I will tell you this. Disney/Universal are really the only places we can go on a family vacation where Justin will be engaged, and not hanging out in our hotel room pacing all day with a frustrated adult in attendance. Vacation spots which would hold great interest to most families hold none for my boy- it would not even be worth the money to try. The truth is I want this family to have vacation memories too, despite the risks taking Justin on a plane, despite the uncertainty that he’ll sleep, despite the unknown of whether or not he’ll enjoy himself. I always feel a lot is riding on these trips- the chance for Justin to try a different environment, and just the plain old opportunity to have fun.

There are so many factors that went into making this trip successful. Planning. Good weather. Fairly low attendance at the parks. Justin’s innate desire to have fun. His ability to wait.

His ability to be somewhat flexible. I know, can’t believe I wrote that one down either.

All of the latter reasons have come about because of so many different reasons, but I believe we had a successful vacation is because from a very early age, even when it seemed impossible, we exposed Justin to different places, and made him learn how to wait. I will tell you that I have little half-moon scars from his tiny teeth on my shoulders from way back when where Justin expressed his extreme displeasure at being somewhere most kids would decide was fun. His teachers, father and I persevered, and eventually I had a kid running up to me with sneakers in hand (often at inopportune moments like Christmas or 8:00 PM) begging to go out. It was years before this happened.

And it was worth every grueling moment.

The point of this missive? Get out. Have help if you can. Have a plan B, C, and D. When people offer assistance take them up on helping you take your child out on an errand, to a meal, to something that ostensibly should be fun. I will tell you that leaving the house with Justin was soul-sucking hard for years, and now it is mostly a joy.

My final piece of advice?

Get out, and don’t give up.