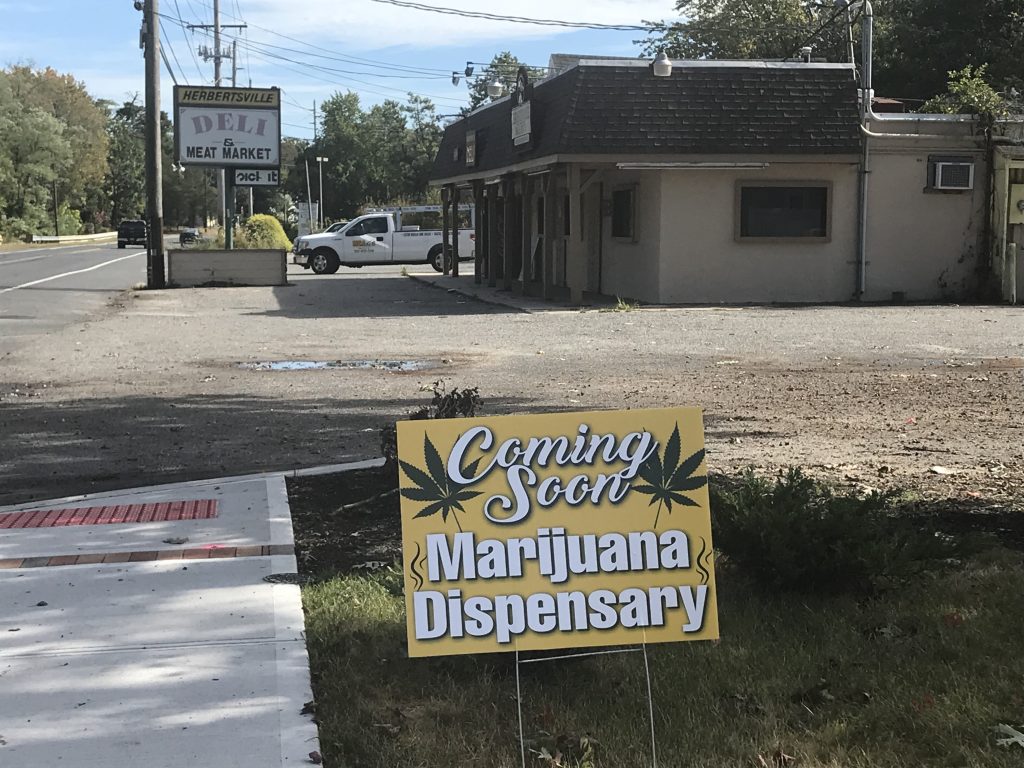 Last month, a group of pranksters placed a sign outside the closed Herbertsville Deli site, promising a marijuana dispensary would soon open. But next time around, it may not be a joke at all. Brick officials will soon have to debate what their counterparts in Colorado have been struggling with since marijuana was legalized there in 2014: where weed can be purchased.

With Governor-elect Phil Murphy having made the legalization of recreational marijuana a top priority in his campaign, the question as to whether pot will be legal in New Jersey is largely answered. The legislature has already passed legalization measures, which were blocked by Gov. Chris Christie. Murphy, however, has said he would sign a bill to legalize the recreational sale and use of cannabis. The debate, as it did in Colorado, will almost certainly shift to zoning – a usually mundane area of local governance that will play a key role in determining how the local pot industry develops.

“We haven’t tackled that issue at all, yet,” said Mayor John Ducey, who was re-elected to a second term as mayor Tuesday. “We have plenty of issues in the forefront, so we’ll see what happens if and when a law is passed.”


Colorado’s zoning policies have generated controversy there. In Denver, specifically, there are regulations that prohibit dispensaries from being operated in mixed-use or residential areas, the Denver Post reported. Specifically, they are allowed to operate in commercial and industrial zones.

A University of Colorado study found that cities have, indeed, formulated regulations closely restricting where dispensaries can operate. In the university’s report, researchers focused on how the businesses are often pushed into minority neighborhoods – a largely moot point in a town like Brick, where 93 percent of residents are white – but also focused on local control of the pot business.

“Though technically medical marijuana dispensaries provide a healthcare service, they have historically been required to adopt the same zoning restrictions as businesses that sell alcohol, pornography, and firearms,” said Jeremy Németh, Associate Professor and Chair of the Department of Planning and Design. “Generally, stores that sell these types of ‘vices’ are prohibited from locating in residential or mixed-use neighborhoods and are pushed into much less affluent neighborhoods.”

So-called “proximity buffers” were worked into Colorado’s law, allowing towns to restrict the sale of marijuana near parks, beaches and schools – similar to the regulations included in New Jersey’s own medical marijuana law.

In some cases, residents whose homes are located near commercial or industrial zones have complained about the smell of marijuana as well as an uptick in traffic in their neighborhoods.

Experts have said New Jersey could generate about $300 million per year in revenue by legalizing recreational marijuana sales, and end up cutting the cost of enforcement that is often borne by local police departments and municipal courts.

In 2016, Brick police charged 143 adults and 23 juveniles with marijuana possession – not including those who were charged with selling the drug – and through Sept. 30 of this year, 162 adults and 22 juveniles have been received summonses for possessing under 50 grams of cannabis.

The average charge rate for marijuana offenses as a whole in Ocean County was 208 per 100,000 residents in 2014, according to a study released earlier this year by the American Civil Liberties Union. In Brick, the rate was 202 per 100,000. Seaside Park had the highest charge rate in New Jersey, at more than 5,000 per 100,000 equivalent residents.

Brick zoning officials who spoke with Shorebeat said if a legalization law is passed, it will likely include zoning guidelines for municipalities, and towns can piggyback on each other to develop best practices.

Brick, in particular, has had a history of regulating controversial businesses. It was one of the first towns in the state to place an outright ban on puppy sales, effectively ending the business model of the one remaining business of its kind in the township. But there is even more history when it comes to the business of vice.

In 1992, Shay Varone filed plans to open the Pleasure Zone adult bookstore on Chambers Bridge Road, and immediate drew ire from residents and officials. Brick quickly adopted an ordinance that banned adult bookstores within 1,500 feet of schools, homes and churches. Judge William Huber ruled in favor of allowing the business to remain.

Eventually, another controversial business may look to open in Brick.

“As medical marijuana has become legal in 23 states and D.C., municipalities must determine where these businesses will be allowed to operate,” said Németh. “I encourage my students, and city planners, to think about the impacts zoning regulations have on the entire community, not just adopt regulations that have been in place for other vices.”