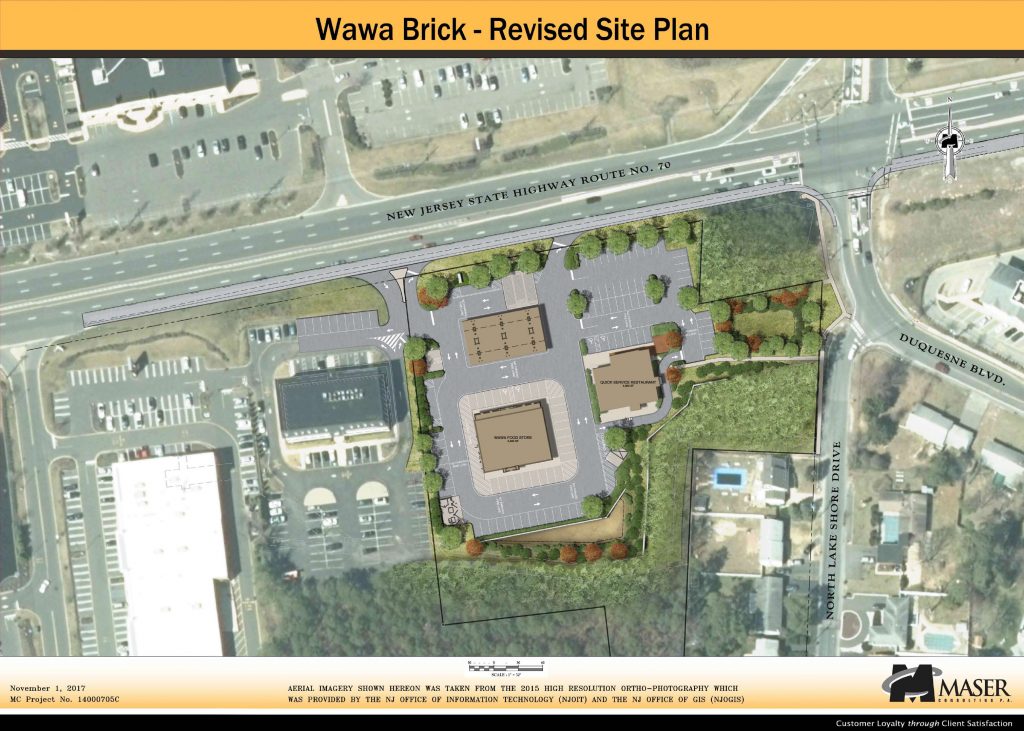 A controversial application before the township’s zoning board was decided in favor of the developers of a proposed Wawa store, gas station and quick-serve restaurant at the corner of Route 70 and Duquesne Boulevard.

After failing to gain a supermajority of members of Brick’s Zoning Board of Adjustment earlier this year, Paramount Realty Services’ revised application received a unanimous approval vote Wednesday night. The application was taken after a four hour-long meeting – still far shorter than the months-long marathon of meetings that were held before the previous denial. A total of 12 residents, mostly from the Lake Riviera neighborhood, spoke out against the plan, or expressed concerns over it.

A number of changes to the development plan for the site quelled the concerns of some residents and was enough to convince additional board members that the project would not have a negative impact on the township. The main component of the revised plan was the elimination of an entrance and exit directly onto North Lake Shore Drive from the shopping plaza. During the previous proposal, many residents expressed concern that traffic in Lake Riviera would increase if drivers used the local streets as a cut-through the Wawa. Under the new plan, the only access to the site will be from a newly-constructed driveway directly off Route 70, which will be shared with a medical building next door, said John Jackson, the attorney for Paramount.


The new proposal also reduced the size of the quick-serve restaurant component of the site – rumored to be a Panera Bread location – and removed all development from a residential lot. The site’s signage was reduced under the new plan, and a new eight foot-high sound wall is to be located. The wall will be longer than the previously-proposed wall, and will be made of a new material that will absorb sound rather than reflect it, improving its effectiveness. The developers also purchased one residential home that borders a wooded area closest to the site, and said they plan on selling it or renting it. Reducing the size of the restaurant also improved the situation for neighbors, the applicants’ witnesses said.

“What that has enabled us to do is to put an extra row of landscaping between the parking lot and the sound wall,” said Jackson.

The Wawa will have extra large – up to 36-feet in width – lanes for travel through the parking lot, and will have entrances in both the front and rear.

“That discourages illicit activity since there will be regular activity there, not just loading and unloading,” engineer Jeromie Lange said, describing the rear door.

Paramount also pledged to add a third lane to Route 70 from the Costco site to Duquesne, where it would ultimately continue farther down the highway.

The concessions by Paramount, which will sign a 20-year lease with Wawa, were not enough to assuage the fear of several residents of Lake Riviera.

“It’s definitely going to bring more traffic to the area,” said Tony Zurica. “A lot of people coming out of the place will make a right onto Duquesne to get to Brick Boulevard. It’s going to diminish our property values.”

Zurica also said he was against the fact that Wawa would be open 24 hours a day.

“Twenty-four hour establishments tend to bring less than desirable people to the area,” he said.

Lange, however, said criminal activity will likely be reduced since the area will now be developed with an active business instead of the dark wooded area that encompasses the site now.

Other residents brought up concerns over the safety of the gas station’s equipment as well as potential runoff from the site. Lange said the filling station will be covered and elevated to prevent runoff, and the tanks are double-surfaced with a liquid in the middle that trips a computer if even the tiniest leak was to occur.

There is just one variable remaining: approval from the township’s fire bureau. The Bureau of Fire Safety had requested a second access point to the site for fire trucks. Since Paramount removed the second driveway, they may need to make concessions elsewhere to appease the fire inspectors, or build a gravel or grass-covered access point from Lake Shore. If any deviation from the plan approved Wednesday night is ordered, Paramount must return to the board to request approval, Board Chairman Harvey Langer said.