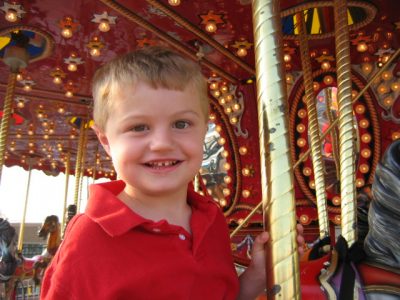 My heart hears the sounds first.

For five months I’ve been longing to hear his vocal stims, that eternal “eeeee” which punctuates his delight in whatever activity he’s engaged in at the time. Since October I’ve listened to the sounds slowly fade away, to be replaced by a boy bending over at the waist and fluttering his eyelids, hands clenched as he is swept up in a neurological maelstrom he can’t control. We’ve intervened as he’s attempted to climb into the bathtub fully clothed to submit to his brain’s will, countered him time and time again on the coldest and wettest days to prevent him from escaping outside in his socks to surrender. His episodes have happened in the car, in the movies, at meal time, while getting on the bus- the list is endless.

The only time he’s never had one was when he was seeking comfort in my arms.


It’s gotten so that Jeff and I hate to leave a room he’s in when he’s in his “normal” mode; we are loathe to leave because of the suffering we might see upon our return. We tried a medication for eight weeks and watched him steadily worsen, a period of time in which we gathered the opinions of other professionals from various disciplines in case Justin didn’t have what we were treating him for. Of course the four practitioners we chose split evenly between two different diagnoses, which meant that my husband and I had to decide on what we thought he had and hence the treatment for it.

With one disorder we might not know results for months. With the other we could know immediately if the medication was working. Plus, this one was life-threatening.

Not so much a Sophie’s Choice.

So we took a leap of faith and took the advice of a doctor we’ve yet to meet other than on email and started him on a new medication a little over a week ago, fingers and toes crossed, praying we could alleviate this hell for our boy.

My heart heard the absence of silence first.

When not suffering from what we believe is autism-related catatonia, Justin is lustily vocal. It is often how I track him around the house, his “eeees accentuating his joy in any given moment. That illusive vowel came back first as I followed him compulsively around our home, keeping vigil on his body movements, hoping the quick response to his medication was neither imagined nor short-lived. His natural movements, the hand flapping, “Rain Man-style” rocking back and forth returned to our collective glee. Yesterday we went fifteen hours without an episode, and someone was watching him every moment. We rejoiced in both the absence of episodes and the return of “his normal,” knowing we’d need more time to make sure this treatment plan has truly worked.

For the past five months I’ve been living with the shell of my son. Almost completely vanished were his random kisses, his requests to dance with me, his insistence on our mutually beneficial hugs. Most importantly what broke our hearts was the slow slipping away of his smile, the one he reserves for those in his inner posse and the one he exhibits solely to show his exuberance for the world. I really, really, missed that grin.

Slowly, after a few days of treatment, his illuminating smile came back.

Catatonia occurs in 12-18% of autistic individuals, and often has its onset around puberty, within which Justin is firmly ensconced. Despite all my reading about co-morbid disorders with autism I had never heard of the disorder afflicting this population until a mitochondrial disorder doctor suggested it. Two weeks ago we guessed this was what he had after sending a flurry of emails and videos to a psychiatrist we have yet to meet. It was scary to choose, as both get harder and harder to eradicate as time goes on.

In the end we went with our gut. And I am sending a big request out to the universe that we are right.