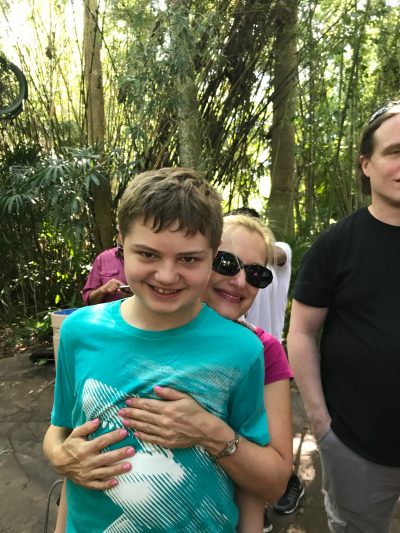 It’s now month five of watching Justin struggle with his “episodes,” and after ruling out seizures and tumors and mitochondrial disorder (oh my!) we’ve finally narrowed our options down to two different disorders. My husband and I are big second and third opinion people, so we’ve consulted several different practitioners, and of course, they conflict in their opinions of what he has.

God forbid there should be a blood test with anything associated with autism.

Of course both issues are treated completely differently, and in the end after reading and watching videos and consulting with doctors in different disciplines Jeff and I had to choose which one we think he has (what fun!), and have started treatment accordingly.


Because of course an ex-elementary school teacher and a higher ed consultant are experts in the field of autism-related disorders.

Over the years we’ve battled many conditions associated with Justin’s autism- OCD, insomnia, aversion to eating, aggression. The truth is with most of these I was able to keep hope alive we’d solve the issue (OCD however is a tenacious little bugger, he’ll have that for life), primarily because I saw many of my friends go through these problems, and after weeks and sometimes months they were resolved. We’ve always schlepped Justin to really good doctors because we’ve found middle-of-the-road practitioners to be a waste of time, and since I had faith in them, I had hope we’d resolve his problems too.

This time, I’m finding it harder to conjure up that hope.

Part of this is that I’m older now, have been doing this dance for almost fifteen years, and people, I’m tired. I laugh as I say this because I’ll be doing it for thirty or forty more and it’s a little early to let fatigue set in, but this is where I am. We’ve started him on a new medication and have witnessed what seems to be improvement, with less improvement at school but some progress none-the-less. His school is wonderful and collects data on his episodes daily, and for the past few days I’ve been a junkie, waiting eagerly for him to get off the bus so I can get my data fix.

The truth is with autism-related disorders it can sometimes take months or even longer to resolve the issue, and sometimes it can’t be resolved. There are numerous medications to try on the path we’ve chosen. If this doesn’t work and we address the other potential issue it will be months before we wean him off the medication that might be the culprit.

There are no quick fixes with autism.

But I’m going to shuffle out that hope, drag it kicking and screaming into the light, because frankly the alternative sucks. I will hold on to any period of time where he’s just himself, that loving, affectionate, smiling, huggy kid who just wants peace, juice, and some form of entertainment to keep him occupied. I have to conjure up that faith because I have a responsibility to him, to my other kid, and to myself to stay healthy and open to the possibility that he will, indeed, get better.

We will wait. We will watch. We will hope for resolution, because the ramifications of this for Justin’s future are huge.

And I will hold on to every time my boy smiles at me and embraces me with his true self.