Brick PD to Allow Residents to Turn In Unwanted Guns 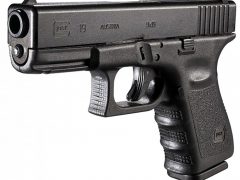 The Brick police department will host a gun turn-in event next month, but officials stressed it is not a “buy back” program like those occasionally offered in areas with concerns over gun crime.

The program will allow residents who are in possession of firearms they do not want to turn them in safely.

“Guns left lying around the home are a common source of tragedy,” the department said in a statement. “This Gun Turn-In event provides a way for citizens to dispose of unwanted firearms before a tragedy occurs.”


The event will be held Saturday, May 5 from 9 a.m. to 1 p.m. at the department’s headquarters at the municipal complex on Chambers Bridge Road. Those who bring weapons must also bring identification. Guns must be unloaded, and ammunition will not be accepted for disposal.

Guns brought to the event must be carried unloaded and contained in a closed and fastened case, gun-box, securely tied package, and locked in the trunk of one’s vehicle during transit to the event.

“A gun that is turned in can never be stolen in a burglary and used later in a violent crime, and it can never fall into the hands of a curious child and cause the death of that child, a friend, or some other innocent person,” the department’s statement said.

For additional information, residents can contact the department’s Identification Bureau at 732-262-1100.