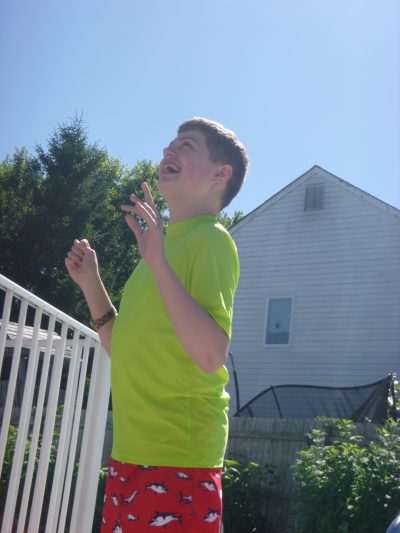 He hesitates at the threshold of the tub, looking concerned that the water is spraying down rather than collected for his bath at the bottom. He vocalizes loudly and frequently, and it’s difficult to tell if he’s excited or dismayed that he won’t be taking a bath this evening. I gently encourage him by putting pressure on the small of his back and telling him it’s alright to get in, and after a slight pause, he does.

We’ve tried this numerous times over the years to no avail, but finally, my fifteen-year-old autistic son is taking a shower.

This might not seem like such a momentous occasion, but it is. I’m always thinking about down the road for Justin, not only how we can facilitate some semblance of independence, but also how we can make his care simpler for the dozens of caretakers who will get him from adulthood to death. It takes a lot of patience to care for our boy, and anything I can do now which will make that task easier for others down the road is a priority for me.


One more skill down, just about a thousand left to go.

If someone had told me fifteen years ago when I held Justin for the first time in my arms that I’d be excited he finally learned to shower a decade-and-a-half later, I would have understandably been upset. The truth is Justin’s development diverged from “typical” as early as his first year, and every year after that I witnessed the gap widening. I will never forget being out to lunch with him just after his first birthday and having a stranger ask me if he was talking yet, and assuring me he would. I can recall a sinking sensation in the pit of my stomach, somehow knowing this well-meaning stranger would be wrong.

Score 1 for mom, zero for stranger.

At first I thought with intense therapy coupled with his innate intelligence we’d be able to move him toward the less severe end of the spectrum, and that was my focus his first few years. I didn’t believe we’d “cure” him, but thought we’d be able to give him some semblance of a more “typical” life than that experienced by individuals on the more severe end of the spectrum. After a few years it became obvious that Justin’s severity was not budging despite our interventions.

I admit, I mourned that prognosis more than I mourned his initial diagnosis.

His world got smaller. His achievements got smaller. I threw away my child development books and thought about what realistic goals I wanted for my son. Communication- an absolute necessity. Sleeping through the night- another necessity, and this one for his mother too. Eating more than carbs each day- a must. Quelling the aggression that popped up from sensory overload or frustration or both- crucial to his happiness and ours.

Slowly, I began to focus on what he could do, not what he was supposed to do.

Once I made that shift the world changed. The panic I’d felt about “catching him up” disappeared. I was able to revel more in each of his small accomplishments and not feel so defeated when a skill just couldn’t be acquired. It was easier to work with him all day, easier to be his mother as well as his therapist.

And that shift was crucial to our relationship too.

Over the years I have learned the importance of celebrating the small stuff, of being as excited that Justin learned to drink from an open cup at ten as when my other son’s school team came in fifth in the Math Olympiad. I’ve learned to listen to friends with teenagers talk about their children’s accomplishments without feeling deeply saddened, and instead learned to focus on all Justin has achieved, and how happy he is with his life.

I’ve learned to focus on giving him the best life possible on his terms, not mine.

And I never forget to celebrate the small stuff.