New Wawa With Gas Station Gets Unanimous Approval in Brick 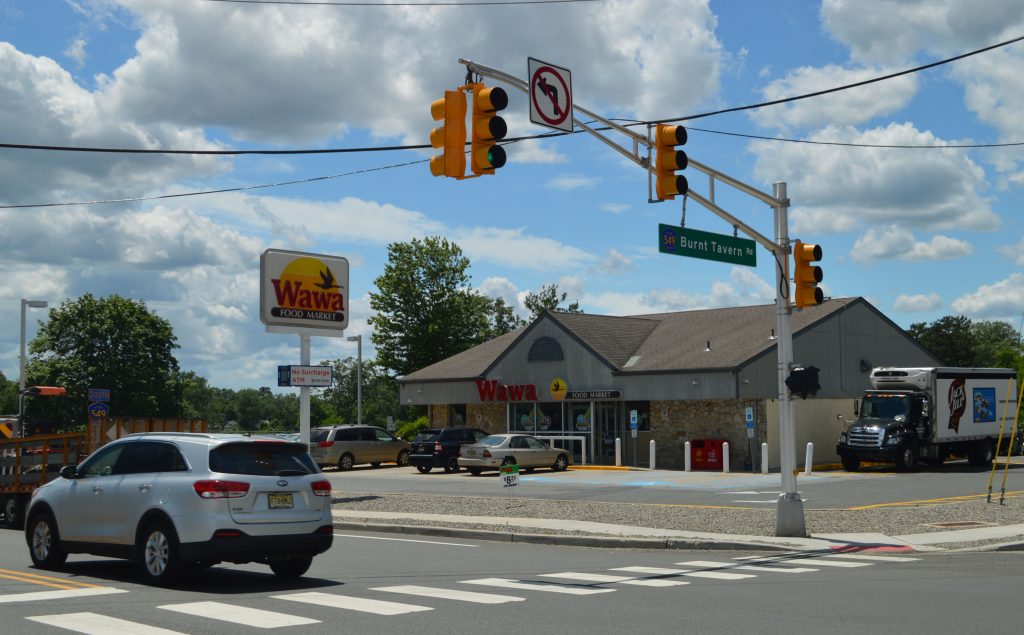 After nearly nine months of meetings, delayed by an extraordinarily busy zoning board as well as an objector whose intentions were the subject of some debate, Wawa was granted permission to construct a new retail store and gas station at the corner of Lanes Mill and Burnt Tavern roads.

The planned 4,736 square foot retail store and six fuel dispensers with 12 pumps will replace an existing Wawa store – one of the first locations of the chain in the area – and take up a plot of land that also once housed the popular Rice King Chinese restaurant and other businesses. Rice King and its neighbors left due to the construction of the full Garden State Parkway interchange 91, leading Wawa to purchase the remaining land and combine it with the lot housing the existing store in order to fit the expanded retail space and gas pumps.

There was a sole objector the project – Jalil Jallo, a Summit Avenue resident – who was rumored to be the owner of a competing Exxon gas station further down Lanes Mill Road at the Route 88 intersection in Lakewood. A witness identified Jallo as owning a gas station, however his attorney, Edward Liston, claimed he did not know why his client was objecting, besides the fact that he was a Brick resident.


Liston’s arguments against the approval of the Wawa focused mainly on two factor: the size of the lot and the fact that combined filling stations and convenience stores are not permitted uses in the B2 (Business) zone. The board, however, has recognized in the past that the township’s zoning code does not recognize such facilities in any zone, instead defining a gas station as an older-style, traditional service station with pumps and a mechanic’s garage. In recent years, the board has approved Wawa, Quick Chek and Royal Farms locations that include combined retail fresh food stores and filling stations.

Liston called the proposal a “gross overdevelopment of the site.”

“First of all, even as compared to other Wawas, as my expert planner indicated, most with this number of pumps and a convenience store are located on a property two acres or greater,” he said.

Liston was countered by attorney John Jackson, representing Wawa, who noted the board approved a new Shell station, convenience store and fast food restaurant across the street from the proposed Wawa on a smaller lot. Redevelopment of the Shell property has not yet begun.

Jackson also said the Wawa property, situated off a newly-expanded highway interchange, was “perfectly suited” for the type of use proposed.

“It is a perfect feature, suited for commuters as well as a tourism community like Bricktown,” said Jackson.

Some of the debates between attorneys for Wawa and Liston centered on traffic patterns. Jackson said Wawa’s plan would eliminate two driveways and create new 36-foot wide driveways on Lanes Mill and Herborn avenues that are safer than the existing ingress and egress points for the store.

“Our circulation and access on the ground is improved on all accounts,” Jackson said.

Though she was not a formal objector, the owner of a neighboring residential property voiced concern that a new Wawa could make her lot less attractive to potential buyers. Judith Gass said she owns two lots that she may market to developers, including gas station owners. Board Attorney John Miller, however, said board members could not legally take into account hypothetical scenarios that may or may not take place on properties not associated with the application.

The board approved the Wawa in a unanimous vote with no changes or added conditions to the company’s application.