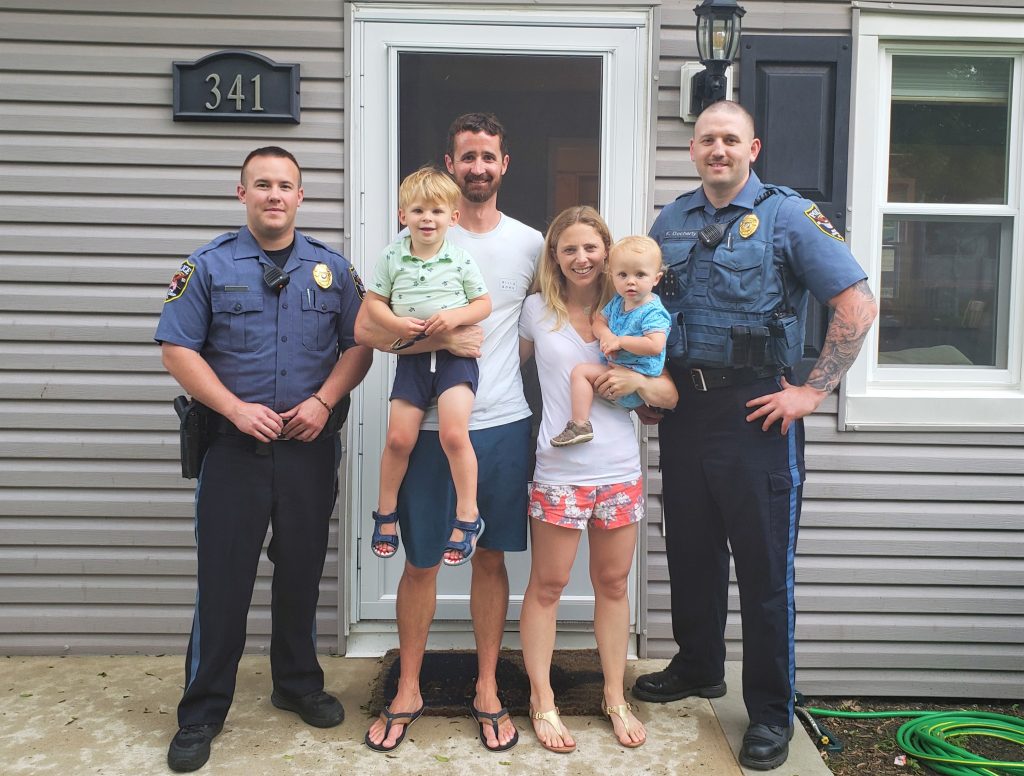 Brick police officers and the Travers family are reunited after their son was saved after choking. (Photo: Brick Twp. Police)

On the evening of June 9, a Sunday, Brick police officers heard the call they all dread – a 21-month old choking victim stopped breathing and was unconscious.

Fortunately, two crucial factors led to the rescue of little Bruce: the young toddler’s mother, Melissa Travers of 20th Avenue, is a nurse, and the rapid response of the officers who arrived quickly and helped revive the youngster.

According to Sgt. Jim Kelly, Melissa and her husband Ryan were giving their two children a bath when Bruce vomited and immediately began choking. Seeing his son struggle to breathe, Ryan began back blows, then Melissa took over while the parents dialed 911 and carried Bruce downstairs and out the front door to meet help as they arrived. While waiting, Bruce began to go limp and Melissa began CPR.


The first officers arrived in less than three minutes after the call came over the air. Officer Tyler Stephenson was the first to get to Bruce and immediately administered a series of stiff back blows that completely dislodged the obstruction. However, due to the amount of material Bruce had vomited, his airway was still obstructed. That’s when Officer Kevin Docherty began using his fingers to sweep the vomitus and regurgitated food out of Bruce’s mouth. Officers Stephenson and Docherty continued rescue efforts, falling back on their training until the arrival of the EMTs.

By the time the EMS squad arrived, Bruce was able to breathe, but his breath was shallow and he was lethargic. Officer Stephenson carried Bruce to the ambulance and turned him over to EMTs Ronald Sottilare and Lindsay Ferko.

Bruce spent a few days in the hospital to recover and be monitored. After a couple of days he was released with a clean bill of health.

This past Thursday, June 20, Stephenson and Docherty were reunited with the Travers family. During the visit the family and officers shared their accounts of what happened that day.

Melissa described it as, “the most frightening moment of our entire life,” to which Stephenson echoed, “Mine too.”

The family and officers shared hugs and celebrated a job well done by all.

“It’s comforting to know that you guys are always there for situations like this,” Ryan was heard saying over the din of their 3-year old Will showing off for the officers. “We’re just so grateful.”