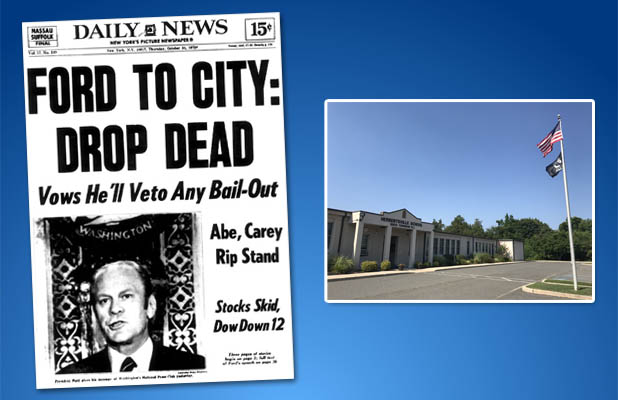 The famed Oct. 30, 1975 headline of the New York Daily News. Is it being repeated in Brick? (File Photos)

Brick will receive zero funding from the state following an emergency plea to restore money for the remainder of the 2019-20 school year, a result that was characterized as a “slap in the face” by officials in a neighboring district.

Next door to Brick, the Toms River Regional school district was offered $854,634 by the state, well short of its $4.5 million request. But Brick fared even worse, having its funding plea completely rejected by the state Department of Education. Brick had requested $2,741,894 in emergency aid following multi-million dollar cuts from the state in this year’s budget.

Neither Acting Superintendent Sean Cranston nor Business Administrator James Edwards responded to a request for comment on the matter. In a letter sent to the Brick district in response to the request, obtained by Shorebeat, the Department of Education stated that it was denied because the district had already been able to balance its budget for the year. The school board, however, had to eliminate 62 positions and 48 employees in order to achieve that balance and class sizes are reportedly higher this year as a result.


Meanwhile, Brick has five additional years of multi-million dollar cuts on the way, pursuant to an agreement between between state Senate President Steve Sweeney (D-Gloucester) and Gov. Phil Murphy under which Brick schools will receive a permanent $22 million per-year cut to its funding. Under the same measure, which has come to be known as its formal Senate bill title “S-2,” taxpayers are forced by law to absorb property tax increases aimed at closing the gap, but even the maximum tax increases allowed by law would be insufficient to fill the gulf, Edwards has said in the past. In recent weeks, Trenton has been considering allowing districts that have their school funding slashed to “fix” the crisis by allowing them to raise local property taxes beyond the state’s 2 percent cap – an option that has raised the ire of local officials even higher.

Members of the Brick school board have not said whether or not they would choose to raise taxes beyond the state’s 2 percent cap if they were allowed to do so. The bill being considered would allow tax increases to be passed without voter approval in certain districts, including Brick.

Toms River school officials are planning a march on Trenton Tuesday. The district there issued a scathing statement on the emergency aid issue.

“The state’s letter is an offensive response to our plea, which itself is the result of an ill-advised bill that is based on a secret formula that includes $6.5 billion in taxpayer money, all of which has been cultivated by an agency whose sole responsibility is to protect the educational well being of ALL children,” the TRRS statement said.

The “secret” formula refers to the fact that the state has denied local school districts’ requests to actually view the formula that led to funding cuts. Trenton has denied those requests with the explanation that the formula is “proprietary.” The matter is now heading to court, while local legislators have penned a bill forcing the state to release the formula. The bill, sponsored by Ocean County’s Republican legislators, has not yet been considered for a vote in the Democrat-controlled Assembly or Senate.

Brick is participating in a lawsuit to overturn S-2 and reallocate school funding across the state.