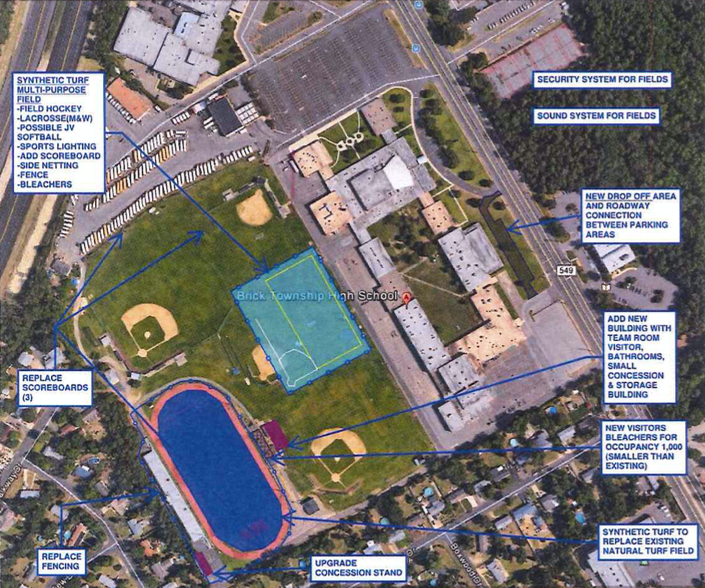 As Brick school officials debate as a committee as to whether or not the district should ask taxpayers to fund plans for upgrades and technology projects across the town’s schools, the architectural firm it has retained to conduct pre-referendum work has identified $71.1 million worth of work.

The board did not disclose the scope of a potential referendum at its most recent meeting. Board members could propose portions of the recommendations created by the firm, Netta Architects, all of them or none at all. The full suite of potential capital projects was obtained by Shorebeat through a request under the state’s Open Public Records Act. Shorebeat acquired proposals by Netta as well as The Musial Group, which also prepared a draft referendum plan, however the board allocated $25,000 to Netta to complete the work earlier this month should they determine to ultimately move forward with a referendum.

A $12.5 million referendum held last year that focused only on security upgrades was rejected by voters. The latest proposal incorporates projects that may be funded through a new ballot measure or an energy savings plan under which new equipment and some renovations are financed through the savings they generate by improving efficiency.


The 30-page document produced by Netta, attached below this article, presents a multitude of items that add up to $71,162,591, including estimated construction costs. Security expenditures in the proposal represent about the same as the 2019 proposal, which was defeated by a margin of just 39 votes.

By far, the largest recipient of funding for projects would be Brick Township High School, where the proposal includes $1.4 million for a turf football field and $2.7 million for turf and amenities on a new multipurpose field. Another expenditure at the school would be $1.3 million for a new building behind stadium bleachers that would include restrooms, a concession stand, storage and “team rooms.”

For BTHS, the largest of all the expenditure proposals includes $5.85 million to fund a new gymnasium on the west end of the building with a new entrance and $2.45 million to renovations on the existing west gymnasium. Nearly all of the facilities improvements listed at BTHS are sports related.

Likewise, the $14.1 million in proposed projects at Brick Memorial High School cover sports facilities as well, mirroring the BTHS list. There would be new turf on the football field as well as a $5.3 million new turf multipurpose field. Another $2.2 million would go toward a two-story addition that would house music rooms and classrooms adjacent to the auditorium corridor.

At Lake Riviera Middle School, $2.87 million would go toward turf fields while the next-largest expenditure, at $1.9 million, would provide air conditioning in second-floor classrooms. There would also be parking lot improvements and new lighting for athletic fields. An alternative proposal, which would cost $7 million, would provide air conditioning to the entire school.

Across town at Veterans Memorial Middle School, the proposal includes an $885,000 replacement of an existing turf field and $365,000 for 1,500 new bleachers.

The elementary school projects mainly focus on security, inclusive of several plans to renovate the interiors of buildings in order to create “man traps,” also known as air locks, to prevent intruders from being able to gain access.

The Musial Group, the firm which was not chosen to design a potential referendum, proposed a smaller package of projects that adds up to $32 million.

The board has not yet decided whether to consider a referendum as it attempts to deal with a $23 million state funding cut to the district’s operating budget over seven years. The $71 million worth of projects – which could be pared down to any figure board members choose – would be funded through bonding within the district’s capital budget, which is separate from its operating budget that is used to pay staff and handle everyday expenses.

Netta’s proposal was submitted to the district Dec. 9, 2019, however Board President Stephanie Wohlrab said board members had not yet reviewed the documents.

“We have not seen it, we have just talked about possible things,” she said at the Jan. 16, 2020 board meeting. “We are getting a committee together.”

That committee will be tasked with going through the list of projects, deciding if a referendum should be held at all, then determining its scope if necessary. Wohlrab said “everything is on the table” when asked about a potential referendum by a resident.

“There are a lot of things going on and this may, or may not, be a piece of that,” she said.