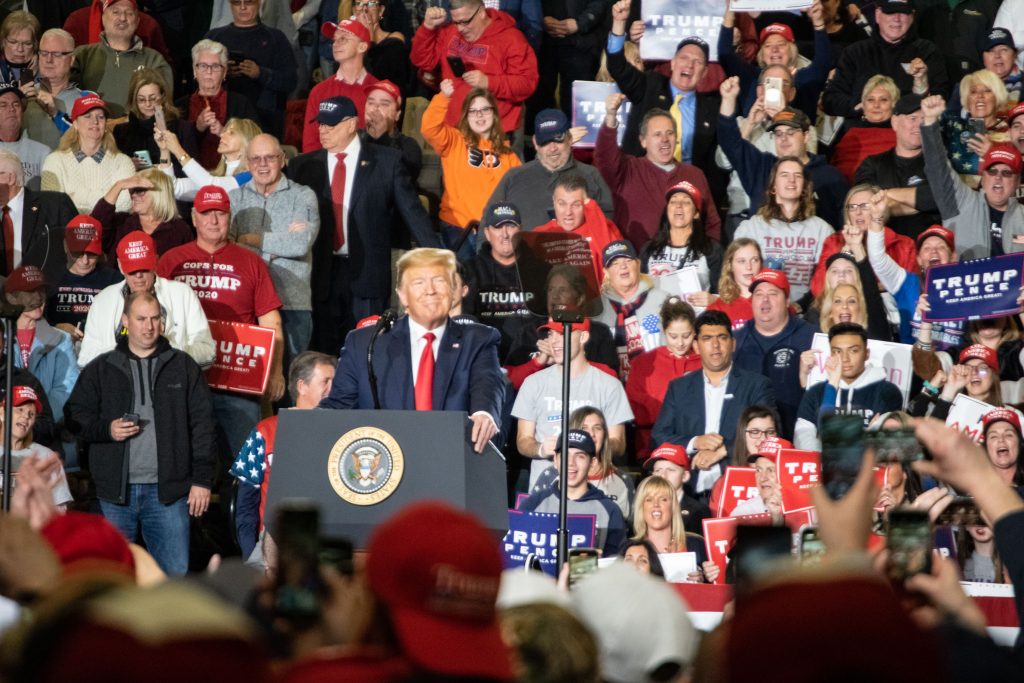 President Donald Trump spoke to one of his smallest rally crowds ever on Tuesday in Wildwood, but ironically it now holds the title of being the most popular rally ever in terms of demand for tickets.

Only the space of the room at the Wildwoods Convention Center limited the crowd. Campaign officials said over 175,000 tickets – a new record – were requested, but the building’s size limited the number of spectators to about 7,500. The more intimate space, and its amplification of cheers and jeers, also proved to be a good measure of which issues roused the most interest of those who attended. Without a doubt, Trump’s comments of New Jersey “sanctuary state” policies toward illegal immigration and his pledge to maintain the right to bear arms were the topics that drew the most excited responses. 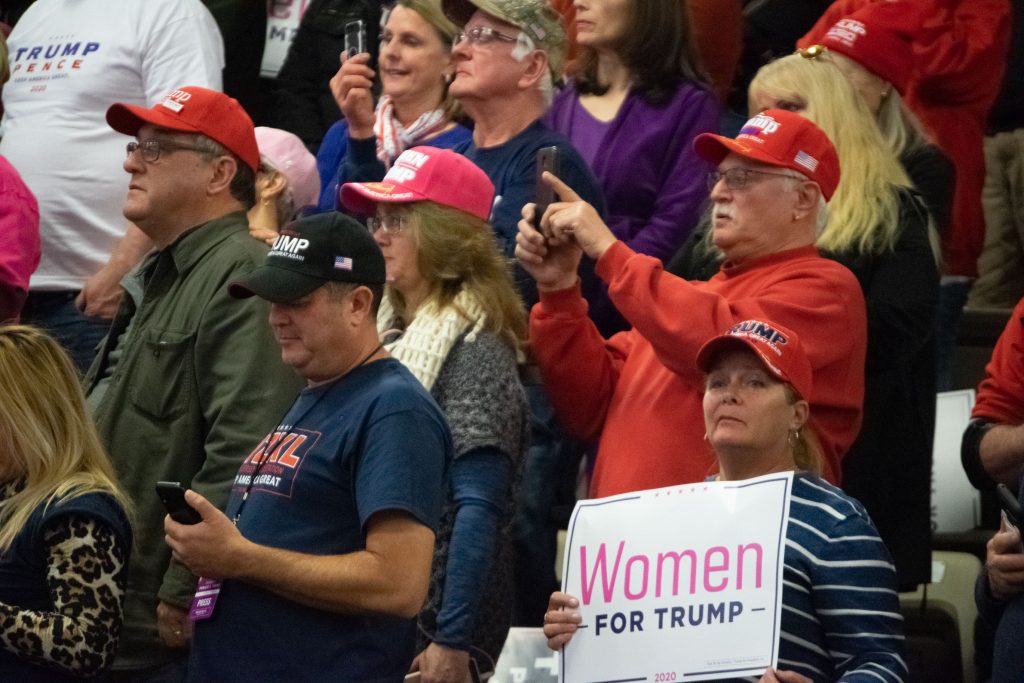 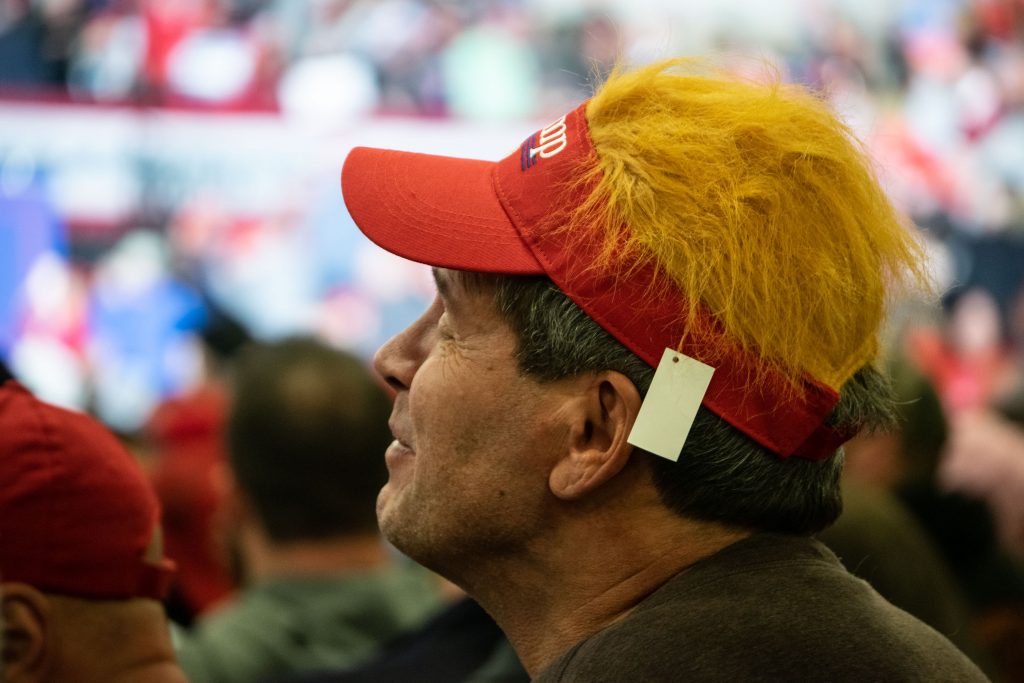 “Right here in New Jersey, your state’s Democrat leaders have instituted sanctuary policies that allow dangerous predators into your neighborhoods,” Trump said, referencing the case of an accused child rapist who was set free from the Cumberland County Jail despite the presence of a federal ICE detainer, and an illegal immigrant who was let out of the Middlesex County Jail and went on to commit three murders.

Gov. Phil Murphy, along with Attorney General Gurbir Grewal, instituted the controversial Immigrant Trust Directive last year which precludes law enforcement from cooperating with ICE in most circumstances. The issue is now the subject of lawsuits filed by Ocean and Cape May counties. The Democratic administration says the directive helps immigrant communities by removing the fear of interacting with police, however the high-profile cases Trump referenced have prompted staunch opposition by Republicans across the state.

“No American should ever be hurt because left wing politicians – Democrats – give sanctuary to criminal aliens,” said Trump, to thunderous cheers from those attending the rally.

“Our second amendment is under siege,” said Trump. “It’s never going to happen as long as I’m president of the United States.”

That comment drew the loudest response of the night. Many rally attendees wore shirts with themes focusing on second amendment rights and some wore National Rifle Association hats and shirts. 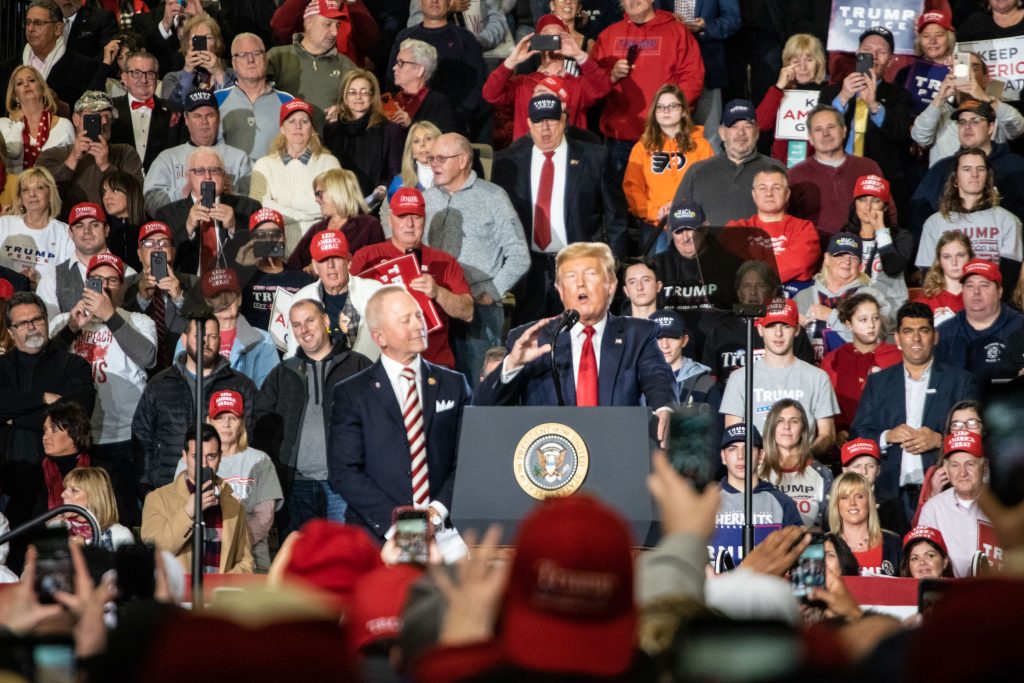 Trump also touched on bread-and-butter issues where there may be some signs of bipartisanship in a deeply divided America. Trump took the opportunity to announce his plans to reach an agreement with Canada over the import of pharmaceuticals at much lower prices than those Americans are currently paying. He said he is “creating a pathway” between the two countries where medications can be brought into the United States in low-cost generic forms.

The president made sure to give a specific nod to New Jersey’s southern half. The underlying purpose of the rally was to drum up support for U.S. Rep. Jeff Van Drew (R-2), who switched parties recently over the issue of Trump’s impeachment. The GOP leadership in several counties has since endorsed Van Drew, who has long been a conservative Democrat who was enjoyed strong popularity in a Republican-leaning district as both a state legislator and congressman. 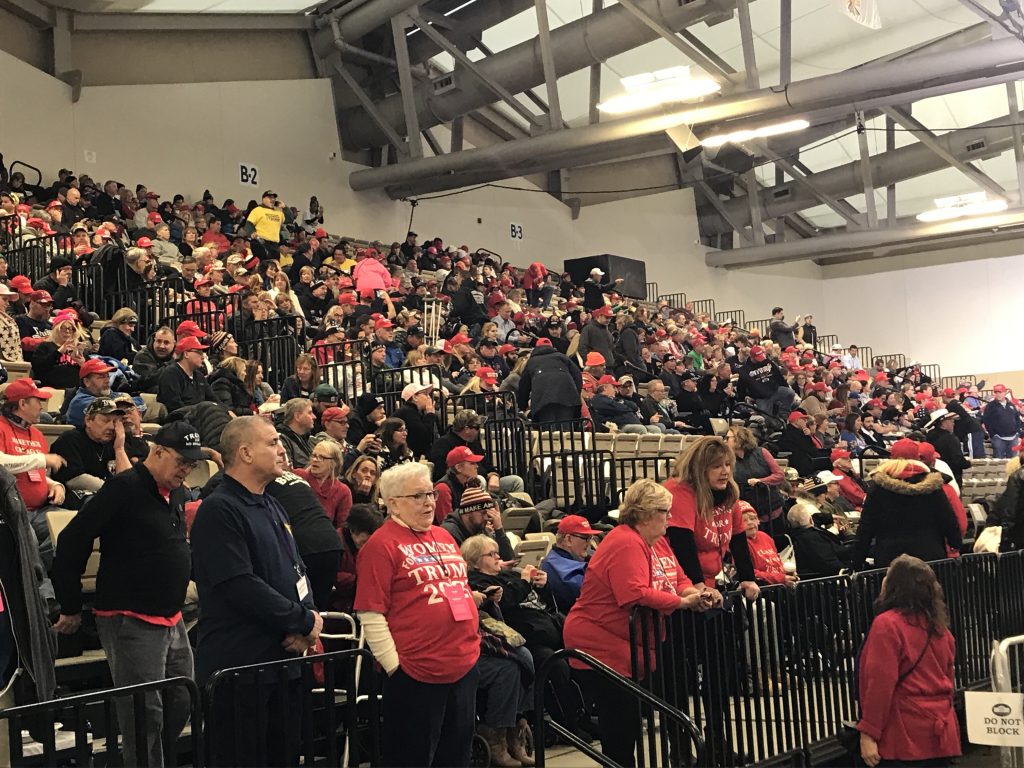 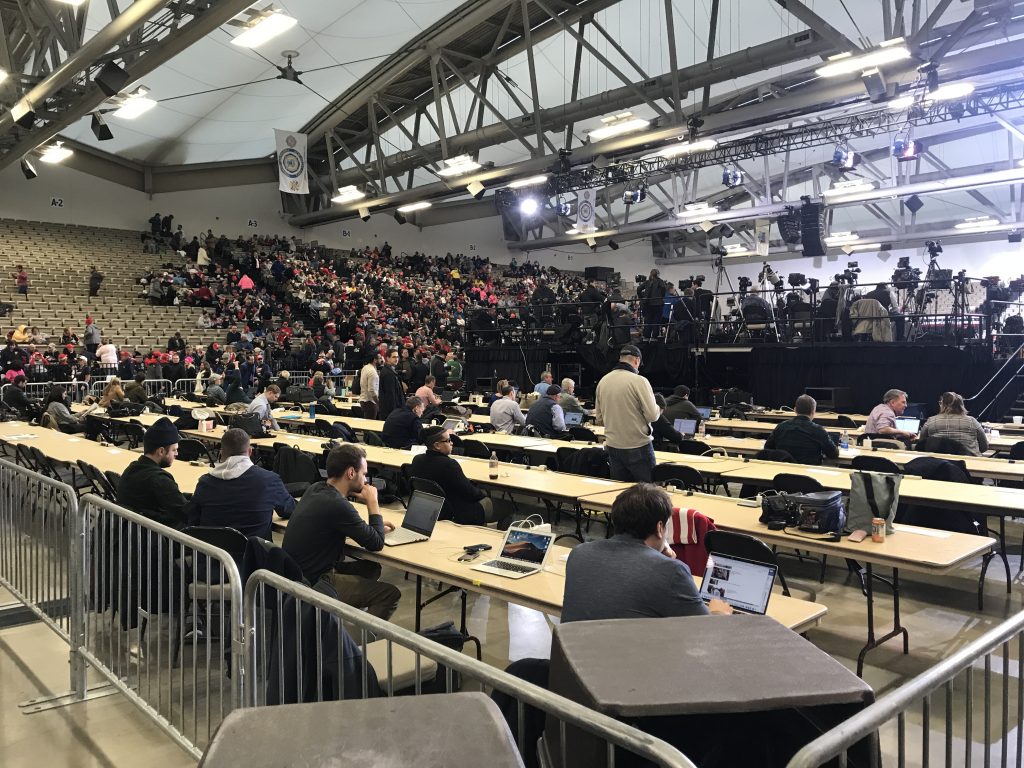 A media section cordoned off at the Jan. 28, 2020 rally for President Donald Trump. (Photo: Daniel Nee/Shorebeat)

On Tuesday night’s rally, Trump said: “They asked, ‘should we move this to the Meadowlands?’ and I said, ‘No, I want to keep it in South Jersey.’ Maybe we’ll do it [the Meadowlands] in the summer.”

Kellyanne Conway, a Trump aide who hails from Hammonton, spoke briefly at the rally.

“Mr. President, I think South Jersey is Trump country,” to loud cheers from the audience.

“The eyes of the world are on South Jersey,” Van Drew said, thanking Trump for keeping a promise to support him after switching parties. 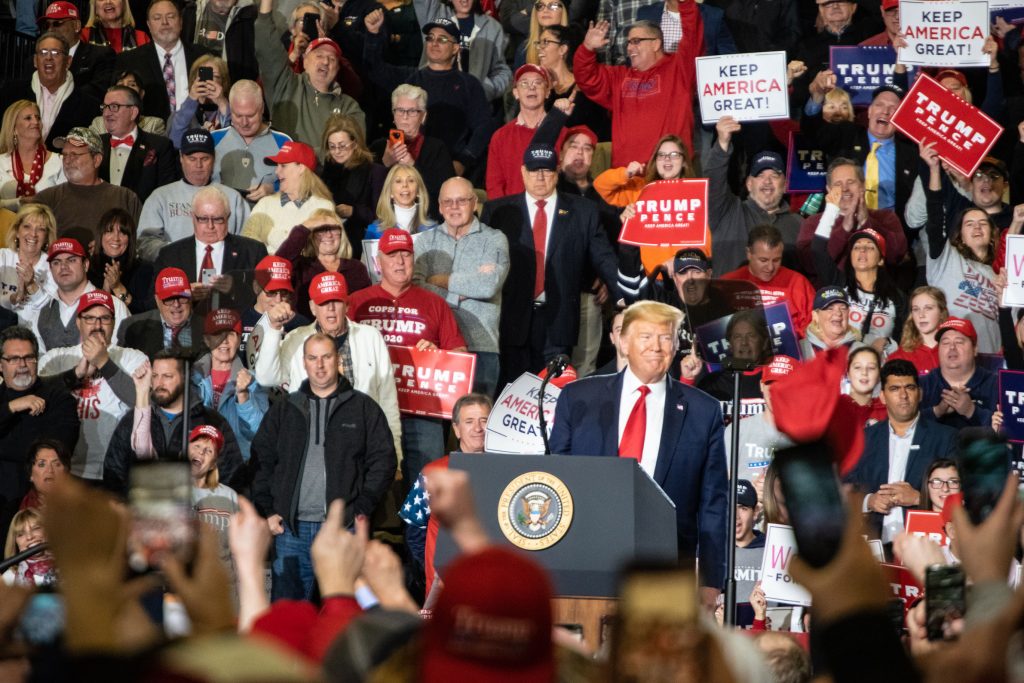 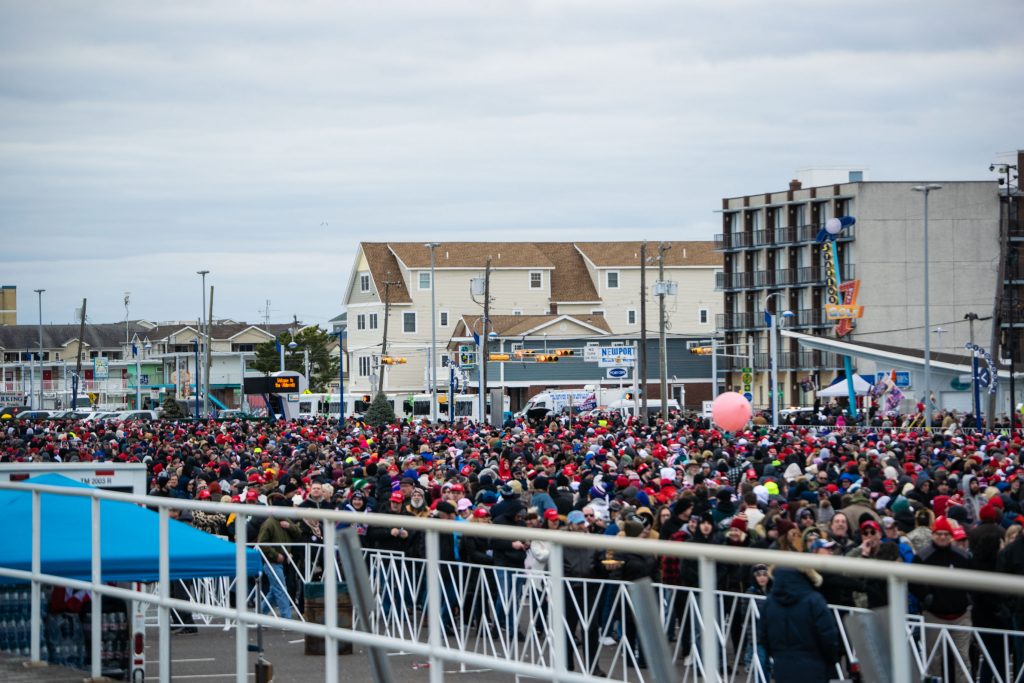 Though normally thought of as a deep blue, politically liberal state, Tuesday’s event was also meant to breathe life into a state Republican party that will seek to reclaim four congressional seats lost in 2018 (one of which is Van Drew’s which would need to be retained), a gubernatorial race in an effort to oust Murphy and seek legislative majorities that would seek to reduce the state’s property tax burden – all over the next few years.

Trump ended the rally in his traditional way – a number of slogans leading up to “Make America Great Again,” his signature tag line – but also had complimentary words about a state he did not win in 2016 and is not expected to win in 2020.