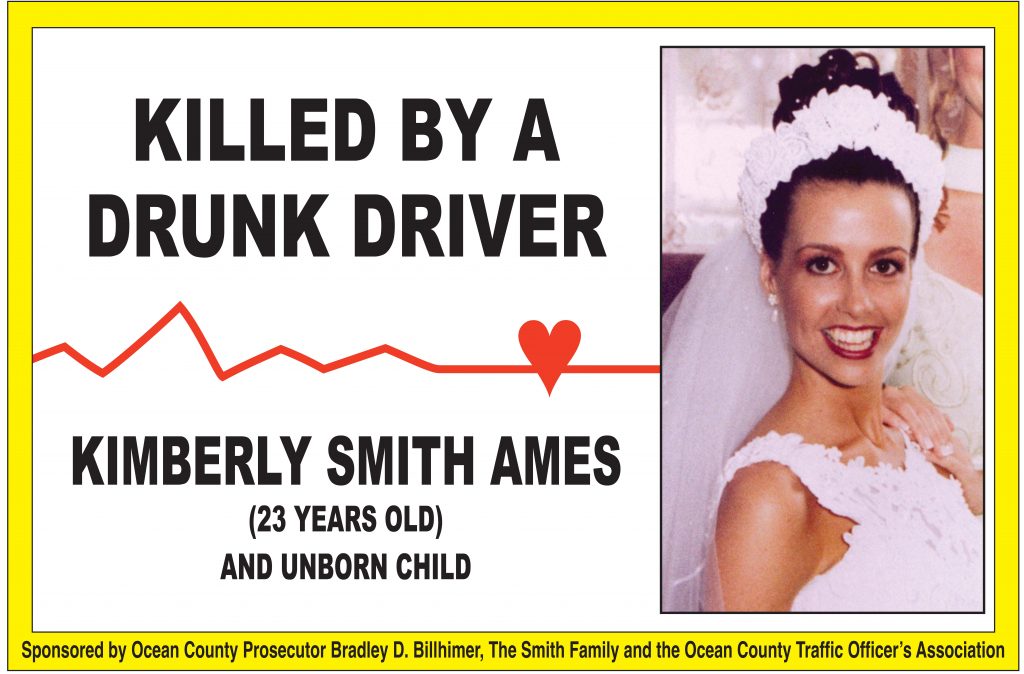 Ocean County residents who came of age in the late 1990s and early 2000s will recognize the sign immediately.

It features a photo of Kimberly Smith Ames, who would have been celebrating her 45th birthday this week. Her daughter would have been 21-year-old. But photos are all that remain following a fatal drunk-driving crash that took the life of the Beachwood newlywed who was expecting her first child.

“Growing up in Ocean County, I was friends with Kimberly’s older brother and sister,” said Prosecutor Bradley Billhimer. “I remember vividly the pain and sorrow her family went through dealing with the loss of Kimberly and her unborn baby.  To this day the family is still grieving.”


Billhimer said her recently reconnected with the family and gained their support in re-launching the campaign of billboards and roadside signs that quickly tell the story of her their loved one’s life came to a tragic end. Those who drove Ocean County’s roads in the years just after the fatal crash will undoubtedly recall the design, which remains largely unchanged from the original.

Kimberly Smith Ames was 23 year-old and three months pregnant with her and her husband’s first child, when she was killed by a drunk driver on Oct. 7, 1998 in her hometown of Beachwood. In the aftermath of her tragic death, her photo became part a state-wide DWI awareness campaign featuring billboards and signs posted in local stores. Billhimer said he wants to tell Kimberly’s story to a new generation.

“I hope that people will see Kimberly’s face and think twice about getting behind the wheel when they are impaired,” Billhimer said. “Educating new drivers and the general public about the dangers of impaired driving is always a priority. Enforcement is a priority as well, and my office will continue to work with our local law enforcement partners to focus on targeted enforcement to prevent impaired driving.”