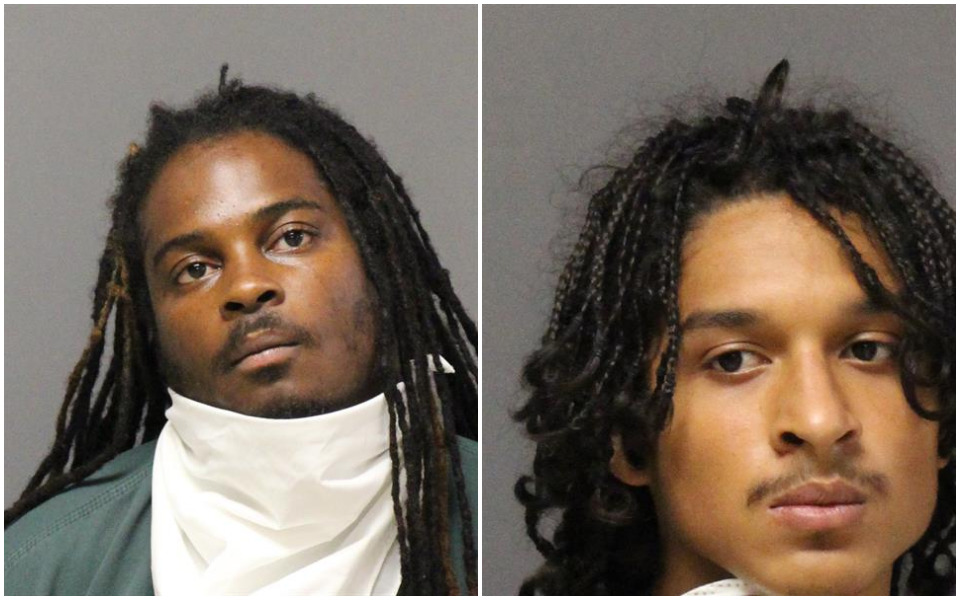 Two vehicles parked suspiciously in a Brick parking lot late at night led officers to investigate – and it paid off.

Late Friday night at approximately 11:30 p.m., Officer Scott Mesmer noticed two vehicles parked in a dark area in the parking lot of the AutoZone store in front of Brick Plaza. The vehicles were “parked in such a way that it appeared the occupants were talking to each other,” said Sgt. Jim Kelly.

As he pulled into the parking lot to get a closer look one of the vehicles, a Jeep Cherokee, quickly pulled out of the parking lot, exiting through the entrance, and headed north on Chambers Bridge Road. Mesmer observed that the Cherokee had a headlight and a tail light out, so he stopped the Cherokee, which pulled into the 7-Eleven store on Chambers Bridge.


The occupants of the vehicle, identified as Romario Sharrier, 25, of Newark, and Oscar Euceda, 18, of Atlantic City, did not give Mesmer consistent answers when he asked them about their involvement with the other vehicle they were talking to in the parking lot of the AutoZone, Kelly said.

When Officer Joe Lardieri arrived at the scene of the stop to assist Mesmer, Lardieri observed drugs inside the vehicle, said Kelly. With the aid of the Brick Police Street Crimes Unit, additional drugs and contraband were discovered including several glass smoking pipes with crack residue, empty wax folds used to store heroin, approximately 100 pills suspected to be ecstasy and a BB gun pistol, according to police. In addition to the contraband, several plastic gloves were found in the vehicle.

At the same time, Officers Eric Haugh and John Alexander went to the Auto Zone parking lot while Mesmer and Lardieri had the Cherokee stopped. Haugh and Alexander found the other vehicle, a BMW SUV, unoccupied, but running. A check of the license plate revealed that the vehicle was stolen, Kelly said.