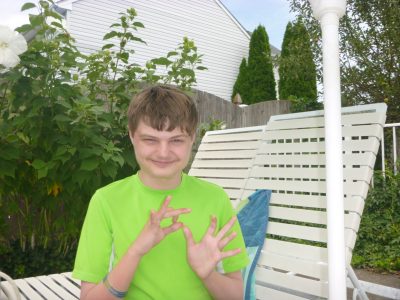 I realized today while taking my morning walk that I missed my ten year “blogiversary” in March. In my defense we had just entered a global pandemic, so I can forgive myself.

But a milestone like that deserves to be celebrated, so here we go.

I went back and read a few of my early missives, feeling a great tenderness for that girl who had no idea what was coming down the road, but who was a bit seasoned in the autism chronicles as she was raising a seven-year-old and a three-year-old who both had it. I wrote a lot about writing my book (which I’m glad I did ten years ago as I’d never have the energy now), a lot about sleep deprivation (which I still have on occasion but it’s my fault entirely now, and not due to my kids), and an awful lot about acceptance and trying to keep a positive attitude when dealing with the struggles and challenges of raising an autistic kid.

And of the three, I’m still writing about the latter today.

My feelings about autism acceptance have shifted in shape over the years. I’ve read countless blogs from neurodiversity advocates and self-advocates, from parents striving to eradicate most or all signs of autism in their children to relieve their suffering, and everything in between. And the truth is, after seventeen years of living with autism 24/7, I cannot be put entirely into either camp.

Or rather, I refuse to settle down into any one camp.

I have two boys with autism, and they could not be more different, nor could their life trajectories. My youngest has regressive autism, where he developed typically for eighteen months then descended into a hell of losing all his speech and the very light from his eyes. After years of therapy my last son is now fully mainstreamed, has friends, and is taking Algebra 1 in the eighth grade, which mystifies his extremely math-challenged mother. He, like most boys his age, spends a lot of time in his room texting his friends, and is really, really grumpy sometimes when he wakes up.

I know, welcome to the teen-age years Kimberlee.

Despite trying really hard all these years I still to my chagrin can’t predict the future, but I am pretty certain my youngest will attend college, hold a job, have friends and love, and eventually move out. It doesn’t matter to me what university he attends or how lucrative his job is (as long as he can support himself) if he’s happy, safe, and productive. Trust me, I will feel like we won the lottery if he achieves all these things, because the statistics aren’t great, but still I feel he has a fighting chance.

And if he does, it will feel like we won the Megamillions.

My firstborn has had much more of a rocky road. I believe there were signs from him from the get-go, things like his constant aversion to sleep, his difficulty nursing and eating in general, and an all-pervasive crankiness no matter what I did. These things coupled with his penchant for spinning things at six months and his speech delay earned him an autism diagnosis at seventeen months, which was incredibly early back in 2004. Despite constant and quality therapy from seventeen months on, as well as my son has done, he will never live independently, will require life-time care that I’m wondering how I’ll coordinate from beyond the grave (because if I can pull it off, I will). My boy also has OCD, tic disorder, and intellectual disability, all of which have created a myriad of challenges for him and his family over the years. I am thrilled to say he is a mostly happy young man, but one who will need constant support over the decades to come.

And that is the crux of my issue with acceptance right there, because I won’t always be here to give it to him.

Don’t get me wrong. I completely accept that both my boys have autism. The fact that they’re different is not what I take issue with. We’re all different from one another, and that’s what makes a better and far more interesting world.

But I won’t be shoved into either the neurodiversity camp or the “cure camp,” because I have two boys with completely different needs and different projected life outcomes. My oldest can’t protect himself from predators; he literally can’t say the word “no,” nor might know that what someone is trying to do to him is wrong. And that is the bottom line for me, his inability to protect himself for decades to come, that prohibits me from embracing every aspect of his severe autism.

I know my feelings about this will never change no matter how many blog posts I read.

I feel completely differently about my secondborn. His autism presented challenges for him the last thirteen years, but frankly every kid has some challenges, and I firmly believe that some struggle is good for the soul. He has friends, love, is thriving in school and all his activities, and can most likely remain safe in this crazy world. I love his perspective on life- I wouldn’t change a thing.

So here’s what I accept. I accept that difference is beautiful. I accept that my goals for my children will remain obtaining their safety, their happiness, and their independence. I accept that I would change whatever I could to give them those gifts, even if it meant lowering their level of autism, which I believe would have no impact whatsoever on the core of who they are, because that core is love, not autism.

And I accept that I can both love them for who they are, and forever wish their struggles were lessened.