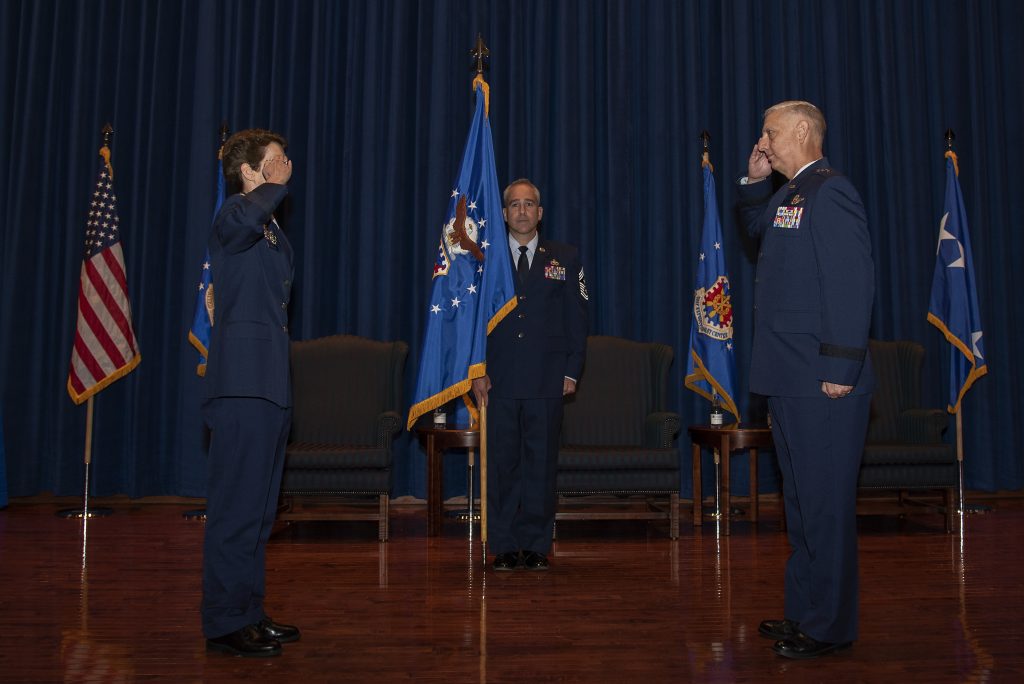 A new leader has been appointed to command the U.S. Air Force Expeditionary Center located at Joint Base McGuire-Dix-Lakehurst. The center is tasked with developing the USAF’s Rapid Global Mobility and expeditionary Agile Combat Support training and education, while also providing direct oversight for the Global Air Mobility Support System and installation support, contingency response, and building partnership capacity mission sets within the global mobility enterprise.

“Gen. Camerer is all about developing Airmen and building the force that will compete, deter, and win today, and tomorrow — he is absolutely the right person to lead the Expeditionary Center into the future,” said Air Mobility Command commander Gen. Jacqueline D. Van Ovost, who presided over the ceremony. “I have absolute faith and confidence he is the perfect leader to build upon [Maj. Gen. John Gordy’s] foundation and accelerate this command into the future.”


Camerer’s nearly 30-year career has included various positions at the squadron, group, wing, major command and combatant command levels. Prior to his current command, he was the Director of Strategic Plans, Requirements and Programs, Headquarters Air Mobility Command, Scott Air Force Base, Illinois.

During a ceremony last Wednesday, Camerer addressed the nearly 14,000 airmen of the Expeditionary Center and spoke of his commitment to the men, women, and families of the base.

“‘I assume command..’ They are more than three ceremonial words, they represent the commitment to the men, women and families of the Expeditionary Center that I make today,” Camerer said. “They instantly and profoundly link Julie and me to an awesome military organization.”

The center represents a major aspect of the base’s mission, now tasked with building key relationships with the Army, the Navy, Marine Corps. and the Space Force, as well as international partners. The goal, simply put, is to allow the U.S. military to rapidly move anything to any destination on the planet, Camerer said.

Airmen of the Expeditionary Center “provide our nation with the strategic advantage that is coveted by our senior leaders, respected by our allies, and cannot be matched by our adversaries.”

The Joint Base will eventually host the Air Force’s new KC-46 Pegasus tankers, which have been laden with unresolved issues that prevent them from being deployed except in a national emergency. The platform, based on the civilian Boeing 767 airliner, is due to replace aging tankers, including the base’s KC-10 and KC-135 models that are decades old. Becoming home to the KC-46 platform, while delayed, ensures the base is likely to continue to remain open for years to come. Van Ovost recently met directly with Boeing executives two weeks ago to discuss the ongoing issues, most notably fuel leaks and foreign objects being found inside newly-delivered aircraft hulls. The KC-46 will form the backbone of America’s air-to-air refueling mission in the future, and will be able to tackle missions involving the boom fuel delivery system found on U.S. Air Force jets as well as the probe-and-drogue systems utilized by U.S. Navy jets as well as those in most foreign allied air arms.

The KC-46 was chosen over the Northrop-Grumman KC-45, a proposed American variant of the Airbus A330 MRTT.

Once the kinks are worked out, the center’s new commander will be responsible for helping the plane and those who operate them accomplish what is normally referred to as a “no fail” mission.

“I am humbled to join this amazing team,” said Camerer. “I understand the responsibility that I am shouldering and I know the strategic importance of the Expeditionary Center, together we will continue to put the rapid in rapid global mobility as we deliver air power – from the ground up!”