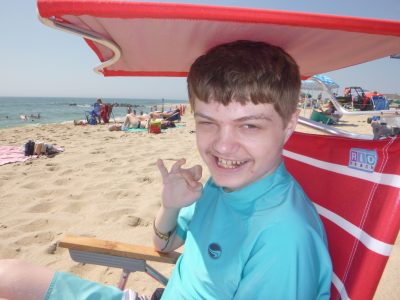 Although it’s been seventeen years since my family began their autism journey, I remember the sense of both relief and panic that assailed me after my eldest son’s diagnosis. There was so much to accomplish. Finding and training therapists because Virginia’s Early Intervention system was a joke for autistic kids; teaching him how to eat; how to sleep; and at the time, our hope we would be able to elicit functional speech. I was so overwhelmed in those early days and months, but I recall that one of his therapists said something to me that stuck even in those sleep-deprived days.

Don’t forget to teach him how to have fun.

I know it sounds ridiculous to have to teach a child to enjoy himself, but with Justin, we did. He could spend hours amusing himself by spinning objects, and he loved his Baby Einstein videos, but that was about all that enticed my son from a pervasive crankiness I was desperate to alleviate. When he was little Justin hated the car (we later had respite from this when we could turn his car seat around), so most of our outings were relegated to the stroller and neighborhood walks. I knew that I would have to encourage Justin to like leaving the house and doing things, both for my sanity, and for his future.


Even then I knew if he ended up living in a group home one day, he’d have to leave it eventually.

Slowly, I taught my son to tolerate the mall by taking longer and longer trips there- eventually, especially after we were able to turn around his car seat, he began to get excited when I put him in the car. We conquered the sounds of the parking lot, elevators (that took a while), and the general noisiness of the mall itself. Later, when we moved to New Jersey, we began taking outings to our local boardwalks, Great Adventure, our pool, and the beach. At all of these venues we had to build up both longevity and tolerance. In the beginning I sometimes bore the marks of his discontent with waiting on line, but in the end it was worth it.

Trust me, it would have been so easy to give up. All of this acclimation took years. Sometimes, it felt hopeless.

But it wasn’t. And now, at seventeen, there are a multitude of places we can take him, including Disney and Universal Studios. And I am convinced he would never have been able to tolerate the plane ride or the parks if we hadn’t accustomed him to venues when he was very young.

Leisure skills inside the home are important too. We are fortunate in that Justin enjoys the computer, his DVDs, and even will occasionally watch a feature movie on tv. We tried many activities over the years; many did not stick. The important thing however is that we tried, so we could cross some things off the list with at least knowing we’d given them a shot.

If you’re just receiving a diagnosis for your child fun is probably the last thing on your mind- there are more immediate needs to attend to. One outlook however that has served me well over the years when I’m confronted with an issue with Justin is to ask myself if this will be a problem for his caregivers when his dad and I are gone. If it’s not, I can drop it. If it is, I do my best to come up with a solution.

The truth is, Justin will reside with caregivers for going on forty years of his life. They will want to leave their group home on occasion; by exposing Justin consistently and repeatedly to experiences outside the home he came to love outings, which will help him later on.

Yes, I’m a planner. But whether I want it to or not that future where I’m not there for him will one day come- my plan is to leave him as happy and accommodating to other people’s plans as humanly possible.

Leisure skills are key. When the dust has settled and more pressing concerns are addressed, give an outing a shot, even if it only lasts five minutes. Try to find that one thing your child is passionate about that can be a sustaining  interest for his lifetime.

And never give up.