The state’s newest artificial reef, the Manasquan Inlet Reef, has received an expansion over the last several weeks…

The state’s newest artificial reef, the Manasquan Inlet Reef, has received an expansion over the last several weeks.

The reef is one of several in New Jersey that is open only to recreational anglers and divers, and is located about two miles off the coast of Point Pleasant Beach, just southeast of the Manasquan Inlet. (Coordinates appear at the end of this story.) The reef has been significantly expanded in recent weeks through a deployment of 6,000 tons of concrete on the reef site, the New Jersey Department of Environmental Protection announced Monday.

Material for the first deployment on Oct. 28 consisted of 74 concrete forms, measuring 40-by-8-feet-by-1.5 feet each, donated by Maher Terminals in Elizabeth, Union County. Another 77 forms were deployed Nov. 10. The forms, once used by U.S. Customs to scan shipping containers, were no longer needed and were slated to be recycled.


“This beneficial collaboration gives new life to these materials, keeping it out of landfills and providing habitat for a wide array of marine life, including species important to New Jersey’s world class commercial and recreational fishing sectors,” said Department of Environmental Protection Commissioner Catherine R. McCabe. “We are proud to partner with Maher Terminals to enhance the marine ecosystem of our coastal waters.”

Artificial reefs are typically made up of concrete, steel, decommissioned ships and barges and provide a habitat for a variety of marine life. DEP studies have shown that these materials are colonized quickly with organisms such as algae, barnacles, mussels, sea stars, crabs, sponges and corals. Shorebeat has previous covered a deployment to the Manasquan Inlet reef.

The structure of the reef, and the feeding opportunities provided by the animals growing on the reef, will attract species such as black sea bass, tautog and lobster, and “provide excellent opportunities for recreational anglers and divers,” the state’s announcement said. 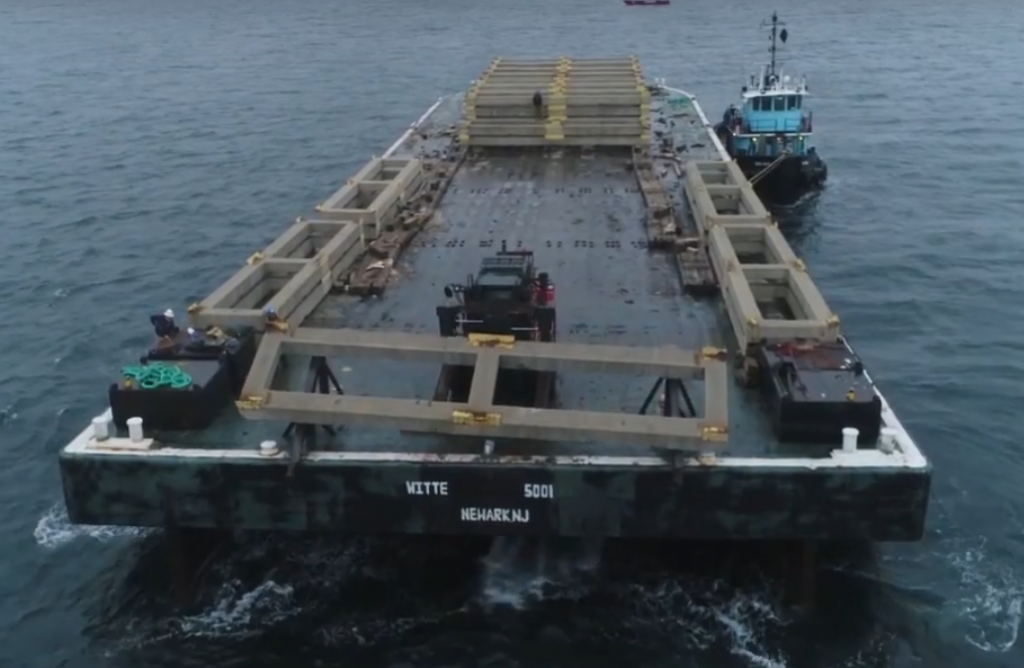 The reef footprint encompasses 0.84 square miles, but only two deployments had been made prior to last week. The new material adds nearly 1.25 acres of artificial reef habitat on what was formerly featureless sand bottom.

The Manasquan Inlet reef is approximately two miles east of the inlet and is one of the newest reefs in the artificial reef system – the product of an agreement the state made with recreational anglers to provide a reef that is off-limits to commercial vessels. Center point coordinates are 40° 04.617’ N and 073° 59.040’ W.

New Jersey’s reef program as a whole encompasses about 25 square miles of ocean floor between several marked sites from Sandy Hook to Cape May. The program dates back to 1984 and is sustained largely by donations of reef materials from private organizations and companies.