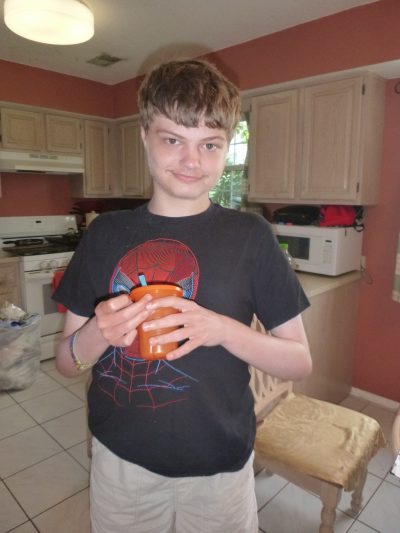 I suppose this is an anniversary of sorts- sixteen years ago this fall my eldest son was diagnosed with autism at eighteen months of age. It didn’t really come as a surprise- I had been concerned about his development going on a year, and the kindly developmental pediatrician who gave him the autism label only confirmed my suspicions about his divergent behavior. While I knew in my heart what he had, I had no idea how many challenges me and my husband would have to face, and how many difficult decisions we would have to make.

I will tell you this now- one of the best ones I made was to keep an open mind.

I didn’t come to this viewpoint right away. I quickly formed some very strong opinions regarding my son. I had read that autistic children who used sign language had a greater chance of talking later on, and I desperately wanted that for my son. I can remember making my case with his New Jersey Early Intervention team, and finally getting my wakeup call when his excellent therapists pointed out that he had minimal imitative skills and had mastered only a few signs over a long period of time. Fortunately I listened, and he moved on to the PECS system and eventually to an iPad, which he uses to communicate successfully every day. Apraxia has kept my son non-verbal- all the signing in the world would not have facilitated that type of communication.


Fortunately, I listened to the experts, not my heart.

Another strong opinion I had was that I wanted my son in a public school, so that he could have interactions with mainstream peers. When he was little he did interact with his more typical peers, but that desire dissipated as he grew older, and his needs outstripped what his local public school could offer him. His father and I were able to consider a private autism school when he was finishing first grade, and it remains today the single best thing we have ever done for our son. Had someone told me I’d be advocating for that when he was first diagnosed I would have rejected the concept soundly, but fortunately I listened to the experts once again who knew my child and his future needs, and we were able to make the right choice for his education.

None of these decisions was easy, trust me.

The truth is one of the single most important things I’ve been able to do for my son is keep an open mind regarding so many things that have affected his life- how he’s educated, medication usage, his manner of communication, etc. When your child is first diagnosed it can be so overwhelming- figuring out insurance coverage, Early Intervention or the process to get him or her into the school system, getting your child to eat, sleep, or simply just be happy.

So take one thing off your plate- don’t feel that any decision you make has to be made in stone, and make them one at a time. Be open to the opinions of those who know your child, and try to be flexible when considering what can best help him or her.

Do your best to keep an open mind.