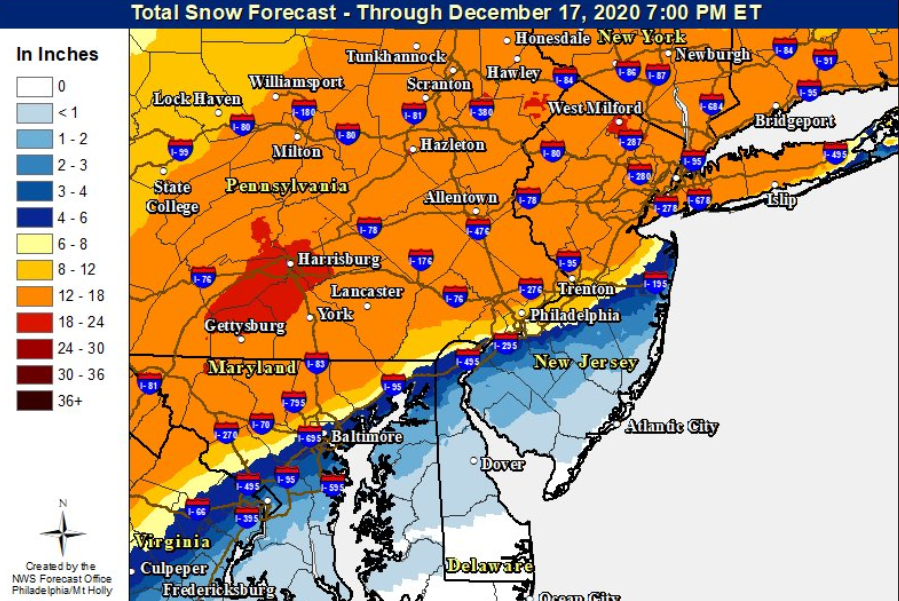 The National Weather service has still declined to issue a winter storm watch for coastal Ocean County, however forecasters are predicting a total of about 2-4 inches of snow from a nor’easter expected to arrive Wednesday and last into Thursday.

The NWS office in Mount Holly issued a coastal flood watch during the daytime hours Thursday, predicting a significant threat of tidal flooding. According to the watch statement, 1-2 feet of inundation above ground level is possible in low-lying areas near shorelines and tidal waterways from Thursday morning through Thursday afternoon.

“At this level, widespread roadway flooding occurs in coastal and bayside communities and along inland tidal waterways,” the statement said. “Many roads [may] become impassable. Some damage to vulnerable structures may begin to occur.”


While well over a foot of snow is expected in North Jersey and the western reaches of the state, the nor’easter will primarily be a rain event at the Shore, though forecasters have slightly raised potential snow totals over the past day. As of early Tuesday morning, the NWS’s maps show a 2-4 inch predictions in the northern Ocean County area, with the potential for some differences between even the barrier island and some mainland communities.

The storm will begin Wednesday with rain, mainly after 1 p.m., according to the forecast. Winds could eventually gust to over 40 m.p.h. On Wednesday night, rain will mix with snow and sleet before 3 a.m., then change to a mixture of rain and snow between for about an hour before changing to all snow after 4 a.m. The overnight low will be around 29 degrees. It will continue to be windy, with a northeast wind 25 to 30 m.p.h., with gusts as high as 50 m.p.h.