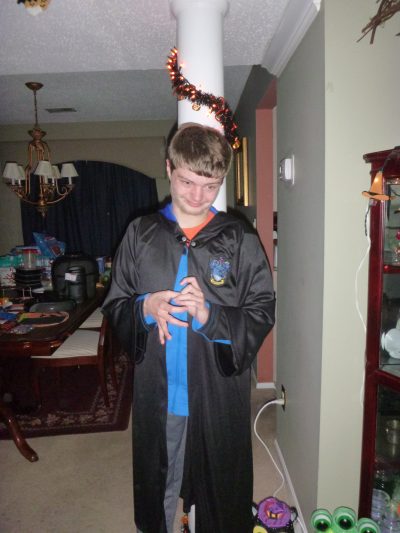 He draped his entire body over mine, my severely autistic teenaged boy. We were getting dressed and ready for in-person school which he loves, and he suddenly looked me in the eyes, gave me his half-grin, and pulled me close. He is inches taller than me now so has to lean over to hug me, but we make it work. After a few minutes we had to disengage to greet the day, and the moment was gone.

Gone, but not forgotten.

Three years ago when Justin was fourteen if you had told me he would once again bestow spontaneous hugs on me I would not have believed it. From age fourteen to fifteen we were immersed in a hellish world with him, with behavior that merited diagnoses ranging from dystonia to catatonia and beyond, multiple doctors visits in a myriad of states, and the complete absence of my son’s personality that we all loved. It was a year devoid of joy, which took its toll on me and my husband, but mostly on Justin himself.

Fortunately, we got the correct diagnosis of tic disorder, put him on the right medication, and much of what plagued him was eliminated.

I can’t tell you how many times in the past ten years or so I’ve had people tell me that fourteen has been the witching year for their moderate to severely autistic child. Puberty seems to wreak havoc on them, and co-morbid disorders that have been lurking in the recesses of their brains seem to rear their ugly heads. What got me and my husband through this was hearing time and time again from friends and acquaintances with older kids was that their children eventually came through the other side.

With time, they got them back.

Justin’s personality changed with this latest diagnosis, although it has been suggested to me that part of the changes can be chalked up to being a teenager, which I can’t argue with. I am thrilled to say that three years later most of the movement disorders that plagued him have disappeared, and his tic disorder does not seem to interfere with his life very much. His capacity for joy, although appearing to be somewhat diminished from my smiley younger son, has returned to a degree. He still reaches out for that contact on occasion, those hugs he still seems to need, much to his mother’s happiness. Sometimes he just turns to me and plants a big kiss on me for no reason, to my delight.

So, I just want to say this to any parent with an autistic child approaching puberty. Be prepared for changes both emotionally and behaviorally. If things go south, if progress made is erased, don’t give up. So many families have been there before you, and things have eventually improved. Keep hope alive, take care of yourselves in the meantime, and remember this.

Your child can come out the other side.