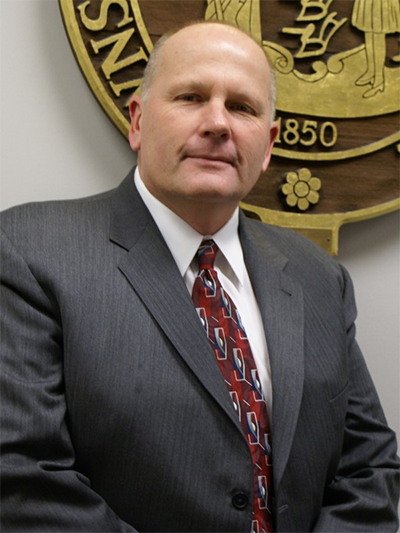 The retirement of Ocean County Commissioner (formerly Freeholder) Gerry P. Little has kicked off what is shaping up to be a cross-county primary between Republicans, with the latest candidate to throw his hat into the ring coming from Brick Township.

Little, of Surf City, will leave the board after 2021. He has served on the board since 2003. On Monday, former Brick Township Councilman Michael Thulen announced he will seek the GOP nomination to replace him. Thulen served on Brick Township’s governing body for 12 years.

“I wish to formally announce to the residents of Ocean County that I have decided to re-enter the political arena and consider myself the best candidate for the vacancy of the Ocean County Commissioner,” Thulen said in a statement.


Thulen said in his announcement that his mix between being a 36-year resident of the county as well as experience working with county government in his role with the state Board of Public Utilities makes him the most qualified candidate for county leadership.

“As an advocate for transparency and truth, I discovered my calling and the beginning of my political and public service career in Ocean County,” he said. “I joined the Brick Republican Club and was recognized by the fellow members as hardworking and quick to tackle problems which is why they voted for me to become club president.”

From there, he was tapped by the party to run for council, and served several terms.

Thulen also launched a website to go along with his announcement. Thulen is the father of former Point Pleasant Borough council member Michael Thulen, Jr.

The full text of the announcement is published below.

In the wake of the Honorable Gerry Little’s announcement that he will not be seeking re-election this year, I wish to formally announce to the residents of Ocean County that I have decided to re-enter the political arena and consider myself the best candidate for the vacancy of the Ocean County Commissioner.

I have resided in Ocean County for 36-years now, relocating with my family from Northern New Jersey in 1984. The primary reason I moved into this county was the same as for many other Ocean County residents who opted for a safer and healthier environment to raise a family, where jobs were readily available, shopping and malls were easily accessible, taxes were affordable, and the school systems were committed to stellar educational practices. This is a great county!

I was born and raised in Upstate New York in and around the farms, small businesses, and mountains of Poughkeepsie. It was a wholesome lifestyle where family ideals and the values of truth, honor, hard work were embedded in me at a young age and have since never failed me., These ideals and values have been there for all that I do and have done in my personal, professional, and public service life.

As an advocate for transparency and truth, I discovered my calling and the beginning of my political and public service career in Ocean County. I joined the Brick Republican Club and was recognized by the fellow members as hardworking and quick to tackle problems which is why they voted for me to become club president. I later proudly and respectfully served as a Republican Councilman in Brick Township for a total of 12-years. My wish was to serve with the assurance that issues such as the stabilization of resident’s taxes were monitored, our township’s roadway’s, children’s and resident safety was paramount to me. Also under our Republican leadership Brick’s municipality government was pro-active with regards to local businesses, cultivating new commercial business, economic growth, and that prudent township expenditure was recognized and exercised.

My beliefs drew me to the Republican Party on account of their always seeming to be the right party to handle the important, every day, and “hard-line’ issues that Americans face. This party has been the foundation of my political aspirations primarily because it encompassed the very same ideals that I learned at a young age in Upstate New York. You can succeed by working hard, overcoming adversity, being self-reliant, setting goals, and following through. That said, I am also just as equally passionate for bi-partisan politics especially in the wake of our most recent political climate. Now is a time for politicians to close this obvious divide, to put personal agendas aside, and truly serve their constituents in an honest and respectful manner for the benefit of everyone. I know I can and will serve Republican Constituents, as equally as I will serve Democratic Constituents in our county because it is right for the county, state, and country. I will reach across the aisle for the benefit of all of the residents that I will serve. I will operate an open book, open door campaign, and hopefully, Commissioner term where Democrats can be as comfortable bringing before me their concerns and issues as Republicans will; and all voters will get the attention and action from me that they deserve.

As a commissioner, I commit to the idea of keeping Ocean County at the top of the list of places to reside, work, and start your business in. My interests in serving as your commissioner are to focus solely on the future of Ocean County and our residents. These issues that are as important to me as they are to everyone in our great county include senior services, veteran’s affairs, persons with disabilities, public safety, open space, infrastructure, economic development, traffic, transportation, public health, and the preservation and maintenance of our county assets as parks, libraries, pine forests and the many buildings that the county operates.

I will support our county workforce, firefighters, police, first responders, and all front line personnel. I further pledge to work with my fellow commissioners, staff, and residents to cultivate an environment that will put everything Ocean County at the forefront. My experience as a former township councilman and my ability at planning, implementing, and communication will be an asset when I must negotiate with the Federal Government, the state of New Jersey, and neighboring counties on behalf of the 33 municipalities that make up Ocean County for funding, open space, revitalization, renovation, and economic development.

One quick example of my public service project experience is the Brick Township acquisition of the Traders Cove Marina property where an opportunity existed for the municipality to purchase, clean it up, and remove the public eyesore that it was and repurpose it as a township marina and recreation area. There are other such opportunities along our right of ways adjacent to the Barnegat Bay that are ripe for proper development and viable use.

In a recent position that I held with the State of New Jersey working on the Board of Public Utilities, I had the opportunity to work in conjunction with County Freeholders across our state to assist them with solving energy conservation issues and develop plans for alternate energy sources. In fact, one of the very same programs is right here in Ocean County where that capital energy project will save our taxpayers millions of dollars over the next fifteen years. I foresee the possibility of wind farms constructed in our county that will bring jobs in their development, maintenance, and cost savings for the alternate power sources that they generate. These wind farms represent approximately 15 years of construction jobs as well as another 30-years of high skilled jobs to maintain them.

As my team and I develop my campaign for county commissioner we will be gathering information and input from our many mayors, town officials, and most importantly, residents so that I can clearly and concisely respond, offer my thoughts and insights as to the many issues that need attention or are currently “Hot Topic” for Ocean County. For those of you that do not know me or have no knowledge of my political experience, I hope that this background and synopsis was able to offer to you a small glimpse of what I can do to make our Great Ocean County even better. I look forward to meeting many of you on the campaign trail as I eagerly seek your attention and support as election day approaches.

Please check-in at my website MikeforOceanCounty.com for more information on how to help or get involved.