You’ll have to cross the street for a hamburger, but a drive-through oil change business was approved to be constructed at Brick’s Bay Harbor Plaza shopping center Wednesday night.

In a 5-2 vote, the township’s Board of Adjustment approved an application by Meadowbrook Realty, owned by Michael Ferri, of Hartford, CT, to build a Valvoline Instant Oil Change location on the pad site on which a Hardee’s fast food restaurant was approved to be built in 2014. The Hardee’s project was ultimately abandoned, and there was no discussion at Wednesday’s meeting, held via Zoom, as to what happened.

The lube shop, however, is planned to be a 4,144 square feet of gross floor area including a basement level. Meadowbrook’s engineer, Brad Thompson, told board members the facility would be set up so drivers can receive oil changes without ever leaving their vehicle. The basement floor will serve as a sunken workspace for technicians, who will perform oil changes as cars roll in and out of the shop. A computer screen will be moved next to the driver’s side window of a vehicle once the oil has been changed, and the customers can pay immediately and be on their way.


Alternatively, customers can take a seat in a waiting area if they are not comfortable driving into the garage themselves, representatives for the company said. The Valvoline facility is expected to completed in relatively short order.

“The previous application for the fast food restaurant had much of the infrastructure built in,” said Thompson. “All of the utilities are readily available, and there are no large swaths of pavement that have to come up.”

The Valvoline facility, which will become part of Meadowbrook’s group of franchises in southern New Jersey, “isn’t a high-intensity use,” said Thompson, adding that there will be enough space to serve three vehicles at a time in the garage while three more wait – and that volume generally only occurs on the busiest of days. 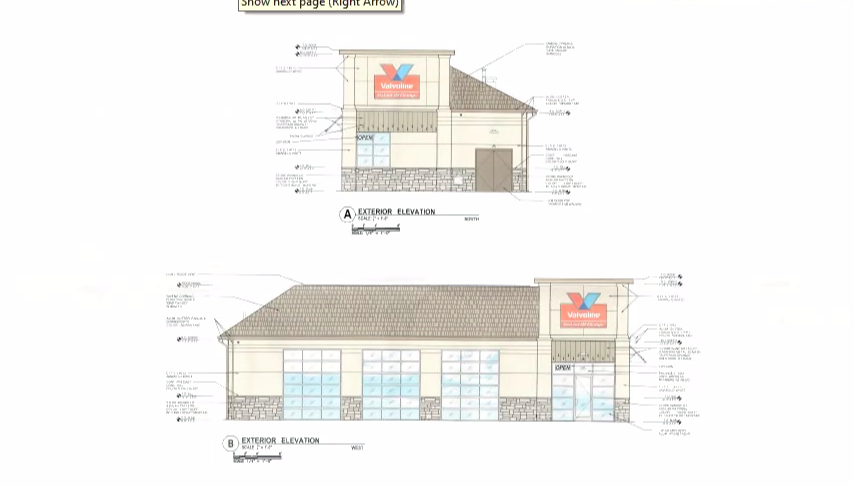 John Bedson, Meadowbrook’s regional manager, said different types of oils – traditional, synthetic, specialty formulations – are delivered in bulk once a week. Used oil is collected in a sealed-off tank that is located in the basement, then automatically pumped out by a tanker truck when full.

“Even if something does get spilled, we have multiple chemicals to clean it up,” said Bedson, responding to a question from a planning board member.

The facility, in the case of a spill, would use a material made out of volcanic ash to absorb the oil, and it would then be deposited in the tank for regular removal. There are no drains or other means for any spilled material to escape the sunken work area.

The pad site at Bay Harbor Plaza will be aesthetically improved alongside construction, representatives said.

“We will have approximately 52 new plantings out there, including shrubs, evergreens and ornamental grasses,” said Thompson.

Tara Paxton, the township planner, said she did not recommend creating pedestrian crossings at the site – the opposite of the township’s usual practice – because the Valvoline shop will be located in between a jug handle and the drive-through lane of the Starbucks coffee shop next door, creating a potential hazard.

The board granted Meadowbrook a use variance since automotive shops are a conditional use in the B-3 zone, where Bay Harbor is located. A variance was also granted so the facility can place its own sign at the shopping center.