Disney Once Again! A Brick Family’s Magical Visit With Their Son With Autism 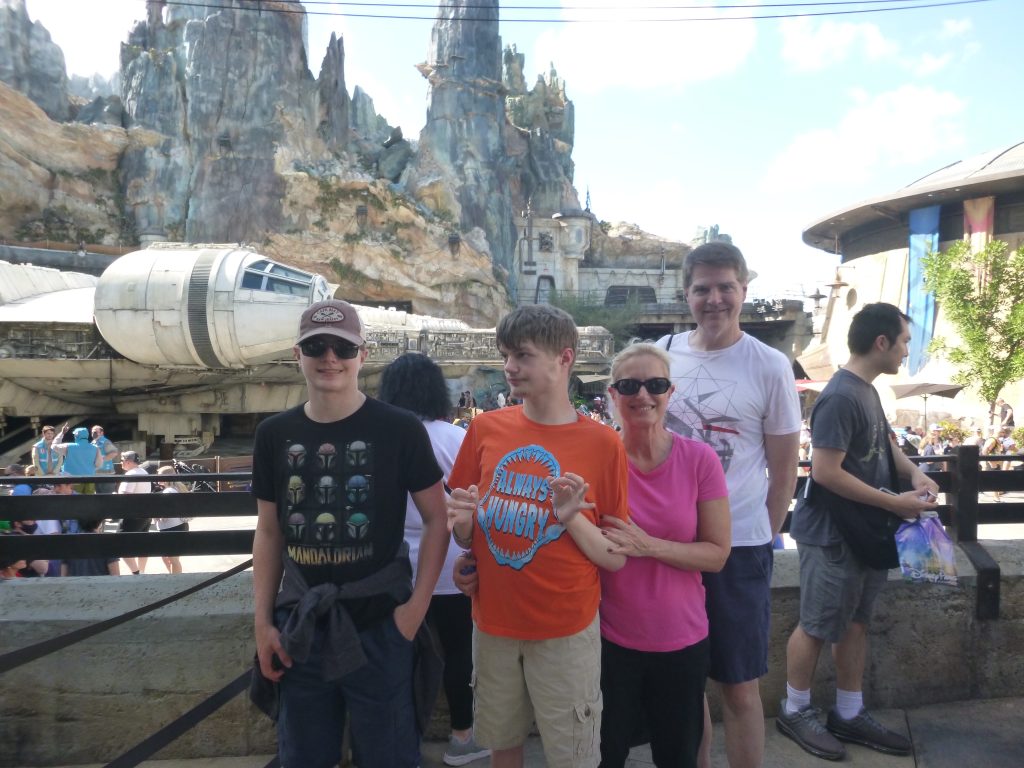 It’s a “Disney year” chez McCafferty, and this year we once again had the opportunity to take our kids to Disney World (Magic Kingdom and Hollywood Studios), including our severely autistic eighteen-year-old son. The weather was fabulous, Justin did beautifully on the plane and in the airport, and the trip, as it has been the last four times, was a resounding success.

As I know many families with autistic children aren’t even going to the grocery store with their kids due to meltdowns, I know how lucky we are, trust me.

I consider Disney a working vacation. You can’t “wing it” at Disney with an autistic kid- it takes a lot of preparation. Every time we’ve gone to Disney there has been some alteration of the disability pass. First it was cards you had to carry, then it was running around the park getting return times for rides on our passcards. This year was once again different on several counts, and required a lot of planning on our parts.

Disney is now implementing an opportunity to get approved for the disability pass prior to your vacation (you can still do it the old-fashioned way by going to Guest Relations as soon as you enter the park.) This new system involved going to the Disney website and getting in a queue for a virtual chat with a cast member who would decide if Justin qualified for the pass, then sign us up for two disability pass rides each day we were going to a park. We had to have all our guests listed prior to doing this so everyone could be included in the pass. My husband and I thought this would be a great way to avoid the sometimes lengthy lines at Guest Relations, so we thought we’d give it a whirl.

Fourteen hours later (I kid you not) we were good to go.

Once you register for the disability pass you are put in a virtual queue to wait for a cast member to come on and “chat” with you. The first day we did this we got kicked out three times (once because I had the audacity to go to the bathroom and the cast member signed off), and the third time never made it to the second queue. So my husband and I strategized, and realized the next day my son had a half day (the disabled person has to appear for the chat), we timed it out that we needed to start the process about four hours before he got home, and that’s what we did.

We were in the first queue for about two hours, the next one waiting for a virtual chat with a cast member for three, and luckily Justin got home about a half hour before the cast member came on to assess him. She deemed him eligible, then put us into another queue where we waited about twenty minutes. The third cast member asked us what rides we wanted for each day. We were not allowed to ask for times. After a few minutes we received our two disability pass rides for each day we were in Disney. The process, when not getting booted out for neglect, took about five hours (this was the first week they were offering it).

Once we got the hang of it it was worth the wait. Our only concern was that our other son really wanted to ride “Rise of the Resistance” and we couldn’t get the disability pass initially for that ride, but were told that after we used our two rides we could go on the “My Disney Experience” app and try to book it. We got lucky. Our second ride wasn’t until the afternoon, but as soon as we rode it my husband went on the app and booked “Rise”, and since it was only a two hour wait (same as the standby line minus ten minutes) we then went on the Star Tours ride several times, got snacks, and blissfully fulfilled our Star Wars needs with joy.

Honestly, I’m not sure who was happier, our youngest son or his parents.

Just so you know, you can still walk up to an attraction and book a ride, but it is much easier to do it on the app. Also, and VERY important- the ride reservation now expires an hour after it’s booked, which is different than before. All in all we were able to get on about nine or ten rides each day, did wait on a few hour long lines but not many, and got to do everything we wanted to do while we were there.

I will say that there was a lot of work prior to our trips to get Justin ready for this experience. Years ago we attended a program with American Airlines where Justin went to the airport and did everything but takeoff just to get him used to the experience. For years I took him out in public even when it wasn’t pretty, having him get used to rides and waiting in line. We waited until he was ten to take him because we figured a little maturity couldn’t hurt.

It turned out we made the right call to take him, and have been going every other year ever since.

Just a couple more tips- if your child is gluten free most restaurants have gluten-free options, you can research this before you go and pick a few in an area of the park you think you’ll be in around lunchtime. Eat early! We are only there at lunchtime but always try to eat around eleven. Always have a backup plan.

Although it was a pain (literally, my husband had neck fatigue from sitting on the computer so long) it was definitely worth the trouble to book our disability passes virtually. Who knows what the situation will be like in two years, but I would do it again.

I hope this helps any of you planning on heading down to Disney in the near future. Enjoy your trip!