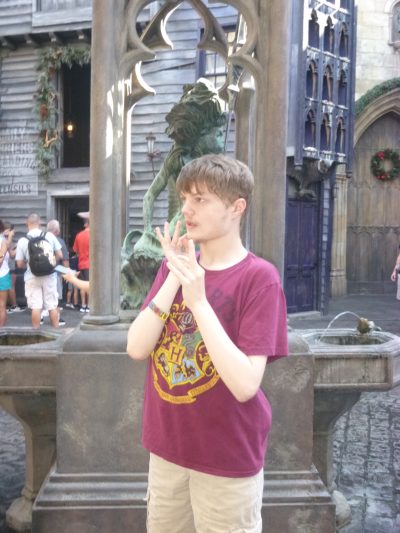 As I scrolled through my photo gallery looking for a perfect photo of my youngest son in his Boy Scout attire I got sidetracked, and started looking at older photos of my eldest son. In them he is always smiling, as I liked to capture those moments, even in times when they were few and far between. I stumbled upon one from his toddler days, a moment memorialized when he was grinning in his stroller, and all was right with his world.

There were some months, perhaps years, when those moments were few and far between.

I thought about how difficult it had been to take him anywhere when he was younger, beginning with his aversion to riding in a car (which we later learned was due to his facing backwards in his car seat). I recalled how almost any outing usually ended in tears and a meltdown, no matter how briefly we stayed at a location. I remembered how exhausted I’d be after these journeys, wondering if they’d ever get better.

And thank the universe, they did.

It would have been so much easier to stay at home, but I knew in my mother’s soul that this child needed to go places, and I felt eventually he would even desire to go places. While I wanted to remain sensitive to his cognitive issues, I knew he had to get used to interacting with the world, so we started small. I remember the winter before he turned two about the only place we could go was our local mall, a destination which had ended in disaster after a trip or two. I decided to gradually get him used to this new locale over multiple outings.

First we just drove to the parking lot, and I put him in his stroller and we walked around a little bit. The next few trips we practiced riding on the elevator to get inside the structure, and after a few trips he seemed eager for what came next. Then we actually walked around the mall, staying a few minutes longer with each excursion, never overdoing it. Eventually his little body wriggled eagerly when I put him in the car, and I would get smiles after we reached our destination.

I was so grateful we had somewhere to go.

I also used this approach with our local boardwalk. There is a lot going on at a boardwalk, many smells, sights and sounds, and at first it was a bit much for my boy. We started slowly and worked our way up from just walking on the boardwalk to trying a ride or two, and eventually were able to ride on multiple attractions with him. As he grew older he would go to the drawer in our kitchen, get out the tickets and hand them to me, which clearly meant he enjoyed going. The boardwalk grew to be a favorite haunt of his.

And none of this would have happened if I hadn’t kept on trying.

If you’re reading this and you’re struggling to get out with your autistic child, you may just be so exhausted from your attempts that it doesn’t seem worth it to make the effort. Believe me, it is so much easier to start when they’re younger than when they’re older and more set in their ways. Establishing a routine of going out will hopefully become ingrained in them, and eventually outings may become pleasant. Try to get people to help you when you go out at first, and have a backup plan if things go sour. Try a social story if that is something that helps your child understand what they’ll be doing next. Know when enough is enough. Keep trying. I now have an eighteen-year-old severely autistic child who loves to go places and is well-behaved at 99% of them.

And most of all, never give up.