Another calm night on Barnegat Bay (see the video above) represented the calm before the Friday-Saturday storm that could dump just 4-6 inches – or as much as 15-inches – of snow on the Jersey Shore. Meanwhile, a winter storm watch has been issued for the region. 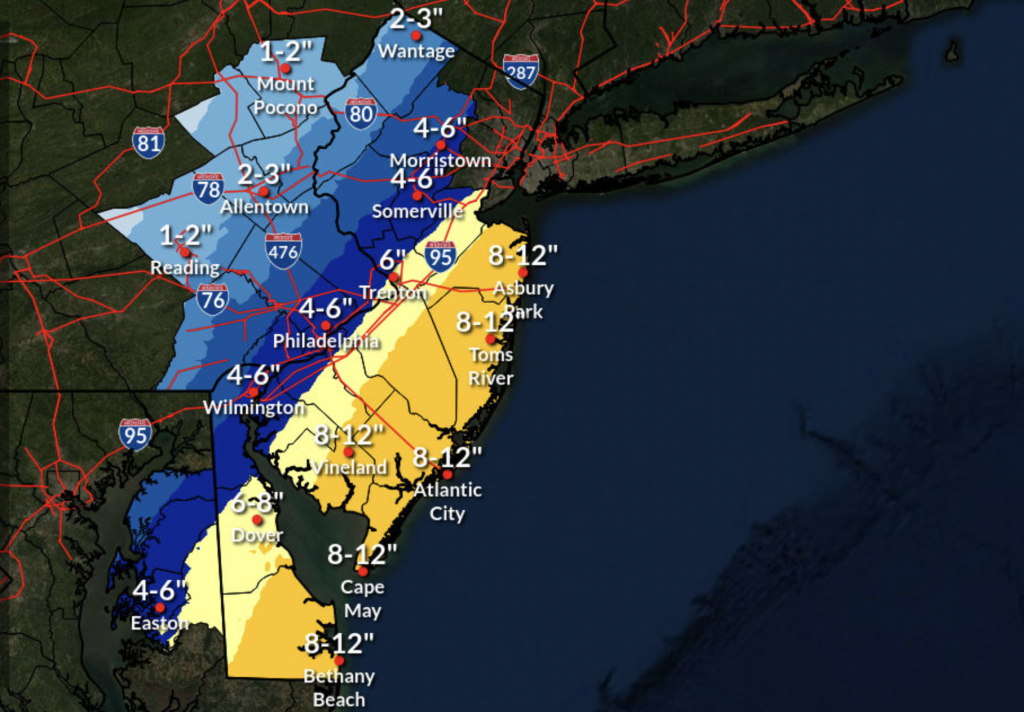 Forecasters said models varied wildly Wednesday into Thursday, as they tracked a nor’easter that was predicted to form when two storm systems combined around a digging jet stream. The GFS and Canadian forecast models showed a total of about 6-inches of snow, which drops off considerably just a few miles from the coast. But the European model – famous for its correct prediction of Superstorm Sandy’s path and something of a darling of coastal weather observers – provided the mammoth 15.5-inch prediction for coastal Ocean County. Most forecasters agree that the total will be somewhere in the middle, though there is a chance the storm could have far less of an impact, as just a minimal change in course could drastically alter the amount of snow that will fall.

The winter storm watch is in effect from 7 p.m. Friday to 7 p.m. Saturday. According to the watch statement issued by the National Weather Service office in Mount Holly, “heavy snow” is possible with accumulations of 6-12 inches. Winds will gust as high as 45 m.p.h., and will occasionally be higher at the coast.


“Travel could be very difficult to impossible,” the statement said.

“Snow is expected to begin Friday evening in Delmarva and southern New Jersey, spreading northward overnight into Saturday morning,” the NWS statement went on to say. “Snow may be heavy at times through mid afternoon before diminishing Saturday evening. Strong winds may generate blowing snow and very low visibilities at times. The storm total snow forecast remains very uncertain, so stay tuned to the latest forecasts.”

It is generally agreed upon that any precipitation that falls will be in the form of snow. No rain is forecast by the NWS; the service had previously predicted the system could start with a period of rain Friday. According to the current forecast, Friday’s high will be 35 degrees with a low of 25 degrees, however the snow is forecast to begin in the evening – later than previously expected. The overnight low Saturday night will be 15 degrees with linger strong winds, leading to a hypothermia threat for anyone exposed to the elements, the NWS said.

The snow will completely move out by 1 a.m. Sunday. During the day Sunday, sunny skies are expected to return, though with a high of just 28 degrees.