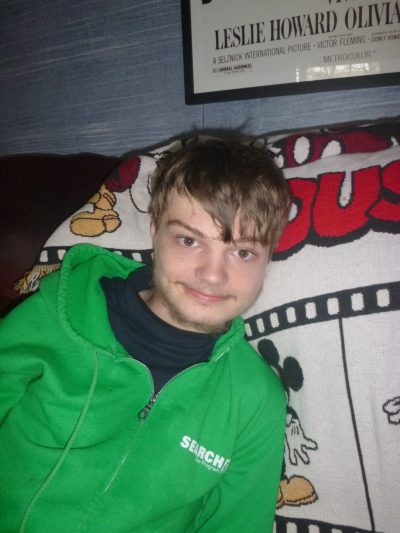 Justin looks at me quizzically from the confines of the shower as I hand him a new washcloth, one he is supposed to insert his hand into. I put it on him with some accompanying soap, take his hand and rub it on his alternate arm. He doesn’t move at first but then begins to slowly rub the cloth up and down to his elbow. I tap different body parts and manually move his hand, but by the end he responds just to the taps and moves his hand to his legs on his own.

It is these little triumphs that keep me going.

Over the years I’ve tried again and again to get Justin to wash himself, generally to no avail. He would drop the cloth or just not respond to my hand-over-hand manipulations, and over time I stopped trying, chalking this up to a life-skill he would never master.

Until my mom had a stroke of genius.

She happened to be in a store that sold the slip-on washcloths, picked up a few and sent them to me. I wasn’t sure how it all would go, but we’re several weeks in now and he is doing a great job. I still need to wash the places he misses, but it is a far cry from the days of halfhearted attempts and dropped cloths on the shower floor.

I say this a lot- never give up.

But know when to ask for help too.

With time and practice Justin has been able to master a number of life skills and chores, many of which he completes at school. I’m still struggling to get him to use a fork (I seem to be able to get him to use it with one food on his plate, then he’s done), but he can partially dress and undress himself, and partially brush his teeth. His teachers at school and a family friend well-versed in autism have been instrumental in helping him master these small objectives, and he would not be where he is without them. I’ve been so grateful over the years because I am the “big picture” girl- always thinking of ways to make the lives easier of the people who will care for him when I’m gone. The more he can do, the less they have to do for him.

And in reaching those goals, I’ve learned to ask for help.

If you have a young child with autism (or older too) and you’re struggling with life skills and chores, don’t hesitate to reach out to your child’s school and see if any of his or her teachers has suggestions. We are lucky enough to have had BCBAs from Justin’s school come to the home, and their recommendations have been so helpful. I reached out to my mom for this particular skill, and he’s improved greatly.

It’s so important to push them as far as they can go.

Now that we’re doing better in the shower I’ll be focusing more on using those utensils and washing dishes (nice for me too!). The important thing is to target one skill you feel is important, check with your resources, and try your best.

Your child may just surprise you.