A Brick Township man was lodged in the Ocean County Jail after allegedly approaching people on foot seeking to buy drugs, then engaging in an altercation with police officers.

Gerald Snyder, 39, was taken into custody March 2 just after 8:30 p.m., when detectives from the Brick Township Police Department’s Street Crimes Unit “stopping people in vehicles and on foot, appearing to be loitering to obtain [drugs],” said Ptl. Victoria Finelli. 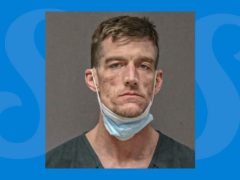 The suspect was said to have been riding a bicycle through various parking lots on Route 88. Snyder was arrested in the parking lot of the Dollar Tree store at 1930 Route 88.

“During the investigation, it was determined he was under the influence of a controlled dangerous substance,” said Finelli. “As detectives advised him he was under arrest, he charged at officers, and a scuffle began.”

Police allege Snyder resisted arrest and, during the scuffle, attempted to grab a pocket knife in his pocket. Snyder was eventually placed under arrest and is accused of having a quantity of crack cocaine and drug paraphernalia on his person. He was charged with loitering to obtain drugs, possession of a weapon for an unlawful purpose, resisting arrest, obstruction, possession of a weapon (pocket knife), possession of crack cocaine, aggravated assault on a law enforcement officer and under the influence of a CDS. Snyder was processed and lodged in Ocean County Jail.

He was no longer listed as an inmate at the jail as of March 8.

Brick PD’s Street Crimes Unit reported three other arrests as part of its larger crackdown on quality-of-life crimes through proactive policing. They include: