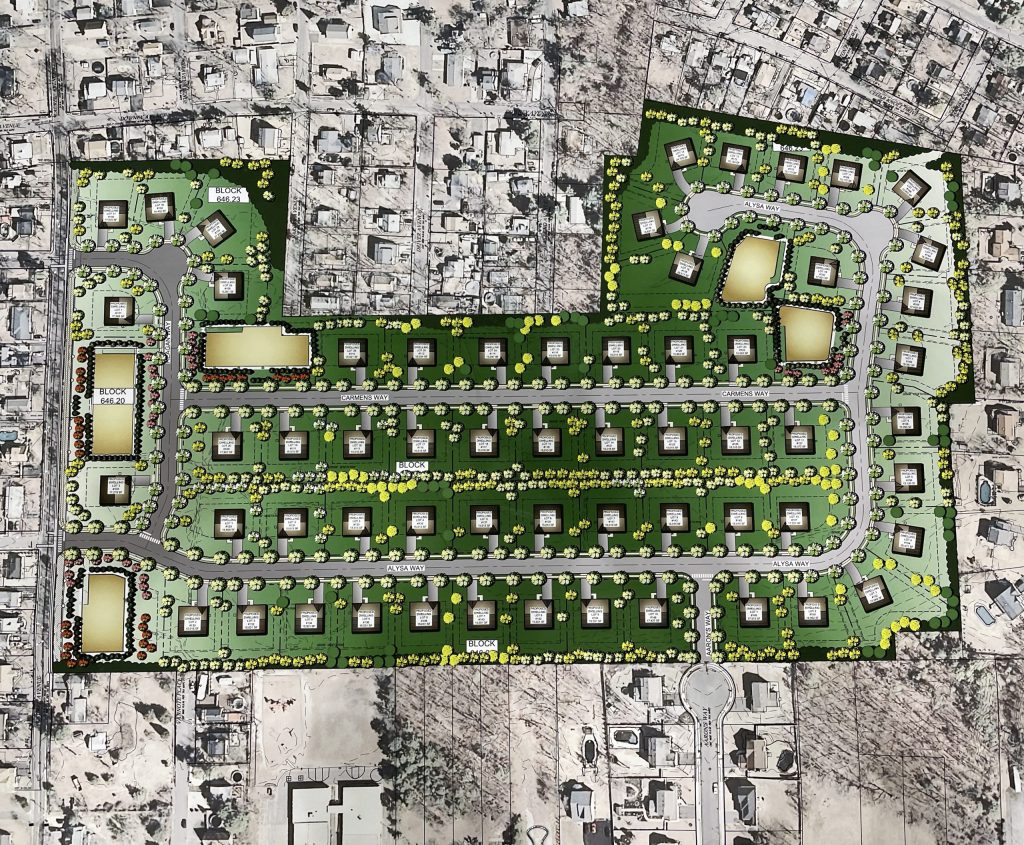 The Texas-based developer that has been selected by the Roman Catholic Diocese of Trenton to build a 59 home community on a parcel of land owned by the Church of the Visitation in Brick hit multiple major snags during its first full hearing on the controversial proposal Monday night.

The largest physical space owned by Brick Township, Civic Plaza, was nearly filled to capacity with residents wearing shirts and holding signs opposed to the planned development. Periods of cheers and jeers from the crowd sometimes broke the usual monotony of a planning board meeting, but it was the findings of Brick Township’s professionals that posed the greatest challenge to D.R. Horton, based in Austin, Tx., which is under contract to buy the 30-acre property off Laurel Avenue and develop it. The hearing technically began last month, but was postponed after about 10 minutes of testimony when the meeting room at the township municipal complex reached capacity.

What Is Being Built?


Representatives from D.R. Horton who testified – thus far all employees of firms that have been contracted by the company – told board members that the 59 homes would be divided between four bedroom and five bedroom units, with the vast majority being of four bedroom variety. The homes will vary in size, topping out at 3,200 square feet. Most will come with basements, depending on the grade of the land once the property is subdivided, which may be finished and turned into a “rec room” by Horton, upon request.

“We anticipate the vast majority being four bedroom,” said architect Robert Regazzoni. “Unless there is some market shift toward five-bedroom homes, it will be almost all four bedrooms.”

Victoria Gianakos, a neighboring resident, asked if the developer had considered the fact that many of the homes in surrounding neighborhoods are smaller, and whether the intensity of the proposed community fits with the character of the area.

“Most of the homes in that area are small bungalows and Capes,” she said. “A few have additions and some have had new construction, but these seem much larger.”

“The market is what guides us,” replied Regazzoni. “There is a community in this township, right down Mantoloking Road, with larger homes than what we are proposing, and we’ve had very good success with the two models we’re proposing.”

Regazzoni said the models being proposed for the Brick development are not D.R. Horton’s largest.

An illustration of the proposed mapping of the development is embedded in this story. Clicking it will unveil a larger, more detailed image. More technical architectural documents are embedded below in PDF form. 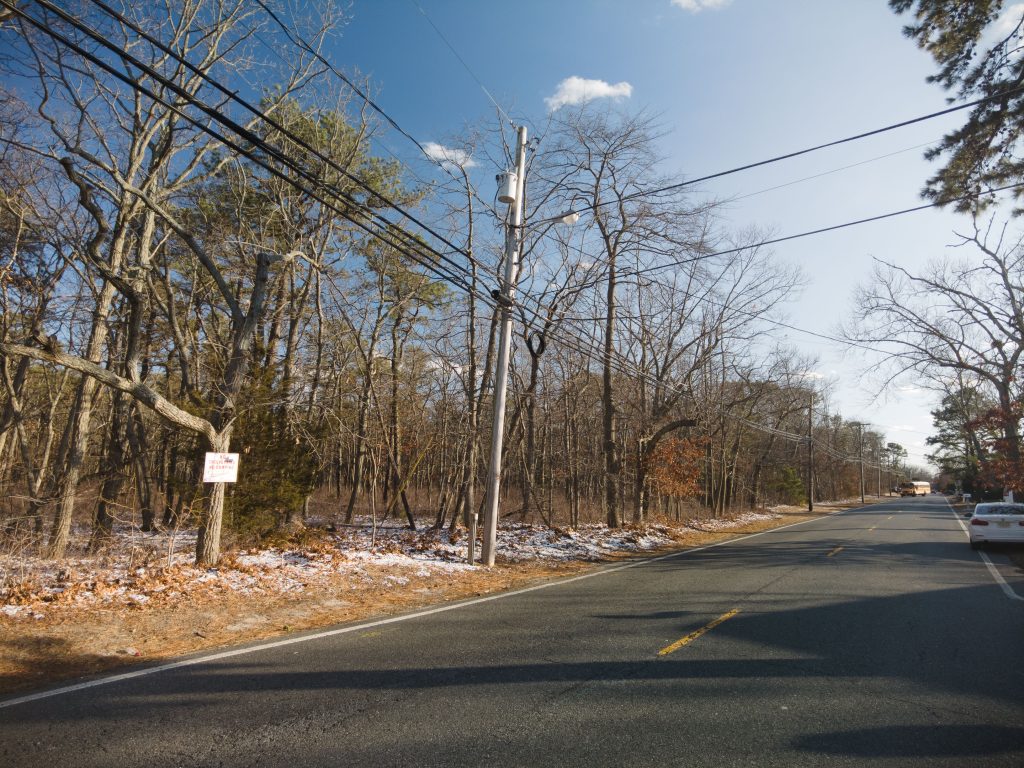 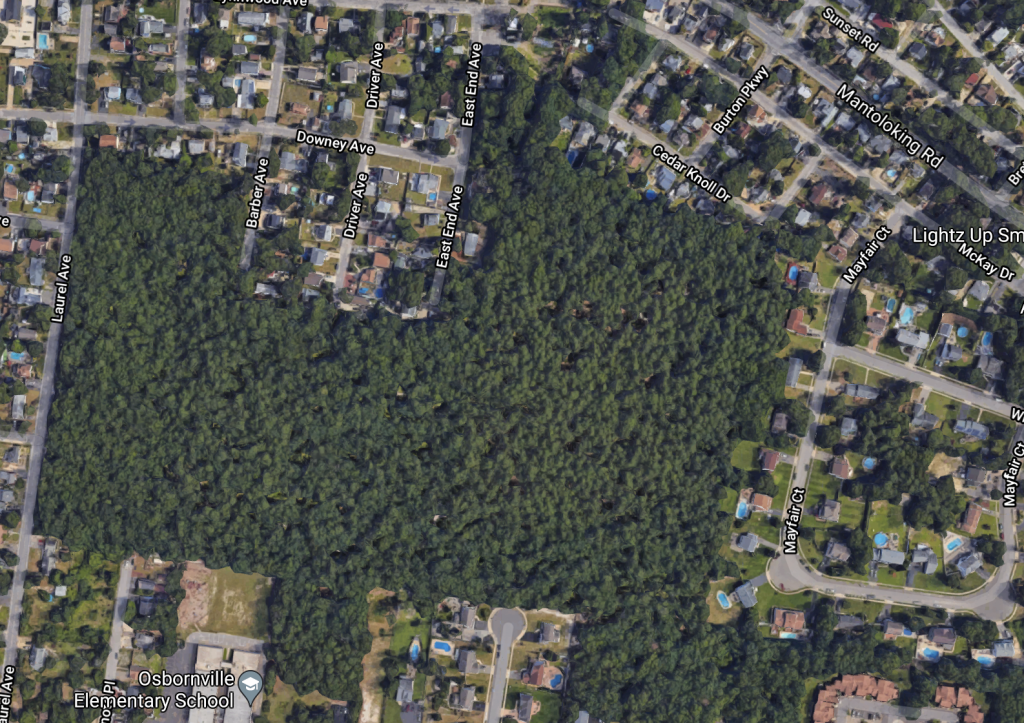 Leanne R. Hoffmann, the project engineer, said no variances are required for the development since the homes comply with the R15 zone in which the property is located. That zone calls for single-family homes situated on lots at least 15,000 square feet in area.

The new development, which was revealed to carry the name “The Havens at Metedeconk,” will have its main access point on Laurel Avenue, a north-south county road that runs between Mantoloking and Drum Point roads. Hoffmann said township officials insisted on an additional access point along Aarons Way, a small street off Drum Point Road. The announcement of the second entrance produced groans of opposition from the residents gathered at the meeting.

While the development complies with the township’s zoning ordinance, several challenges remain, including a controversial plan to build streets out of a maintenance-intensive porous material that would be taxpayer-funded once the street is dedicated to the public grid. No other streets in Brick Township are currently paved with the porous material, officials said, and Hoffmann admitted this was the first time she had designed – or reviewed – a project that included the use of such material.

The porous street material is one part of a larger discussion that has been ongoing between the developer and the township regarding drainage at the site, which many argue is environmentally sensitive and is situated over an aquifer. Initially, D.R. Horton had proposed installing 72 “bio-basins” across the development, on homeowners’ properties, that would have been two feet deep, graded and landscaped.

“It provided a way to treat the stormwater runoff using much smaller basins,” said Hoffmann.

Township officials, however, strongly urged the developer to propose traditional retention basins, since the 72 bio-basins would have led to a scenario in which D.R. Horton would have had to request a staggering 220 variances plus address “dozens” of issues that were identified by the township’s planner and engineer.

“I don’t think it’s something that would ever get to the point where the board would even consider it,” said board engineer Brian Boccanfuso, who also took issue with the porous pavement.

“I have never seen a roadway designed to be dedicated to the municipality that includes this pavement,” he said. “It does present maintenance issues. It’s not akin to a traditional roadway where you just sweep it every once in a while.”

Additionally, D.R. Horton has proposed setting up a homeowners’ association that would assess residents for the upkeep of some community landscaping, signage, plus five retention basins. The HOA would also, according to planning documents, preclude future homeowners from building accessory structures such as sheds, decks, pools and similar features. Township officials questioned whether this regulation could simply be changed once the properties are sold, leading to significantly more impervious development than what is represented by D.R. Horton based on the assumption that the HOA will enforce the rule.

Tara Paxton, the township planner, said state law does not allow the local government to enforce HOA restrictions, even if they are kept in place. Decisions on such additions, at the township level, would be based on state and local building codes only. This revelation led to a wider discussion which ultimately lasted the balance of the meeting.

“t seems like a burden on the homeowners over anything else; I don’t know why they would want this HOA,” said Boccanfuso, who said the impervious coverage – the amount of land which will be covered by hard structure – indicated in planning documents is “not an accurate representation … of the future impervious conditions and therefore it does not paint a clear and honest picture of the future stormwater impact.”

“People, in the future, could decide to put things in their rear yards,” he said. “My professional opinion is that it’s not accurately analyzing the conditions when you’re looking at pre- versus post-construction.”

Some also questioned whether the HOA could be counted-on to remain active in assessing residents for upkeep costs.

“Why are we being punished if they want to improve it or expand it?” he asked. “We have a soil analysis that says these soils are excellent for drainage and infiltration. We contend that we meet the conditions of the ordinance, and if there is something that impacts stormwater, that can be addressed in the [township’s] stormwater management ordinance.”

“We designed for what we’re proposing to build,” he told board members. “D.R. Horton, as a builder of homes, prepares these homes and that’s what they sell. They don’t sell accessories. Our point is simple: at this time, our plan meets the criteria of the ordinance.”

Paxton asked Giunco if his client would consider an impervious coverage limitation as a condition of approval, which he declined. Ultimately, both the developer and township professionals agreed to meet and hash out the concerns, then have the developer back to present an updated proposal to the board.

“The stormwater is the primary engineering item we have questions about,” Boccanfuso said.

The board will take up the hearing again at a special meeting scheduled for April 18 at 7 p.m. at Civic Plaza, 270 Chambers Bridge Road.