‘Keep an Open Mind:’ Why We Moved to Brick After Our Son’s Autism Diagnosis 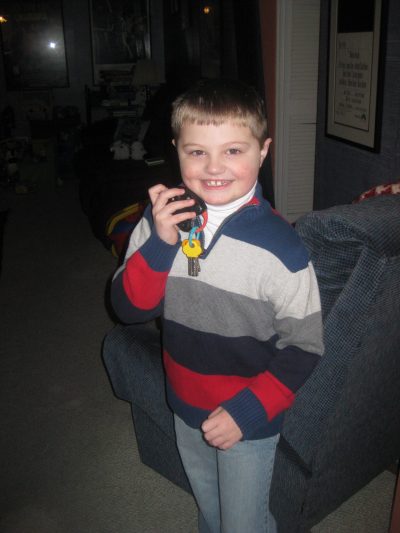 Sixteen years ago this winter my husband and I and our then two-and-a-half year old severely autistic son moved from Northern Virginia to the Jersey Shore in search of better Early Intervention services and to be closer to family (okay, and the beach too). Despite the fact that I am originally from the area and had friends and family here it was wrenching to leave DC- we had fifteen years of friendship, careers and the city itself to miss and we honestly thought we’d be retiring down there.

It was however the best call we could have made- we needed the help from family, Justin finally got some excellent services and the options for his schooling were much better as well.

As much as I miss our life down there, I don’t regret our decision.


When we moved up here I was constantly doing research about how best to help our son, and some of it was conflicting. Should we do ABA or Floortime? Sign language or PECS? Try the gluten-free casein-free diet? There were so many things to consider, and I tried to educate myself about all of them. I often consulted our very knowledgeable Early Intervention therapists on different topics, but I recall one I was very stubborn about, which if I had adhered to it would have truly set my son back.

I questioned whether or not we should do sign language or use the PECS system.

Much of the research I had done indicated that kids who do sign language have a better chance at speech, and I clung to that research like a life raft. Justin never really had speech- just “ma” and “ba” prior to his first birthday, sounds which disappeared after that milestone. I wanted to do everything I could to facilitate the spoken word, and had been working with him diligently on trying to elicit sounds through sign language. By the time we moved to New Jersey Justin was signing, but only doing about three signs with accuracy, and sometimes not even those. I remember being adamant at one of our team meetings that sticking with this method would be best for him, even though his team disagreed.

Thank goodness I finally listened to what the lead therapist was saying about his poor gross and fine motor skills, and agreed to try PECS with him.

PECS is a communication system where a student takes a velcroed picture off of a book and presents it to an adult as a mand (demand) for that item. I remember my trepidation when one of his therapists tried it out with him for the first time, but he took to it like a duck to water. Using this book helped reduce his meltdowns because he wasn’t so frustrated all of the time, and eventually he was able to transfer to Proloquo2go on his iPad and type Google searches as well. The truth is he never developed “spoken speech”, but he wouldn’t have developed it if I had kept on trying sign language, and instead he would have become more and more frustrated with his inability to communicate.

I learned a lesson that sometimes my gut is wrong, and I have to listen to the experts.

That lesson has kept me in good stead all these years, especially when his school has suggested we try something with him that seemed counterintuitive at the time. I’ve found they are usually right, and I’ve learned to keep an open mind with any of their suggestions.

So if you’re just starting your autism journey and the research I know you’re conducting conflicts with a therapist or specialist you trust, give it consideration. I’m so glad I did sixteen years ago, and will continue to do that with his therapists, doctors and teachers down the road. You never know what could be the key to unlocking more progress in your child.