At the Boardwalk: Sharing Shore Love With My Teen With Autism 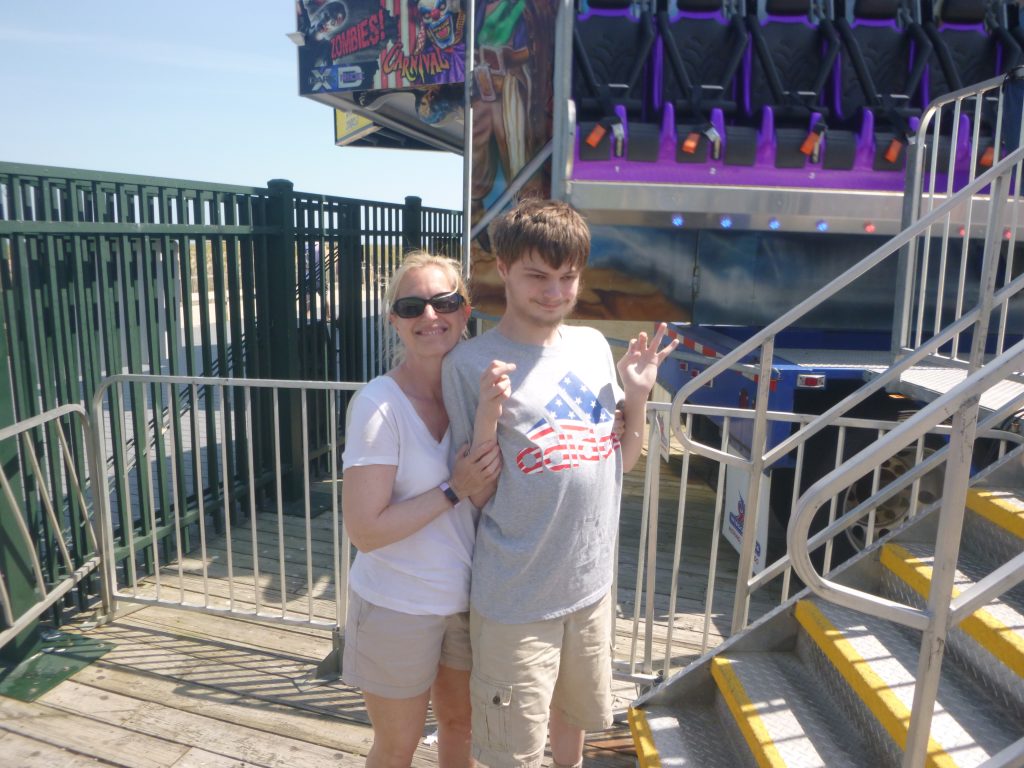 This week in the 90-something degree heat (I’m a glutton for punishment) I took my nineteen-year-old severely autistic son to our local boardwalk, something I’ve been doing for sixteen years, for the most part until recently without an issue. I won’t lie and tell you in the beginning it wasn’t rough. I have a few permanent bite marks on my shoulders from when he was little and I could still carry him, and in those days a trip might stop almost before it began. But I perservered with him because I knew in my heart it would be something he eventually loved, and equally important something he could do through adulthood.

And eventually he learned to love the rides and the pretzels and the long walk on the boards, and it was one more blessed thing I could do with him on my own.

Since Covid has struck, that ability to take him on my own has been sorely compromised. We didn’t go for about a year, and then last spring I went with my sister-in-law for the first time in twelve months and it was disastrous. Justin insisted on going in the Fun House which he hasn’t wanted to do in over a decade, which is not a great place for him. We did that, then he wanted to go back in through the exit, then wanted to explore a locked door that lead to the underbelly of the attraction, then completed the trifecta by refusing to leave after wanting to go in a second time. I had to call my husband and brother-in-law to come get us, and it took the four adults to get him back into our car.

Not a stellar outing for us.

I managed to get him there a few more times this past summer with help from our friend who is a strong young man, and I definitely needed his help from thwarting Justin from going on one ride that isn’t safe for him (a centrifuge that is the inner circle of hell) and from keeping him from trying to go on every ride in the park, even ones he’s too big for anymore. We pulled off these visits fairly successfully, but I was exhausted at the end. The boardwalk is supposed to be fun.

And it is my hope, with a wonderful behavior plan by his school’s BCBA, that it will one day be fun again.

We tackled Jenks in the heat the three of us, my boy, his BCBA, and myself. We started teaching him to use a long strip I created of pictures of rides, him eating a pretzel, and my car, to give him a sense of what comes next on these outings under the new rules. The goal is to get Justin to go on three to five rides (all appropriate ones for him), eat a pretzel, walk the length of the boardwalk, and go back to my car.

And that, our excellent BCBA reminded me, will take practice.

So over the next month I will harangue my husband and our family friend to get down there, and get Justin accustomed to the new rules (which aren’t really that much of a divergence from the old) so that eventually I can take my boy back, just him and me. I will let you all know how it goes.

The truth is I’ve had to let some things go as he reached adulthood, as I would with any child. But I’m not ready to give up on this. It’s too entwined with memories of him as a little boy, with the smells of the sea air and the pounding of the surf and the solid feel of the boards. Since he developed tic disorder five years ago he doesn’t display joy as he once did, but I know some is still in there.

This is a place of joy for him. And I am determined to win it back.

With fingers crossed, and a plan from ABA, I hope to do just that.