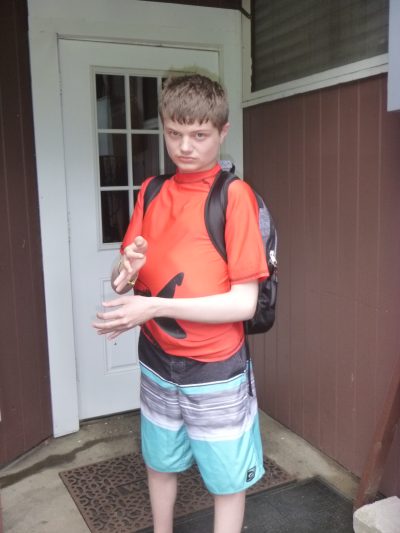 I know, it’s been forever. And I apologize.

So much has happened in the last few weeks that it will take several posts to recount it all. My youngest son fell and broke his hip, which has pretty much consumed us this last month. He is making progress, still finishing up his freshman year, and mostly has a great attitude about it all. My eldest is making strides at being able to handle our local boardwalks again, and most importantly, for the first time in nineteen years spent time away overnight from his family.

It’s this last pivotal event I want to write about today, because I frequently remind myself of it just to remember it’s true. We sent him to Rising Treetops at Oakhurst, a camp he went to for day camp once three years ago. It was closed in 2020 along with the world, and last year they were only doing two week sessions of sleepaway camp, and his father and I were just not ready to take the leap.

And a leap of faith it was.

We tried to prepare him as best we could. His teacher and I bought two calendars, one for home and one for school, and we wrote on each square “home” or “school” for several months. When it came to his camp week I pointed out all the squares that said “camp,” and sent the calendar with him in the hopes that staff would show it to him daily.

You see, one of the biggest fears my husband had was that he would think he’d be staying there forever, that we’d never go get him. This is the only way I could think of to let him know he’d come home again.

According to the staff member who worked with him the most, he ate well. He slept, although up at 5:00 AM a few times, but he slept.

They said he even smiled.

When I went to pick him up there was no mad rush to my arms, as befits a teenager. But when I called his name he walked up to me, leaned in, and rested his head on my shoulder.

I asked him if he had had fun, and he gave me the coveted nod. I asked if he’d like to go back again, and saw him nod again. For Justin, that is a rousing endorsement.

His father and I are thrilled. We are ecstatic that there is one more thing we can add to his leisure repertoire, which has scant few activities to accompany it as the years progress. And we are thrilled, as this camp does respite throughout the year.

It opens up the possibility for Jeff and I to get away for a weekend. It may let us attend friends’ children’s weddings. It enables the three of us to take Zach on college tours.

It will let me slip away with my girlfriends and know my husband is only left with one kid to care for.

It is a miracle.

It is an accomplishment made by his family, teachers, therapists, and everyone else who’s helped him become his best self over almost two decades. It is an achievement forged in tiny steps, in avoiding short cuts, in sticking to demands made.

It is a milestone made in hope.

And despite all the help, it is mostly his. Because if he didn’t want this broadening of his life experiences, it never would have happened.

I can’t wait until next summer (or sooner).

I am so proud.