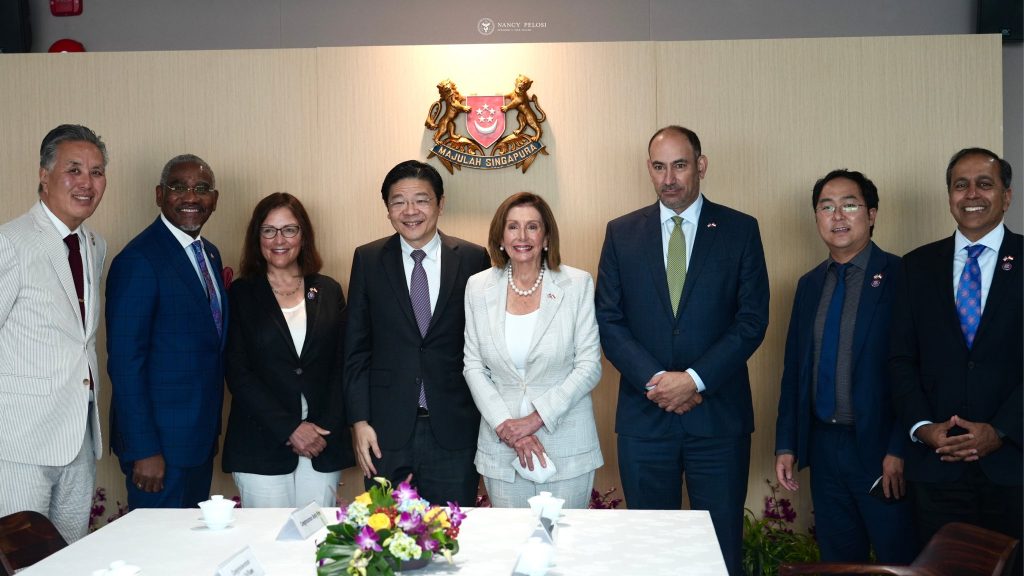 U.S. Rep. Andy Kim (D-3) is accompanying House Speaker Nancy Pelosi (D-Calif.) on her trip to a number of Asian cities, including what is believed to be an imminent meeting in Taiwan that has prompted numerous threats from the Chinese Communist Party.

Kim was one of a number of Democrat officials photographed with Pelosi as part of her contingent during a stop in Singapore earlier Monday. It has been widely reported that the group has added a visit to Taiwan to its agenda, ushering in a round of fresh threats from China’s regime, which considers the island a rogue province rather than a sovereign nation.

Our delegation today had the great privilege of meeting with Deputy Prime Minister and Finance Minister @LawrenceWongST in Singapore. We discussed how our nations can continue to work together to advance security, prosperity & opportunity for those on both sides of the Pacific. pic.twitter.com/6qSwB47ICY


Chinese Foreign Ministry spokesman Zhao Lijian said Monday morning that if Pelosi “dares to go” to Taiwan, the People’s Liberation Army would not “sit idly by.” It is already Tuesday in Taiwan and along China’s east coast. An aircraft that has been carrying portions of the contingent, a U.S. Air Force C-40 – a militarized variant of the commercial Boeing 737 – was traveling in the general direction of Taiwan and may stop in Japan before continuing its journey.

John Kirby, defense department spokesman, said in a briefing Monday afternoon that the Chinese military is “positioning itself to potentially take further steps” as a reaction to the trip. Pressed on what those steps might be, Kirby responded that the PLA may perform missile drills, send military aircraft closer to Taiwan or initiate a provocation in which China asserts its rejected claims of sovereignty over various islands, outcroppings and territories in the South China Sea.

The U.S. delegation’s method of transport to Taiwan, should the stopover occur, is thought by many in the intelligence community to be as important as the visit itself. The C-40 is adorned in the signature light blue and white livery that is customary for high-profile visits abroad, however it is common for politicians, in tense circumstances, to utilize USAF C-17 transport and cargo aircraft modified with passenger seats for their journey. The C-17 is paired with powerful engines and a robust suite of direct and electronic countermeasures. Alternatively, the air force as well as civilian arms of the Department of Defense operate a sprawling fleet of business jets and turboprop aircraft that utilize civilian registrations. Taking one of these planes, observers have suggested, would mean more security for the group, but could pave the way for the Chinese Communist Party to claim they dissuaded American officials from making a visible entrance.

The contingent is also expected to travel to Japan, Malaysia and South Korea on the trip.

The United States and Taiwan both have assets that could respond in a contingency should China effectuate some form of intervention. Taiwan has upgraded its F-16 fighter fleet to the “Viper” standard in recent years, and this weekend live-fired Mica missiles from its Mirage 2000 fighter fleet. The USS Ronald Reagan strike group has also moved into the area with its complement of F/A-18 Super Hornet fighters, and several amphibious assault vessels bristling with U.S. Marine Corps F-35B fighters are on hand, as well as squadrons of F-15E Strike Eagles that have the technical capability of reaching Taiwanese airspace from their Japanese bases.

Kirby said in his briefing that the executive branch, as well as the media, would have knowledge of the group’s presence in Taiwan since military aircraft are being utilized for the flight.

Though congressional representatives have traveled to Taiwan before, Pelosi’s visit has been magnified due to her position as speaker and, thus, the third person in succession to the American presidency. The last visit to Taiwan by a House speaker came in 1997, when U.S. Rep. Newt Gingrich (R-Ga.) visited on the heels of the third Taiwan Strait Crisis.