Brick officials unanimously passed an ordinance this week prohibiting so-called “light trespass,” a condition that has proliferated with the advent of cheap and powerful LED lighting systems, combined with taller homes being built on lagoons and waterfront areas.

Officials, in passing the ordinance, were quick to point out that the township would not be penalizing residents with typical driveway flood lights or decorative or functional outdoor lighting. But in a limited number of cases around town, residents have had to live with bright lights glaring into their bedrooms every night from neighboring homes – only for the neighbors to double down and increase the onslaught after concerns were expressed. Moreover, the victims had no recourse and remained at the mercy of their neighbors since no light trespass ordinance was on the books.

Such ordinances have become commonplace in local towns in recent years, as large, tall homes with significant numbers of bright lights have replaced the smaller homes torn down since Superstorm Sandy. Though problems have been seen in many locations, most cases have been in lagoon and waterfront neighborhoods. Some residents came to this week’s meeting of the township council to urge passage of the ordinance, explaining how they haven’t been able to sleep or use their outdoor patios due to bright lights shining on them on a constant basis. 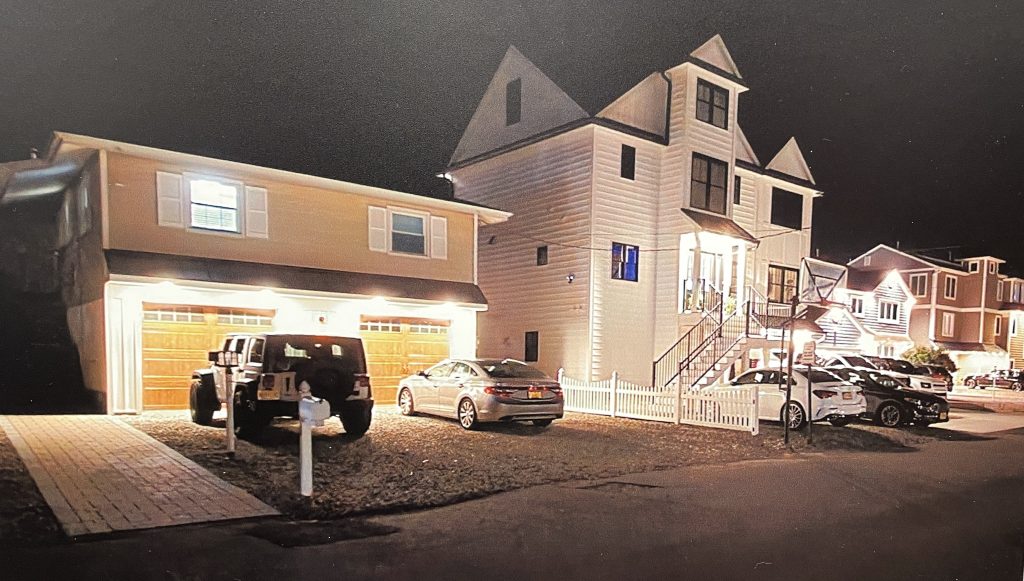 “Nobody has a right to bully or intimidate their neighbors, and that is what’s happening right now,” said one resident, whose name Shorebeat has withheld, telling council members that the offending neighbors have been uncooperative to the point of intentionally expanding their outdoor light display. “These people just want to put up bigger and bigger lights.”

“I look forward to regaining the enjoyment of my home,” said another resident, showing photographs of brightly-lit streaks glaring across her street.

Charlie Bacon, another resident, said he did not necessarily oppose the ordinance in whole, but asked whether current lighting could be grandfathered-in by the ordinance.

“There are a bunch of streets in Brick right now that are completely dark, without street lights,” he said. “There are some things I question about unknowns.”

The residents, however, said grandfathering-in lights that are already in violation of the proposed ordinance would largely negate its utility.

“This [can’t] be grandfathered, because we’re suffering now,” one replied.

According to the ordinance, placing or maintaining outdoor lighting that “provides a continuous, concentrated beam of light extending beyond any property lines” will be prohibited. The ordinance specifically exempts spotlights and garage door lights that are controlled by a motion detector, so long as the light turns off within 10 minutes after activation.

The ordinance also bans placing or maintaining spotlights or other types of artificial lighting “extending beyond the vertical plain of the face of any building or structure that causes a continuous beam of light to be reflected upon any adjoining property or public street.” Likewise, motion detector lighting is exempted.

Officials said police and code enforcement officers will not be patrolling in search of lighting violations, but the ordinance can be employed in extreme cases, such as those described by the residents at the meeting.

“This ordinance is very, very clear as to what is permitted,” said Councilwoman Marianna Pontoriero. “What is not permitted is trespass by a light source onto or in a neighbor’s property. We don’t need to worry about inconsistencies in the ordinance because this ordinance is held by various towns with similar issues.”

Pontoriero said she personally was contacted by “twelve to fifteen” residents since the ordinance was introduced earlier this month expressing support.

“I think this is a wide issue,” she said.

“We’re not in business of interfering with people’s personal lives in their homes,” Councilwoman Lisa Crate added. “We do, though, have a responsibility. It’s not about people who have porch lights or driveway lights – this is about lights that are detrimental to people’s daily lives.”