Nor’Easter Expected Thursday, Friday: No Snow for Shore, But 1-2 Inches of Rain and High Winds

Note: The video above shows sunset above the Point Pleasant Canal and Bay Head Harbor on Tuesday night.

Forecasters are expecting a coastal storm to roll through the Jersey Shore region Thursday and Friday of this week, bringing heavy rain, strong winds, rough surf and some tidal flooding to the area. Unlike some of the northernmost regions of the state, however, the Shore will avoid snowfall.

Rain is expected to move into the region by the afternoon Tuesday, according to a briefing package issued by the National Weather Service office in Mount Holly. The storm will last through Friday, bringing total rainfall of 1 to 2 inches, which may lead to localized minor flooding in some areas. While temperatures locally will remain well above freezing, with a low of 47 degrees Thursday night and a high of 51 degrees Friday, the storm is expected to generate a glaze of ice from freezing rain as well as 1-3 inches of snow along the I-95 corridor and in portions of northwestern New Jersey. 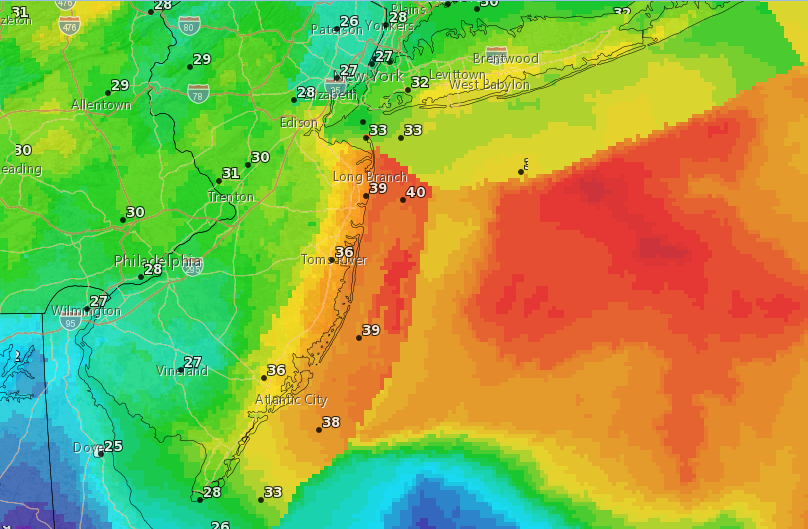 Closer to home, forecasters were expecting sustained winds 20 to 30 m.p.h. with gusts of 35 to 45 m.p.h. possible. The strongest winds will move through between Thursday evening and Friday morning, according to the NWS briefing. Minor coastal flooding is possible along the entirety of the bayfront during the high tide cycles Thursday afternoon and Friday.

If you are a member of #teamSnow and holding out hope that the forecast is suddenly going to bring more snow, we don't have great news for you. The chances of seeing 2+ inches of snow is quite low (<5%) for everywhere except for the higher terrain of the Poconos with this storm. pic.twitter.com/iUleSSKgQ8

Offshore, gale force east to northeast winds are possible late Thursday afternoon through Friday morning. A small craft advisory and gale watch were both in effect, with the NWS predicting 7-12 foot seas during the height of the storm Thursday night through Friday.

After the storm moves out, the NWS is forecasting an abrupt shift to westerly winds, which will remain strong, albeit under sunny skies. Saturday will bring sunshine and a high of 44 degrees.