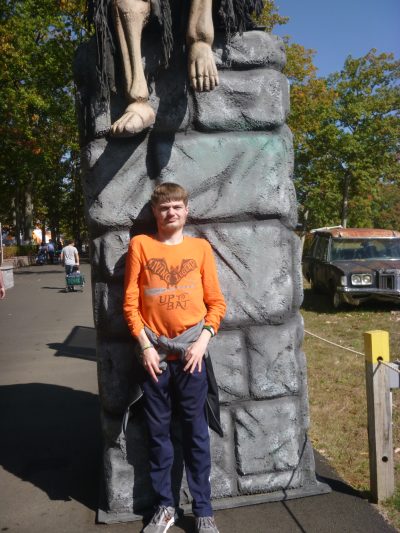 I am, by nature, a planner.

Over the years as my severely autistic non-verbal son has grown into manhood I am always thinking about his future, and how I can make it a safer and happier place for him. One of the obstacles I kept coming up against was that it had been at least fifteen years since he had spent the night somewhere other than his own bed without a parent sleeping in the room next to him. His father and I know he will be living in a group residence some day, and I just couldn’t let that be his first time ever sleeping without us.

For a few years I had been lobbying my husband for us to let him try sleepaway camp, and my husband was always adamantly opposed. He felt, and understandably so, that our son, who was in his late teens, would think we had abandoned him because we’d always taken him home before. I knew in my heart Justin would never think that, but couldn’t convince my husband.


Then Covid struck, and after its first year was over I knew we had to get serious and take a chance.

Both Justin’s school and I bought him calendars, and every day we’d write “school” or “home” in the big blocks. We did this for months before camp started. I also pulled out his scrapbook from three years prior and showed him pictures of him at the camp, and told him he’d be sleeping there, but that Mom would get him at the end of the week.
Find out what’s happening in Point Pleasantwith free, real-time updates from Patch.

I had no idea if he understood anything I said, but I had to hope.

Eventually the day came to take him to camp, and we packed up all his gear for the week and went. I saw him staring at the suitcases as I put him in the car, and noticed him gently rocking back and forth in the back seat, which usually means he is excited about where we’re going. I showed him the calendar again, and pointed out the coming week, with “camp” written in most of the blocks and then “home” at the end. The counselors had promised me they would hang up the calendar next to his bed and show him every morning.

I had to have faith they would.

We got to camp, his luggage was whisked away, I registered him, and then we were told to make our goodbyes. I whispered “have fun Justin, I love you, see you Saturday,” and then he was gone.

Leaving me both replete with hope, and with a giant lump in my throat I hoped I’d eventually swallow.

I made it until the next morning before calling the camp.

One of the lovely workers got on the line, said she’d seen him in his cabin that morning and he’d seemed fine, and they would only be in touch if there was a problem.

It was my cue to relax. We never did get another call the rest of the week.

Finally, Saturday came, and I drove up in the morning to collect Justin. I parked the car, told an administrator who I was here for, and waited to see my son arrive.

Within a few minutes he walked out with his assigned camper and stopped dead in his tracks, just looking at me. I said his name softly, and he slowly shuffled forward, with just the hint of a grin on his face. He came up to me, looked me in the eyes, and laid his head on my shoulder for a moment.

Then he made a loud exclamation and headed for the car. Moment over.

His “person” told me he’d been great all week, only a minor grab or two, and best yet, he’d seemed to have fun. Before we drove off I asked Justin if he’d had fun and would like to go back next year, and he gave me his gentle nod “yes,” which was enough for me. I admit, I drove home feeling ecstatic, knowing my boy could not only tolerate but thrive in a different environment than home or school, could potentially be happy living elsewhere than his mom, dad and brother.

It was the best moment of 2022 for me, and most importantly for Justin. I am so grateful to the employees at his camp and his school for helping to make it happen.

Happy New Year to all, and may 2023 bring all of us much to be grateful for!