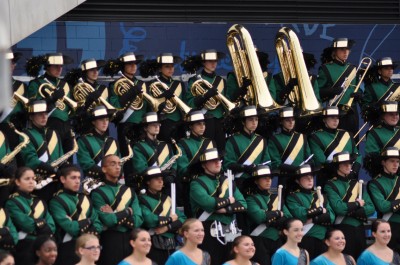 The Brick Township council will consider a resolution next week to suspend the township’s noise ordinance for both high school marching bands in Brick.

Suspending the noise ordinance would effectively end a controversy that began developing last Tuesday when police officers asked the Brick Memorial Marching Mustangs band to stop practicing outdoors after complaints were called in by neighbors who live near the high school.

As word of the incident spread, school and police officials renewed a previous agreement with the neighbors under which the band would rotate the locations of their practices between different parts of the school property and direct the sound in varying directions. The agreement was in place last year but a scrimmage on the school football field led to the practice being moved closer to the vicinity of some adjacent homes, Superintendent Walter Uszenski said Thursday.


A suspension of the township’s noise ordinance for both the Brick Township High School and Brick Memorial High School bands would exempt them from either some or all of the provisions of the law.

“I mentioned it on the radio and then I sent an e-mail to Dr. Uszenski when I got to town hall yesterday morning,” said Ducey, who spoke about suspending the ordinance when he called into New Jersey 101.5 radio on Thursday as the issue was being discussed on the station’s morning show. “We’ve done it for Walmart, we’ve done it for road construction projects, and different things around the town, so why not have it for this situation?”

The noise ordinance itself is a lengthy document, taking up an entire chapter of the township’s code book. The ordinance is in effect 24 hours a day and prohibits “excessive or unusually loud noise” within the township. Between 10 p.m. and 7 a.m., more restrictive decibel limits of 50 and 55 are in effect for residential areas, the exact decibel limit depending on the specific zone.

Ducey said even if the ordinance is suspended by the township council, he expects Brick Memorial’s band will continue to honor the agreement “just to be good neighbors.”

Mostly, the mayor said, suspending the ordinance would send a message to members of the band that what they are doing is positive and not something that is against the law.

Suspending the ordinance would require a majority vote from the seven-member township council. The meeting is scheduled for this Tuesday, Sept. 9 at 7 p.m.