Brick to Partner With BTMUA On Snow Plowing 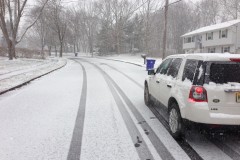 Brick Township will partner with the Brick Township Municipal Utilities Authority – technically, a separate government entity – to help with snowplowing efforts this coming winter, as it has in years past.

The township uses a combination of its own public works employees and contractors to plow municipally-owned roads in town, but the MUA will supplement the township crews and limit the amount Brick taxpayers will have to pay contractors, officials said.

“Their rates are much cheaper than the regular contractors when we go out to bid for it,” said Council President Susan Lydecker.


Lydecker said the BTMUA employees will be paid their standard wage for snow plowing. The council, in July, added a number of local construction firms to a pool of contractors to be called on during snow events. They capped the amount to be spent on contractors at $800,000 for the season.

Earlier this month, the township awarded its road salt contract to a Massachusetts company in preparation for the coming winter months.