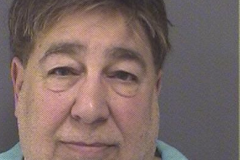 The man arrested Thursday alongside Brick schools Superintendent Walter Uszenski did not disclose a 1989 arrest and conviction on charges he sold cocaine to undercover New York City police officers.

Andrew Morgan was a 41-year-old special education English teacher in the Canarsie section of Brooklyn when he was arrested with Jay Dubner, then 38, a special education administrator, according to a New York Times report from May 10, 1989.

Morgan – whose wife, Lorraine Morgan, is the Brick district’s Academic Officer today – was arrested Thursday for his role in a scheme to help Uszenski allegedly take $40,000 in daycare and transportation services from the district for his grandchild, who was not entitled to those services. Morgan, who Uszenski recommended to be appointed as the district’s Interim Director of Special Services, engineered the scam, prosecutors say.


The Ocean County Prosecutor’s Office said Thursday that Morgan failed to disclose his conviction stemming from the 1989 botched drug sale when he applied for a job with the Brick school district. According to the New York Times article, Morgan had been charged five times with selling cocaine, as well as conspiracy to sell heroin, at one point allegedly agreeing to fly to Thailand in order to buy heroin for undercover agents posing as drug dealers.

At the time of the May 1989 arrest, Dubner sold cocaine to Morgan in a car parked on Ocean Boulevard in Brooklyn, packaged in an official Board of Education envelope.

All the time Morgan worked in Brick, two articles on his case were published on the New York Times website for all to see.

Morgan was ultimately convicted on felony drug charges, the Times reported. He fought his tenure charges in New York, and eventually sought $35,000 in back pay from the New York City school system.

Morgan resigned from his position in Brick on Dec. 31, 2013, having been paid about $60,000 in compensation between March 1, 2013 and Dec. 31, 2013, said Al Della Fave, spokesman for the prosecutor’s office. Morgan also runs a company called Morgan Associates for Children with Special Needs, according to a New Jersey Department of Education disclosure statement provided by Lorraine Morgan.

Morgan, following his arrest Thursday, made $100,000 cash bail and is no longer an inmate at the Ocean County Jail, records showed Thursday night.