Why Dangerous Jellyfish Are Washing Up In N.J., and How Long They’ll Stay 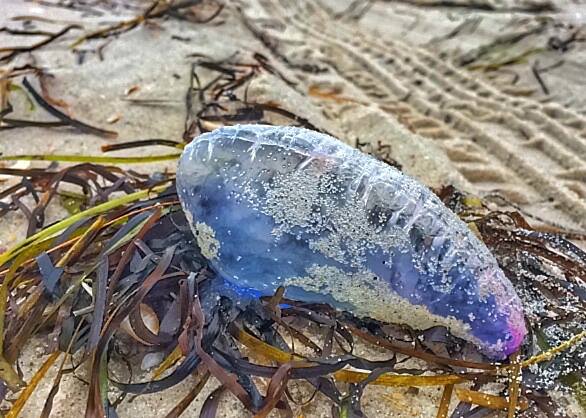 The Portuguese man o’ war, a jellyfish-like creature that packs a painful, and occasionally dangerous, sting has been washing up on Shore area beaches for the past week, giving beachgoers pause about entering the water as the July 4 holiday weekend approaches.

After one such creature was initially spotted in Harvey Cedars June 20, more than two dozen washed up on the beach in Surf City this past Saturday, with more being spotted at Island Beach State Park, Ship Bottom and Stone Harbor on Sunday.

Man o’ wars pack an agonizing sting that can last for about an hour after a human comes into contact with the marine cnidarian – which is actually a group of organisms fused together that appears as one gelatinous creature. People who are allergic to the species’ venom often need to be hospitalized.

Man o’ wars, known as Bluebells in Australia where they are most commonly found, follow the path of the Gulf Stream, explained Dr. Paul Bologna, Director of the Marine Biology and Coastal Sciences Program at Montclair State University. If there is a sizable population present in the offshore current, plus a few days of strong northeasterly winds, man o’ wars can begin to show up on shore in New Jersey. But even with the right combination of wind and current, sightings are rare in the Shore area.

“You have to have a pretty good population of these guys to see them show up in abundance,” Bologna explained.

Even in states with warmer ocean waters such as Florida, sightings of man o’ wars occur on an occasional – not a regular – basis. But six to eight weeks ago, beaches in the Sunshine State began experiencing washups of man o’ wars similar to what seems to be occurring now in New Jersey.

Bologna’s team of biology students were planning on scouring the beaches at Island Beach State Park this week to find specimens, preserve them, and test their DNA to see if the current crop of man o’ wars is the same group found in the southeast or a different group that somehow found their way northward.

“They’re pretty uncommon up here, but there are records that go back 100 years of them showing up in this area and Cape Cod,” Bologna said. “So they’re around, but you need the right combination of the Gulf Stream and coastal winds to bring them to this area.”

“We would always get butterflyfish in our little traps during the summer because the larvae are coming up and they make it into the estuaries,” said Bologna, recalling his own graduate school research. “The process is fairly common, the Gulf Stream brings stuff up from the tropics, and they get settled through.”

How Long Will They Stay?

While scientists such as Bologna have a decent handle on how the man o’ wars got here, there are no hard rules about how long they’ll stick around. The estimates, given the course of the Gulf Stream, provide a decent idea, however.

“Probably for the next couple of weeks, we’re going to continue to see them scattering along the coastline,” Bologna predicted. “Eventually, they’re just going to get pushed further offshore, and probably move to the north.”

The Gulf Stream “is like any river, where it kind of meanders around,” he said.

There will likely be more sightings of man o’ wars, Bologna said, for the simple fact that more people than ever before are looking for them – and every discovery can be quickly transmitted to the masses via social media. Bologna and his research team at Montclair State are even planning additional Jellyfish Spotter educational sessions this summer to train local residents on how to spot and handle rare jellyfish on local beaches. Spotters are currently sharing their finds on a Facebook group, he said.

“Everybody is looking for them now,” Bologna said.